Meat Glaze doesn’t warrant its own listing in The Prawn Cocktail Years, but it is used as an ingredient in quite a few of the recipes. It takes a while to make, so they recommend that you make it in advance and freeze it. Instructions for making it are found as part of the recipe for Oeufs en Cocotte, but is also used in Tournedos Rossini, Beef Wellington, Steak au Poivre, Rognons Sautés Turbigo and Sirloin Steak with Red Wine Sauce. It looked a little involved so I thought I ought to get it out of the way. 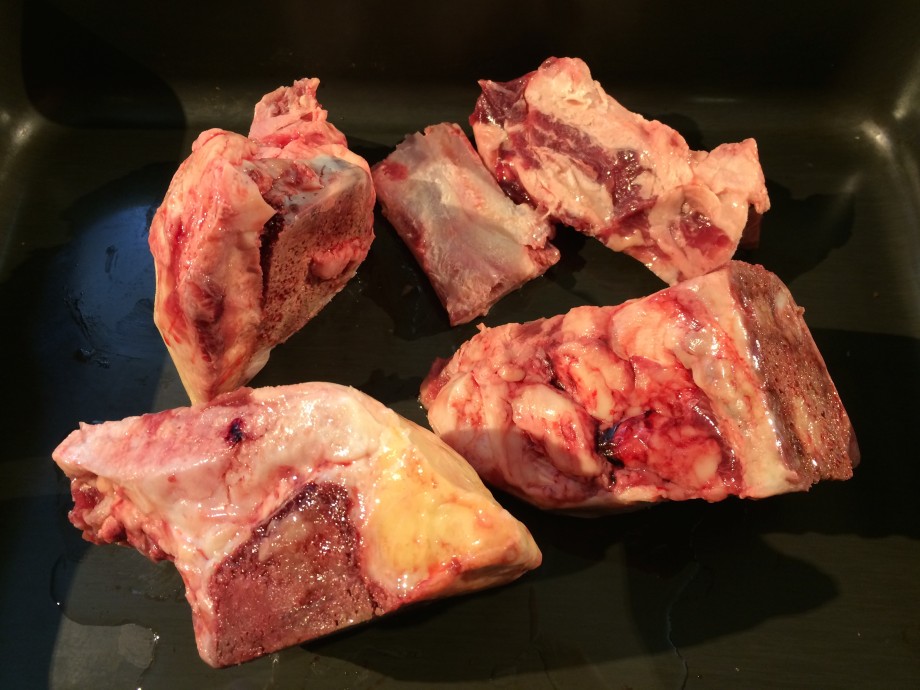 I’ve never made this before, it’s always looked like too much faffle to be bothered. The recipe itself looks pretty straightforward, it just takes lots of time. So, here goes. The recipe calls for veal bones. I have beef bones from my Well Hung meat box, so I figured it would be OK to use those instead. First off, the bones get roasted in the oven. I drizzle them with a little oil and put them in a roasting tin. 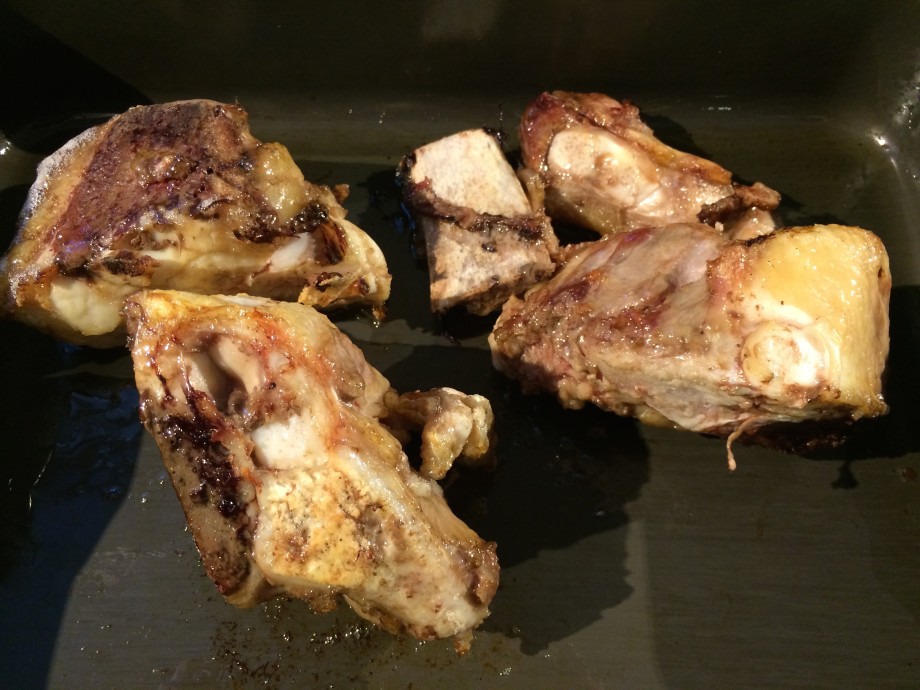 Half an hour later, I add some chopped beef and cook that together with the bones in the roasting tin on the hob. Next, some chopped vegetables and tomato puree is added, and the mixture cooked for a fee more minutes. Wine is added and reduced a little, and then the whole thing emptied into the stock pot. 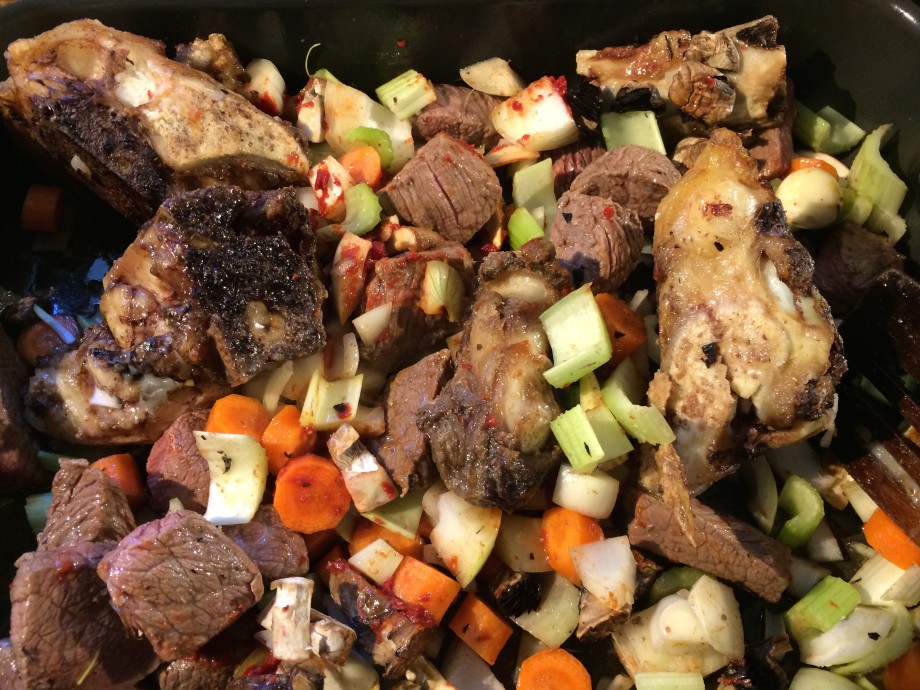 I add 2.3 litres of cold water and some herbs. Once again, the recipe calls for a stock cube to be added at this point. I really don’t understand why such an elaborate stock recipe calls for the addition of a stock cube, so I miss it out. I let the stock come to the boil, skim off the scum that rises to the top and then leave it to simmer very, very slowly. Four hours later, I drain the stock into a bowl, let it cool and then put it in the fridge overnight. 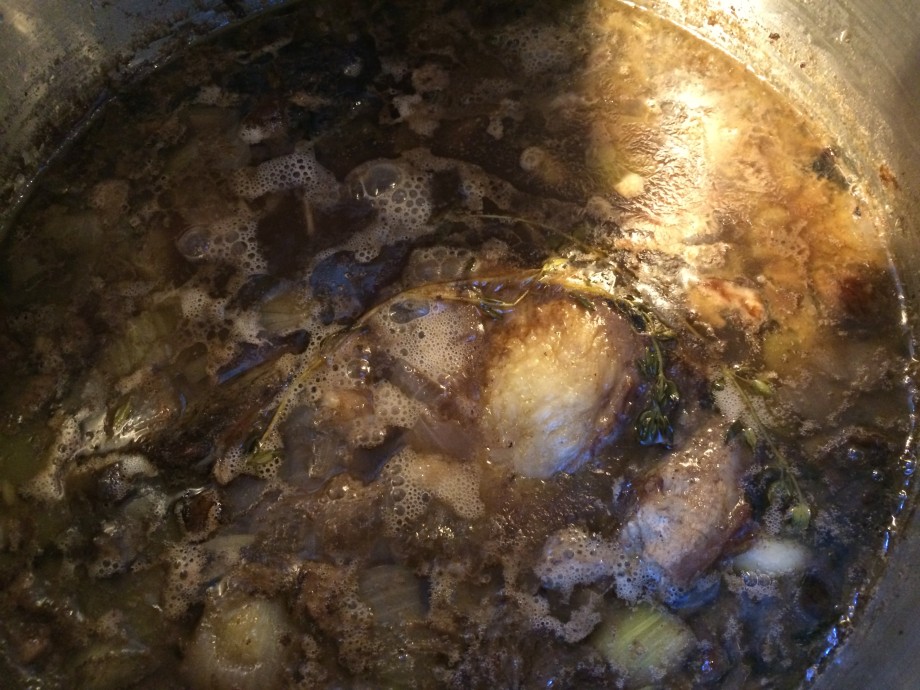 The second stage: I take the stock out of the fridge and remove the fat that has solidified on the surface. There’s a layer of sludge at the bottom, but the recipe doesn’t say I should strain the stock. The sludge doesn’t feel right, it’s just going to get more dominant once the stock is reduced, so I decide to take matters into my own hands and strain the stock through some muslin. That looks much better. I pour the strained stock into a pan, gently bring it to the boil and then leave to simmer while it reduces. I pour the finished meat glaze into a jug – I started out with a large stock pot full – nearly two and a half litres of liquid and a large heap of beef, vegetables and bones, and now all I have left is around 300ml of meat glaze. 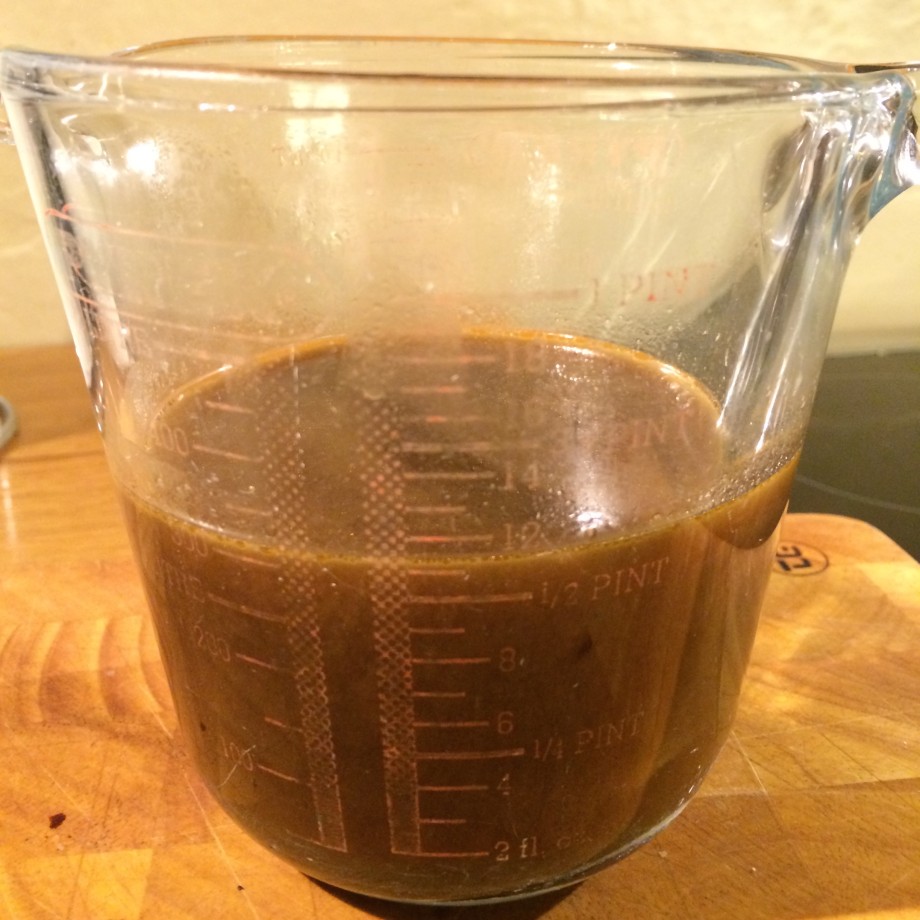 I take a spoon and taste it. Wow! This stuff is fabulous! It’s so rich and delicious and, well, meaty. I could stand here and eat spoonfuls of the stuff, but I restrain myself: it’s very precious – there’s such a small amount of it. I let it cool and put the jug in the fridge. Once chilled, the glaze becomes a jelly, and I spoon it into ice cube trays and freeze, not forgetting, of course, to lick the spoon.

Well, in a way it is – but it isn’t. Dave started with our large stock pot full of beef bones, meat and veg and made stock. Then days later, after several different processes, he was left with just over 1/2 pint of what looks more like gravy.

Then he gave me a sip on a spoon. Wow! This is not stock as we know it. It’s so rich and thick, almost setting to jelly as soon as it was on the spoon. Sort of like really excellent quality Bovril. I don’t know what he intends to do with this meat glaze, but whatever it is, it’s going to be nice.