By dopiaza on 17th July, 2016 in The Fifties Hotel Dining Room

I don’t believe I’ve ever eaten Chicken Maryland in my life. I remember seeing it on restaurant menus back in the 1980s, but haven’t seen any reference to it in more recent days. In fact, I think the only time I have been directly exposed to it was many years ago when I was sent on a trip from work to spend long days stuck in dull meetings with colleagues in Florida. The air outside was incredibly hot and humid, whilst the offices were air-conditioned like crazy and often a little on the nippy side. I think it’s the only place I’ve worked where you took a jumper (or ‘sweater’, in US parlance) to put on when you went inside and take off when you went out.

One evening, eating out with another UK colleague, he chose Chicken Maryland from the menu. I awaited its arrival with curiosity, although when it was finally served, I was slightly disappointed that it appeared to just be a big plate of deep-fried stuff – exactly like pretty much every other meal we had in Florida. He wolfed it down though, so I guess it was tasty enough.

So, The Prawn Cocktail Years describes Chicken Maryland as “frankly weird” and looking through the recipe, I can see why. It’s basically Southern Fried Chicken served with an array of other fried or grilled foods – bacon, sweetcorn fritters and fried bananas. So, on with the fry-fest.

It all starts the day before we eat: I need to make chicken stock. Following the Prawn Cocktail Years’ recipe takes a good three hours of watching a large stock pot slowly, gently blip its way through the afternoon. It’s worth it though – this makes an incredibly delicious stock. The stock gets strained into a bowl and then put in the fridge overnight to set into a rich, unctuous jelly. 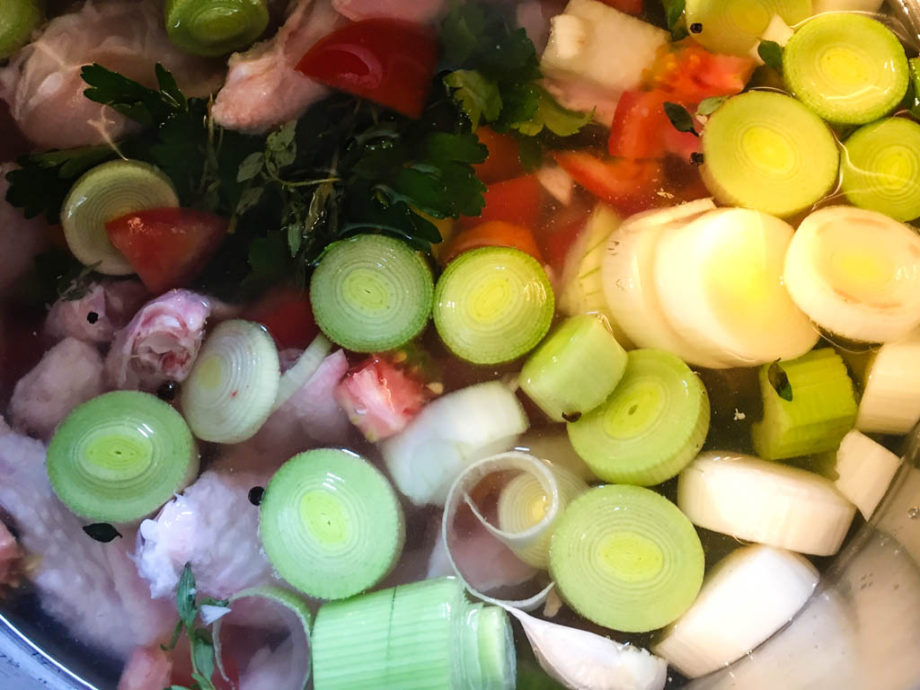 The next day, I’m ready to fry. I’m not expecting this to be a quick and easy meal. There are so many steps, so many things to cook. I guess I’d better get on with it. It all starts with the chicken. This is a ‘Serves 4’ recipe, and whilst there are only two of us, I figure leftover fried chicken is always a good thing to have in the fridge, so I’ll be cooking for four. Well, that is the plan until I realise that the pan I plan to use isn’t going to hold all eight of the rather generously sized chicken thighs I have. OK, serves three then, at least as far as the chicken goes.

I start by coating the chicken in seasoned flour, dipping in egg, and back in for more flour. As I measure out the flour coating, it looks like a rather scant amount for the six chicken thighs sat before me. I decide to double the amount of flour and spices in the bowl. After coating four of the thighs, it’s clear that even this doubling of quantities was wholly inadequate – there’s almost no flour left. I quickly mix up some more to finish the final two thighs. 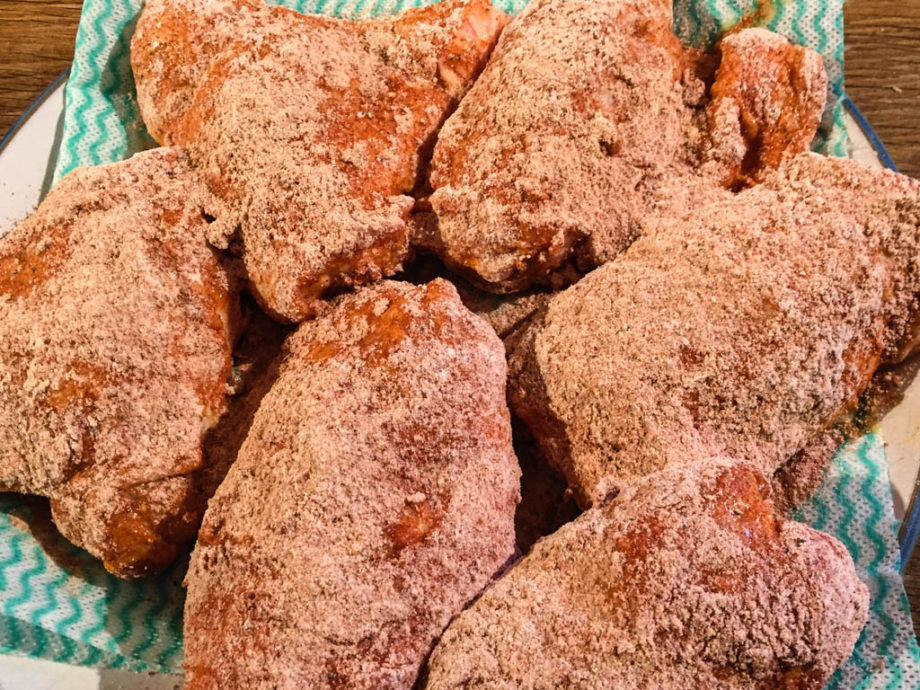 The chicken goes into a cast iron pan, loaded with a healthy measure of butter and oil, where it fries gently for about half an hour. The pan’s a little more crowded than I would like, but it will have to do. 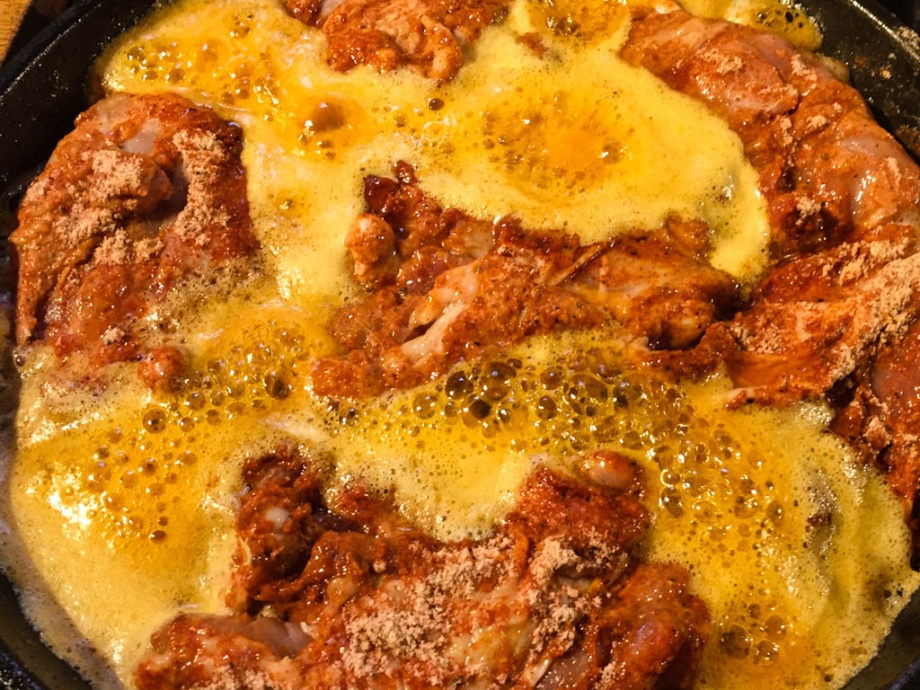 Half way though the cooking, I turn the thighs – they’re a little overdone on the first side, but not too bad. 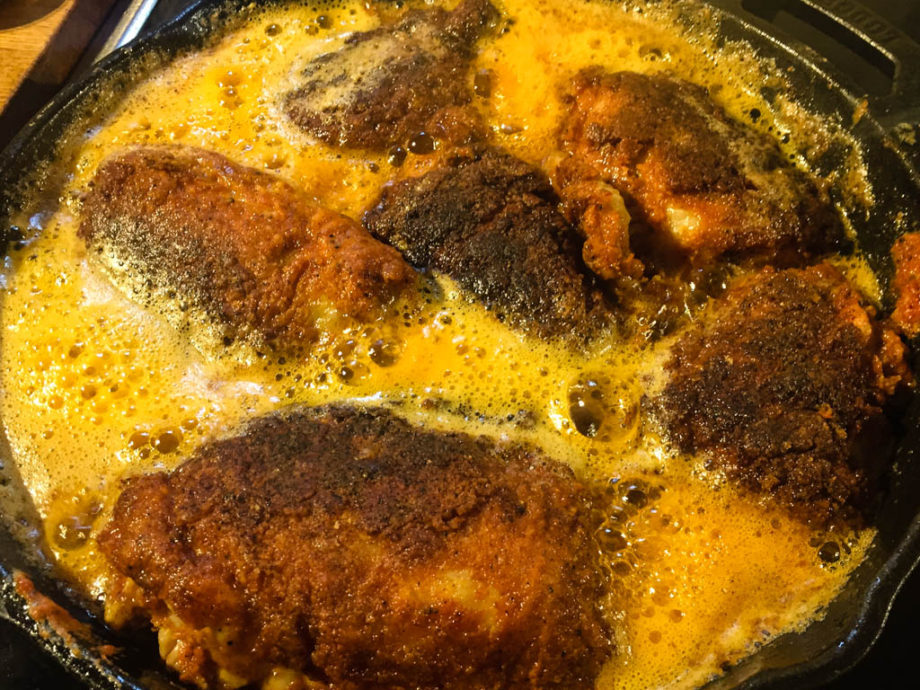 Whilst all that is going on, I prepare the sweetcorn. I take a fresh sweetcorn cob, cut the kernels off it and then cook them in a pan of boiling water for a couple of minutes until tender, and then rinse under cold water to cool. The kernels then get mixed with egg yolks and seasoning. I beat the egg whites until firm and fold them in. Finally, baking powder and breadcrumbs are added and the mixture put to one side. 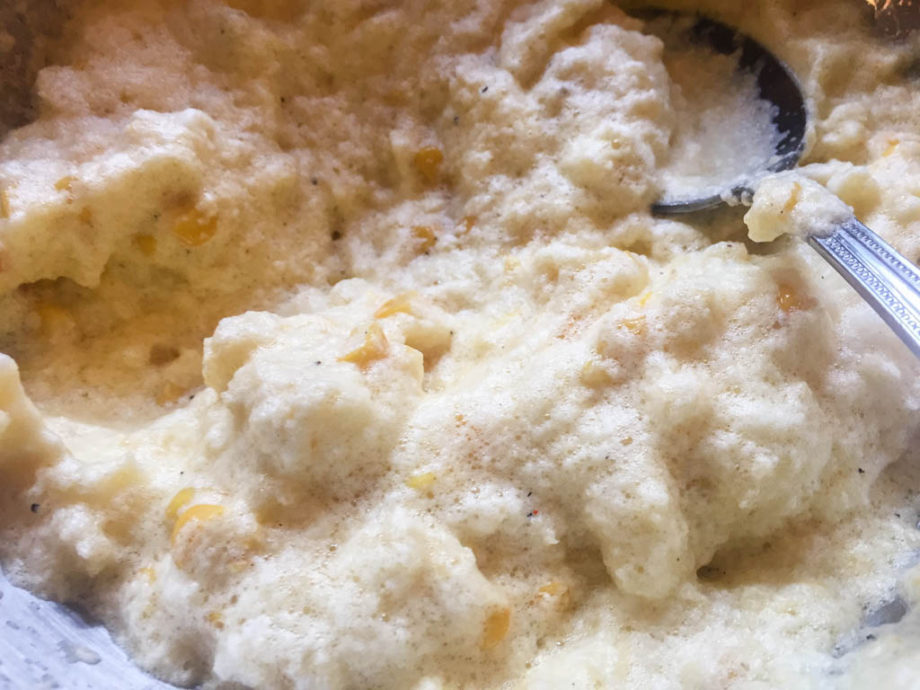 By now, the chicken is done, so I remove that from the pan and put it in the oven to keep warm. I clean out the pan and start frying the sweetcorn fritters – a few minutes on each side until puffed and golden. Once cooked, the fritters go into the oven along with the chicken. 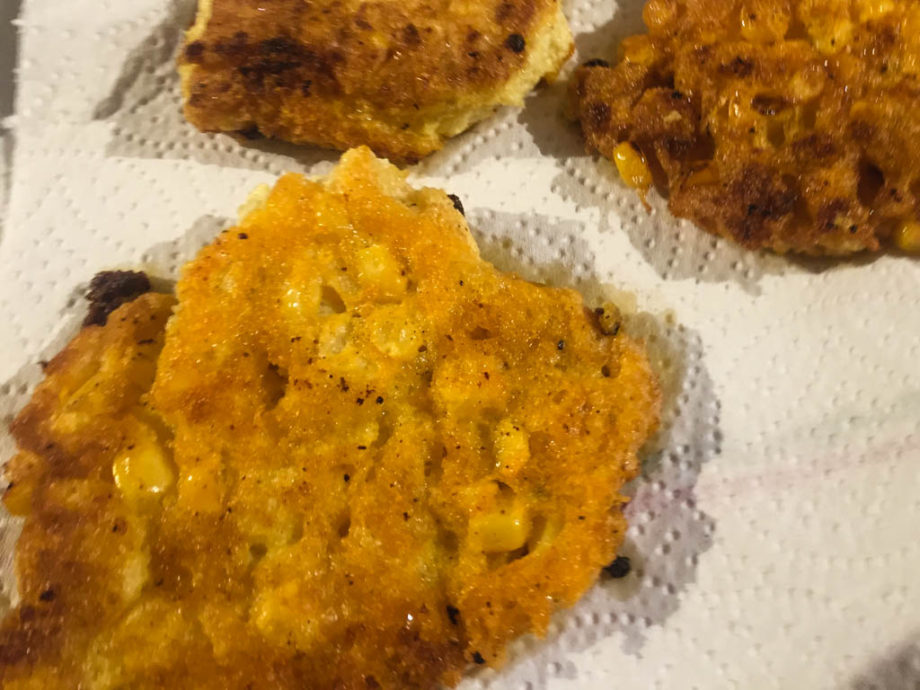 Next, I heat up the grill and start cooking the streaky bacon. I leave this under the grill while I start the sauce. The sauce consists of a small amount of yesterday’s chicken stock, reduced by three quarters, then cream and lemon juice added. The amounts look paltry, even for the two of us – if I really were cooking for four, it would make for a very scant portion indeed. I decide to double up on the sauce recipe and start reducing my stock.

As that simmers, I prepare the bananas. The bananas are peeled, cut in half lengthways and then fried in butter. Once the bananas are ready for the pan, I see the the stock is now reduced and take it off the heat. Now, what next? The bacon. I forgot the bacon! I’m just in time – another minute or so and it would be starting to burn – this is spot on, perfectly crispy. That was a close thing. 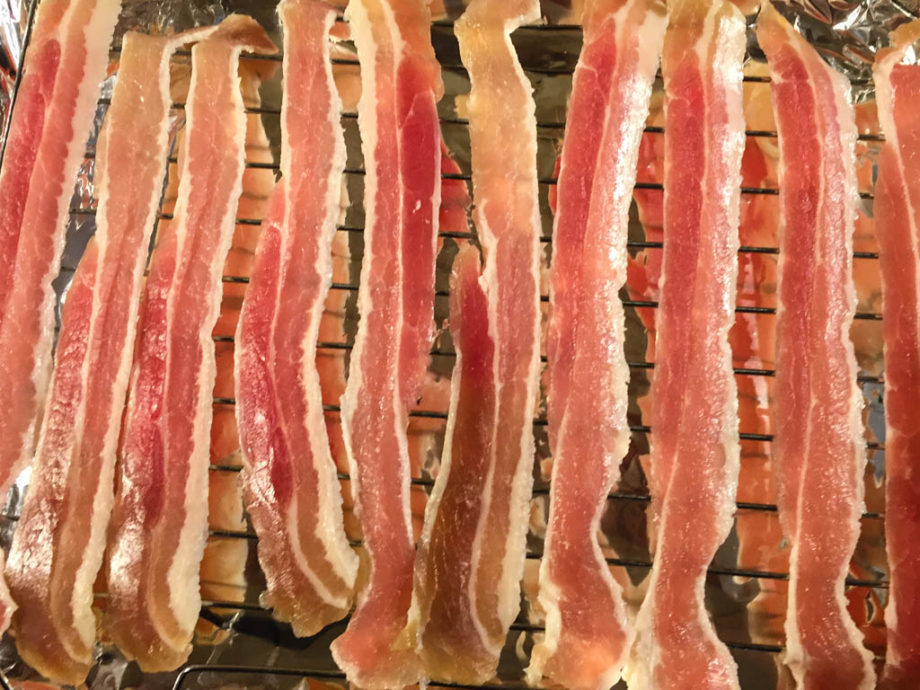 I’m hot. In fact I’m absolutely sweltering. It’s already an unusually hot and humid day, and add to that the hot stove and oven, all this frying, and rushing about trying to keep so many things progressing at once, I feel l’m about to melt. I’m reminded of those hot and sticky days in Florida where I first met Chicken Maryland. I do wish I had a nice cool air-conditioned office to step into right now.

So, into the oven with the bacon, and melt butter in the pan for the bananas. I’m no stranger to frying bananas. In my younger days I would sometimes fry some rashers of bacon along with a banana for a lazy weekend breakfast – the two always went together very nicely. It’s many years since I did that though, I’ve just drifted out of the habit. 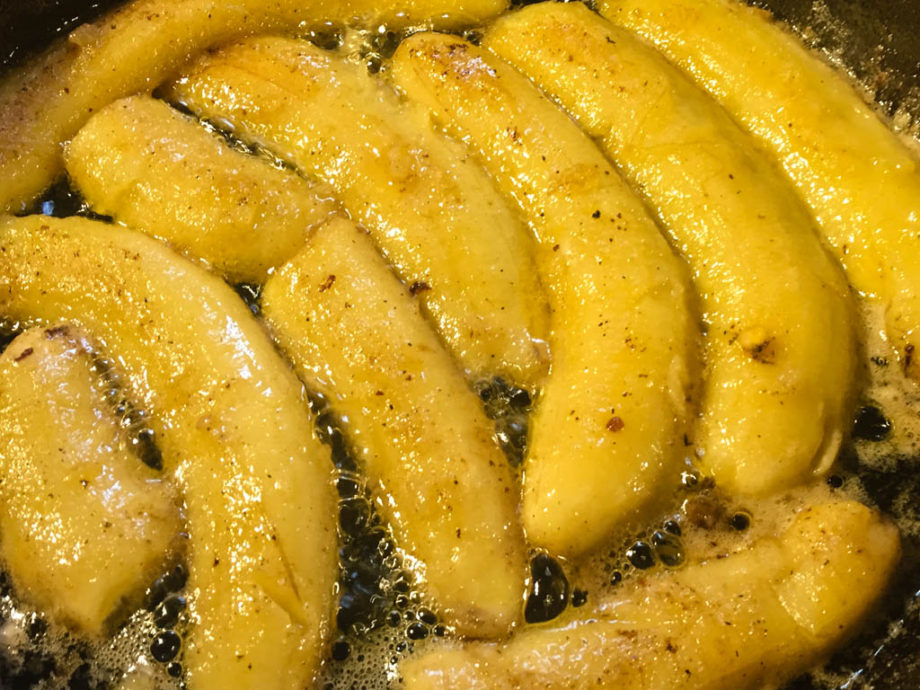 The bananas don’t take very long to cook, and they get sprinkled with a little sugar to help caramelise them. They do get soft as they cook, so removing them from the pan gets a little tricky – luckily I end up breaking only one. And into the oven they go.

We’re nearly done. The only thing left is to finish the sauce. I take the reduced stock, add cream, lemon juice and a little seasoning, bring it back to the boil and then stir in some chopped parsley.

There seems to be masses of food in the oven by now. I take it out and arrange it all in a large dish. The recipe says to spoon a little sauce over each piece of chicken and serve the rest in a hot sauceboat. They’re kidding, right? Even after doubling the sauce quantity and reducing the number of chicken pieces, there’s nowhere near enough sauce to do all that. I’ll just serve the sauce on the side.

Finally, the instructions say, “Tuck sprigs of curly parsley here and there, to brighten up what is essentially a beige dish.” Beige, it certainly is. I’m hot, sweaty, and weary by now. I just want the get this thing to the table and sit down, but it does need a splash of colour. I tear off sprigs of curly parsley and cram them in between the lumps of beigeness on the plate. This is far from elegant, but I’m suddenly past caring. The beige platter, adorned with scraggy sprigs of green, goes into the dining room. 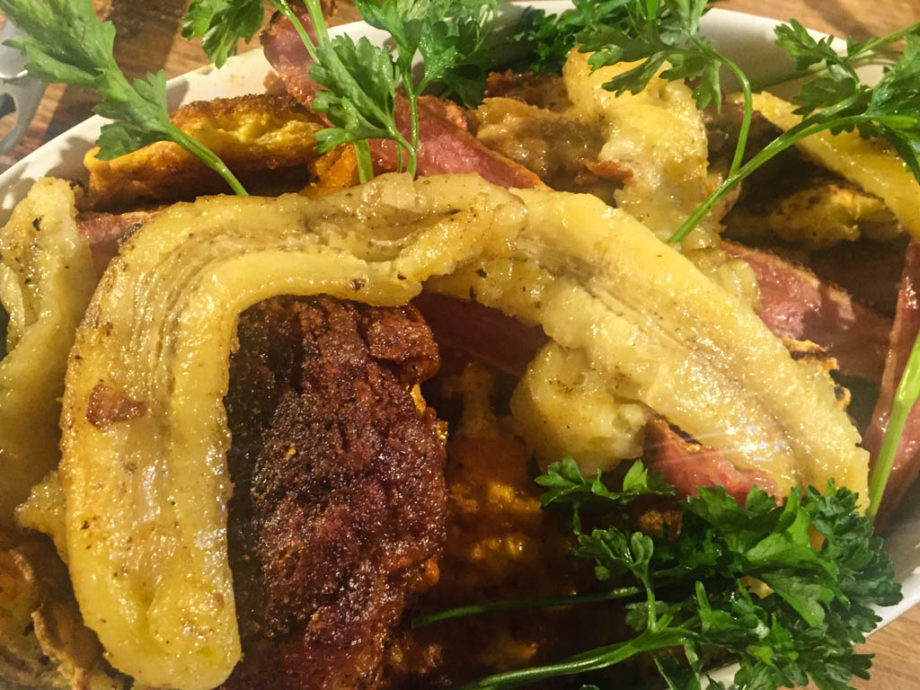 This one was hard work. The heat of the day, topped up by the heat of the kitchen, certainly didn’t help, but it also seemed to take forever. But now, it was time to eat.

I’m sure I would have enjoyed this much more if I’d been less exhausted, but even so, this was really good. The chicken tasted good; the sweetcorn fritters were light, soft and very corny in flavour; the bacon was perfectly crisp. But the highlight was the bananas – the soft, silky sweetness managed to balance the fatty heftiness of all that meat. And the sauce was delicious – worked perfectly with everything.

I’m not sure I’m up to making this whole thing again, but it really was all very good. Perhaps I can trim back on a few elements and do something similar. At the very least, I think fried bananas need to make a comeback into my life.

I’d heard of Chicken Maryland but never had it nor knew what it was.  Basically it’s chicken and banana!  Very calypso really.  And it was really rather nice.  But the sheer volume of work that went into the making of the stock for the meagre sauce was way out of kilter with the end result.  Possibly if there had been a lot of sauce I would have thought differently.  The sauce was indeed lovely, but so scant.  And Dave had doubled the recipe!

The chicken pieces were rubbed with spices and fried.  Nice.  Could have had more spices.

The banana fried in butter was a first for me, but it does go ridiculously well with the bacon and chicken.  And finally the nice sweetcorn fritters, which I am partial to anyway.

All in all a nice meal.  But not spectacular.  Definitely something I’d love to eat again, but I think a few corners would need to be cut to make it possible to make it with a bit less effort.  It’s a nice dinner rather than a restaurant style meal.  I’d not turn my nose up at it though.  Just make lots of sauce!

One Response to Chicken Maryland