Fish Cakes sound like a nice easy thing to make for a weekday meal, I thought. We can have those on Monday. They won’t take very long to make, especially if I cook the salmon in advance. Well, that was the theory.

So, Sunday afternoon whilst making the Beef Stroganoff, I wrap a piece of salmon fillet in some tin foil, together with a dash of white wine, and cook it for twenty minutes. I leave it to cool and put it in the fridge. We’re having boiled potatoes with the stroganoff, so I’ll just make extra and then I can use the leftovers in the fish cakes. This planning ahead thing is great – Monday night’s dinner will be so easy. I get on with the stroganoff and forget about the salmon until the next day. 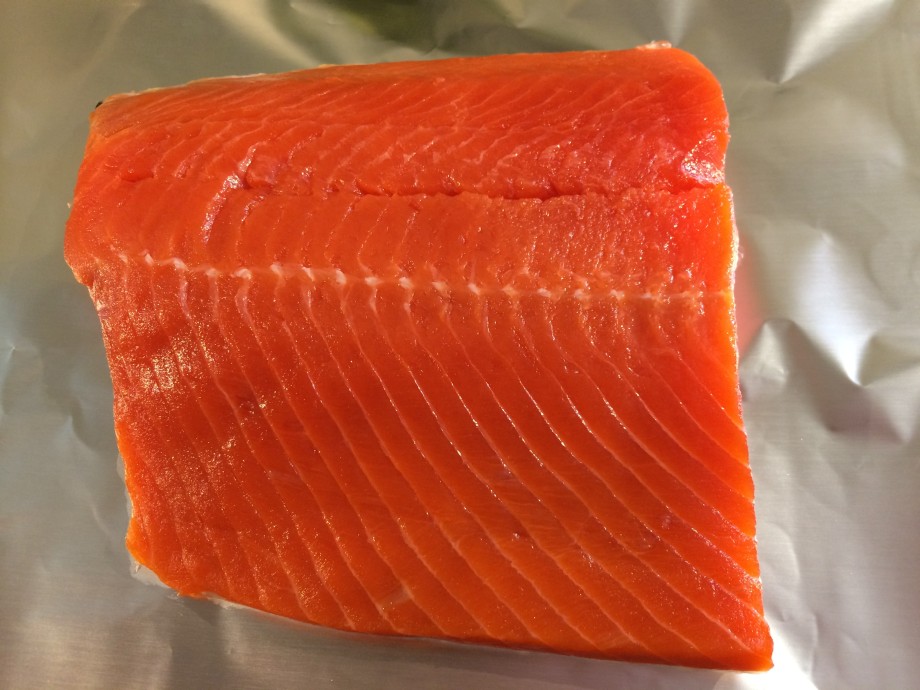 Monday evening: time to make the fish cakes. I take the salmon and the boiled potatoes out of the fridge and weight the potatoes. My heart sinks. I thought I had plenty, but I’m 30g short. Is 30g going to be a big deal? It’s not a huge amount, but it represents 12% of the total potato. Looking at it that way, I guess it’s quite a lot. I sigh, and decide I have to make up the shortfall. I get a small potato and peel it. It looks rather lonely on its own in a pan of boiling water, but at least I will have enough now. But what about the fish? I weigh the salmon. Once I’ve removed the skin, it’s just 5g under what I need. Well, that’s a tiny amount. Besides, I haven’t got any more salmon – that will have to do.

I need four boiled eggs and put those on to cook whilst I get the rest of the ingredients ready. Some chopped spring onions, parsley, lemon rind. I also need some of that ever-elusive anchovy essence again. I chop up a couple of anchovy fillets as a replacement – it worked in the Shepherd’s Pie, it will work here. 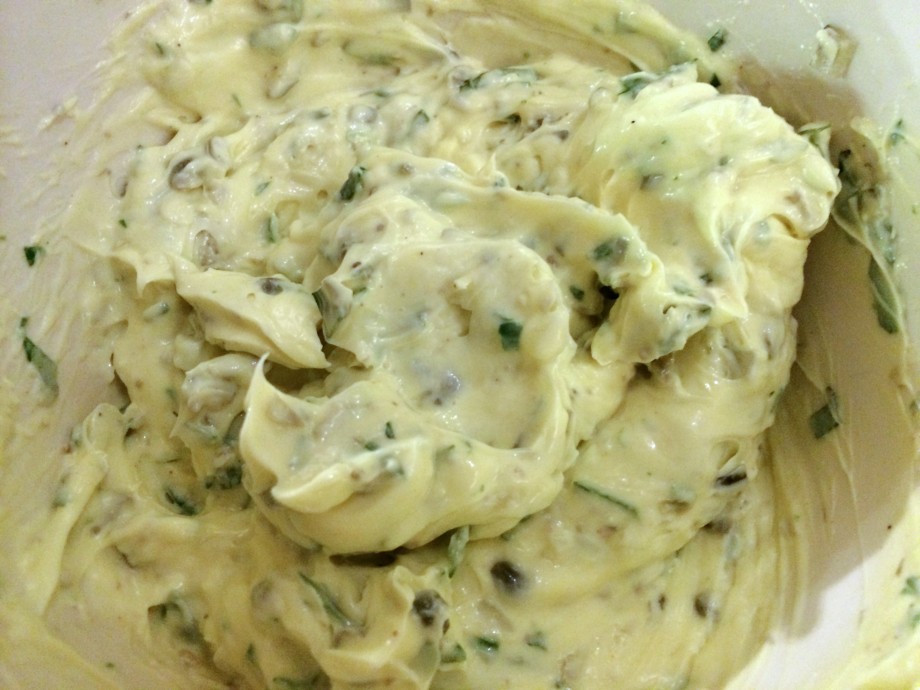 The eggs are ready, so I put them into cold water to cool. We’re nearly done. I start to sort out a little salad to go with the fish cakes when it suddenly dawns on me. I’m supposed to serve these with tartare sauce. I have to make tartare sauce. I had completely forgotten about that! I abandon the salad. The tartare sauce is found in the Scampi with Tartare Sauce recipe. That starts with ‘1 quantity mayonnaise (see page 52)’ – page 52 is Russian Salad. So, I start with the mayonnaise. This is pretty straightforward, I made it for the Prawn Cocktail, but I wish I’d remembered to do this earlier. I use the food processor – none of this manual beating here – and the whole thing doesn’t take too long. Then, mayonnaise in hand, I’m ready to make tartare sauce. I chop gherkins, capers, tarragon and parsley, add to the mayonnaise and mix it all together with some pepper. It doesn’t taste at all bad. 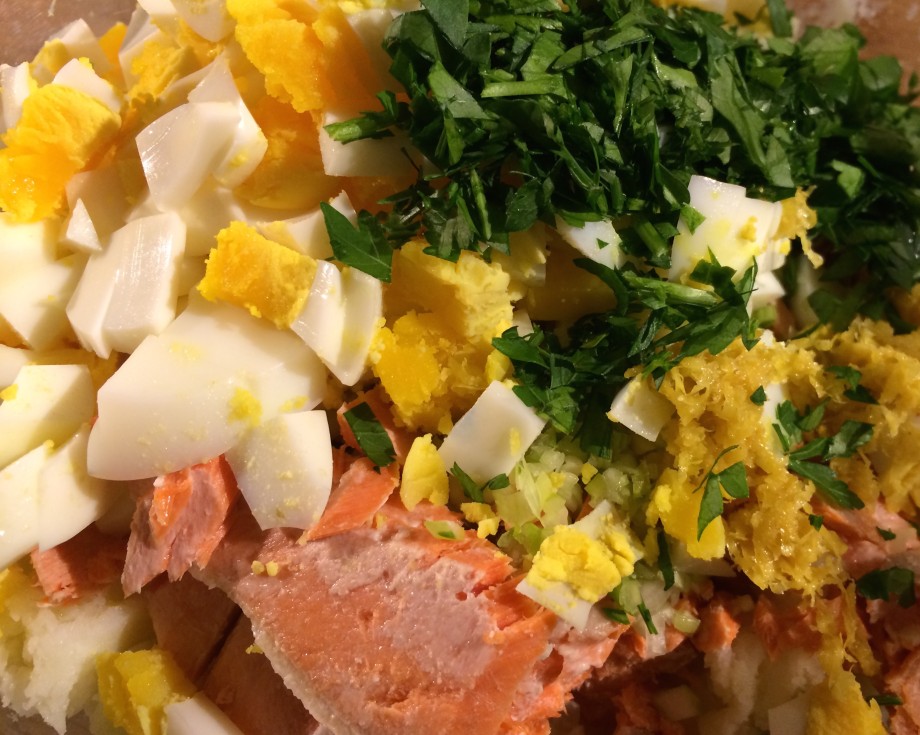 Right, now that little interlude is out of the way, I return to the fish cakes. I flake the salmon, shell and chop the eggs, add the spring onions, parsley and lemon, and mix it all together. To bind it all together, I beat cream and egg yolks together and mix that in, together with the anchovies, then form the mixture into individual fish cakes, laying them on a chopping board. They feel a little soft, but they seem to be holding together OK, so I look at the recipe to see what’s next. ‘Chill for about 30 minutes until firm’. I must have glossed over that when skimming over the recipe earlier. Another delay, and I’m getting hungry now. So, I go to put the fish cakes in the fridge. 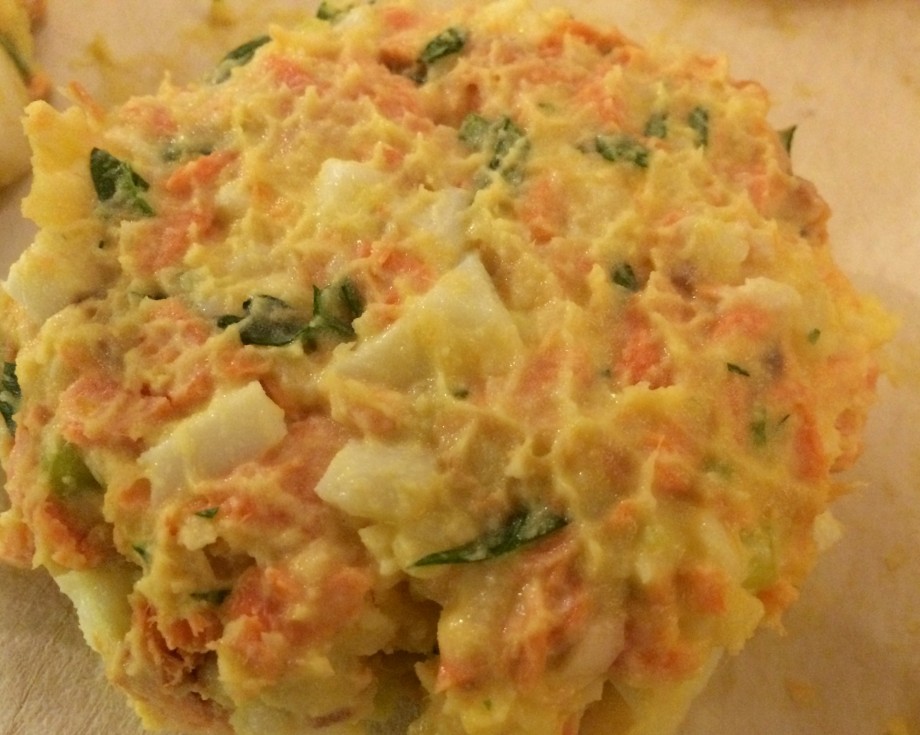 The fridge is full. There’s no space for a chopping board in there. There’s nothing for it but to empty a bunch of stuff out of the fridge to make space and I take a bunch of stuff off the middle shelf. It’s mainly some cheese, some pots containing a few remnants of cream and a bowl of the left over stroganoff, it’ll be alright sat by the kettle for a little while. The fish cakes go in the fridge. I’ve now got half and hour to kill, so I flop on the sofa. Dinner is now seriously behind schedule.

Eventually, I get to the point where I can cook the fish cakes, so I take them out of the fridge, and put back all the things I’d had to remove. I heat some olive oil and butter in a frying pan, dip the fish cakes in some flour and then fry. 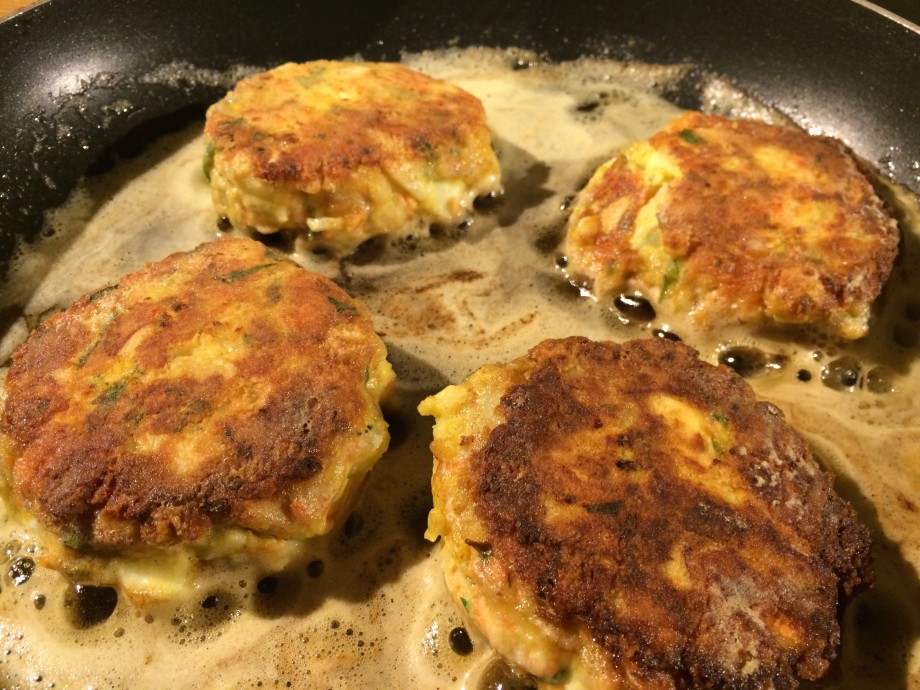 Finally we’re done. I serve them with some lettuce, tomato and the tartare sauce. 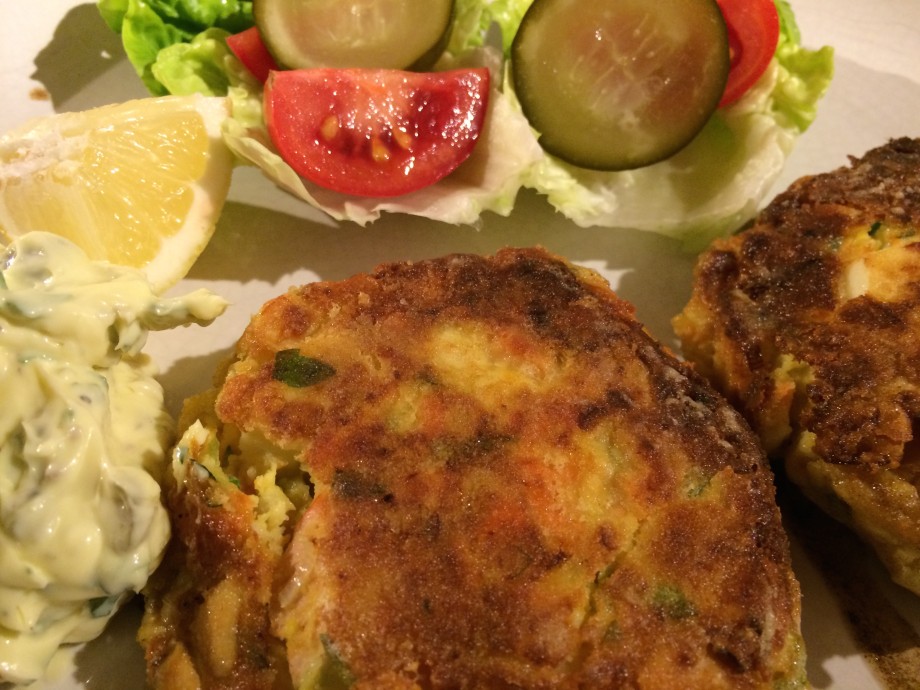 They’re much softer than many fish cakes I’ve had, but very tasty. Good fish flavour, not too potatoey. The hard boiled eggs were an unusual addition, but I thought they went well – I think I should have chopped the eggs a little finer though. And the tartare sauce was a perfect accompaniment. I may have served this meal well over an hour later than originally intended, but I think it was worth the wait.

I really like posh fish cakes (always disliked those weird things that came out of boxes marked “Birds Eye” or “Findus” as a child), and these are very nice posh fish cakes!

The predominant taste was the salmon, which is good. But they have hard boiled eggs chopped into them, that was a nice surprise. They don’t contain breadcrumbs and the only flour used is a light coat before cooking. But this lack of flour, coupled with the fact that the potato is chopped into pieces rather than mashed, means they are quite loose. I have no idea how Dave flipped them in the pan. I would have liked them to hold together a little better as I seemed to be chasing them around the plate and ended up scooping rather than forking them.

All in all though, a very nice Monday evening meal. I will definitely be encouraging a rematch of this one.