By dopiaza on 9th April, 2017 in The Sixties Bistro

As I’ve said before, I’m not much of a pudding person, and so far, I’ve shown a definite bias towards the savoury recipes in the book. I can see the desserts are starting to pile up, so I need to address that – otherwise I’ll end up with nothing but puddings left. I’d better make something sweet for a change. I want something easy, not too much faffle and so what could be easier than chocolate mousse.

Now, I’ve never made The Prawn Cocktail Years version of chocolate mousse before for one reason in particular: the recipe calls for espresso. Now, I like chocolate, I like coffee, but put those two things together and you get one of the most vile flavours that has ever existed. There is no way I could eat a coffee-flavoured chocolate mousse. I can’t just omit the coffee though, that would change the amount of liquid in the recipe and so almost certainly affect the texture. What could I do?

The recipe suggests serving the mousse with a float of Grand Marnier on top, and that appeared to offer the perfect solution – if I replaced the espresso with Grand Marnier, I would be staying relatively true to the recipe, and I’d get something with a pleasant flavour rather than something that I would find totally inedible.

I start with some 70% chocolate. 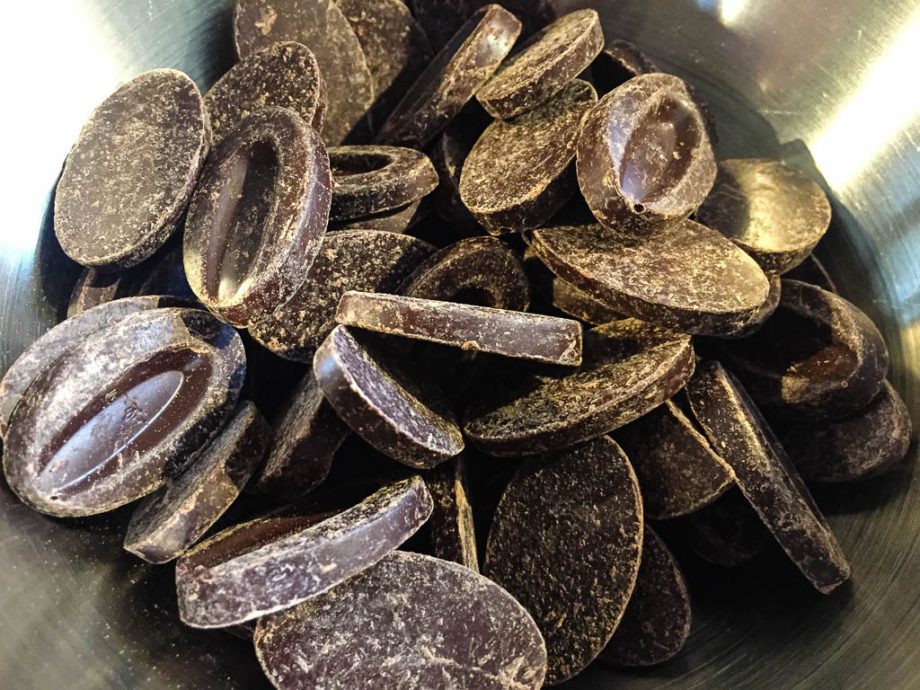 I melt it over a pan of hot water, together with some butter, the Grand Marnier and a splash of rum. 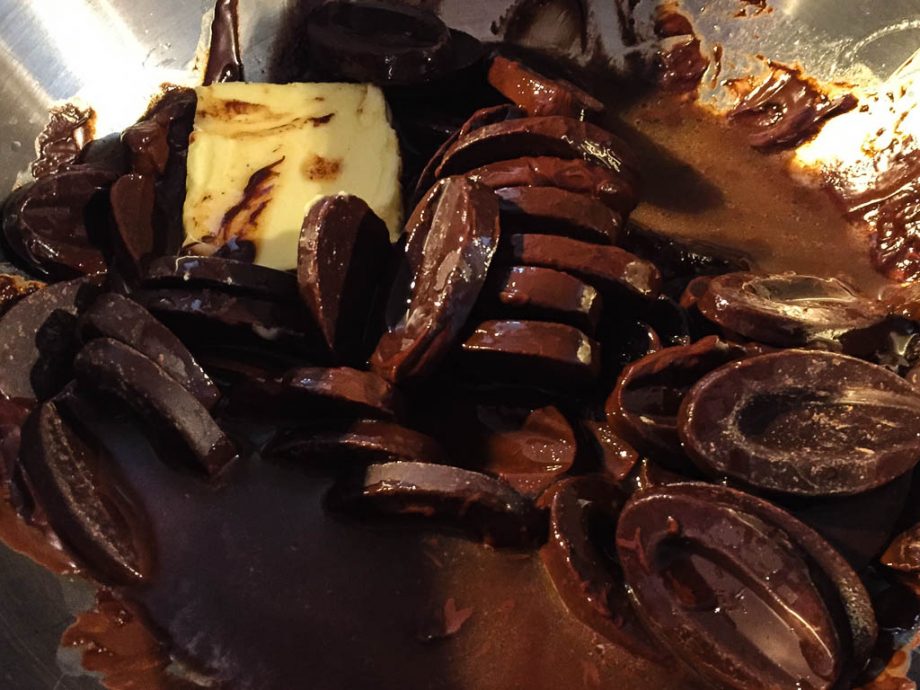 Then, I take it off the heat and beat in some egg yolks. 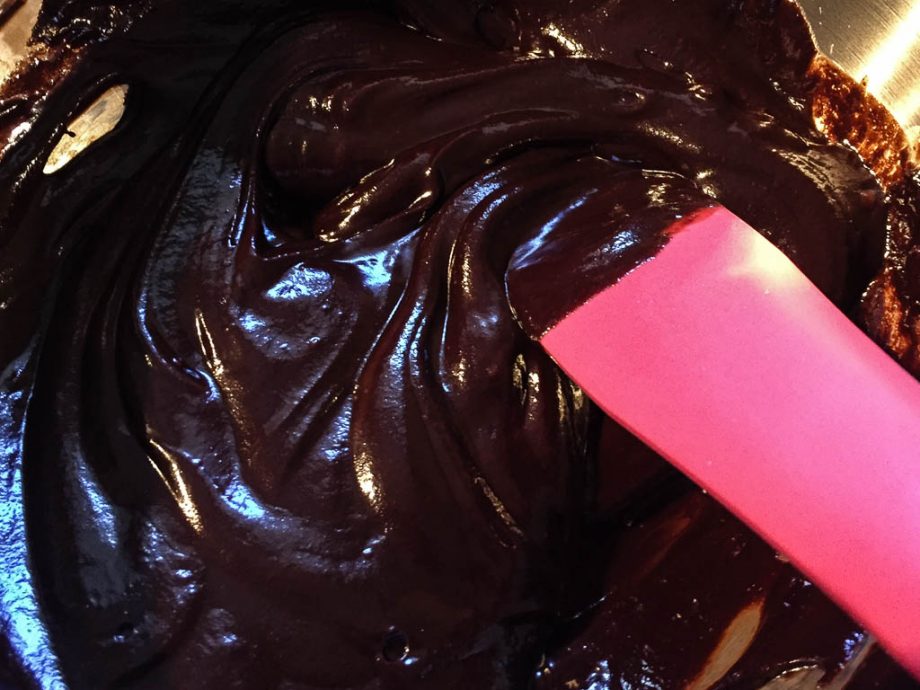 Next, whisk up some egg whites. 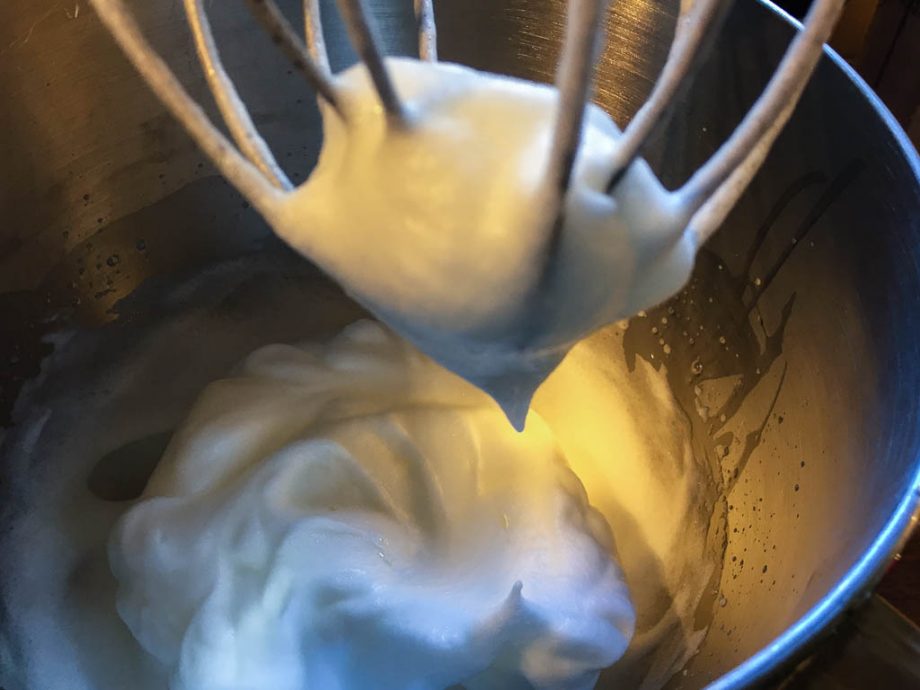 Stir them into the chocolate mixture. 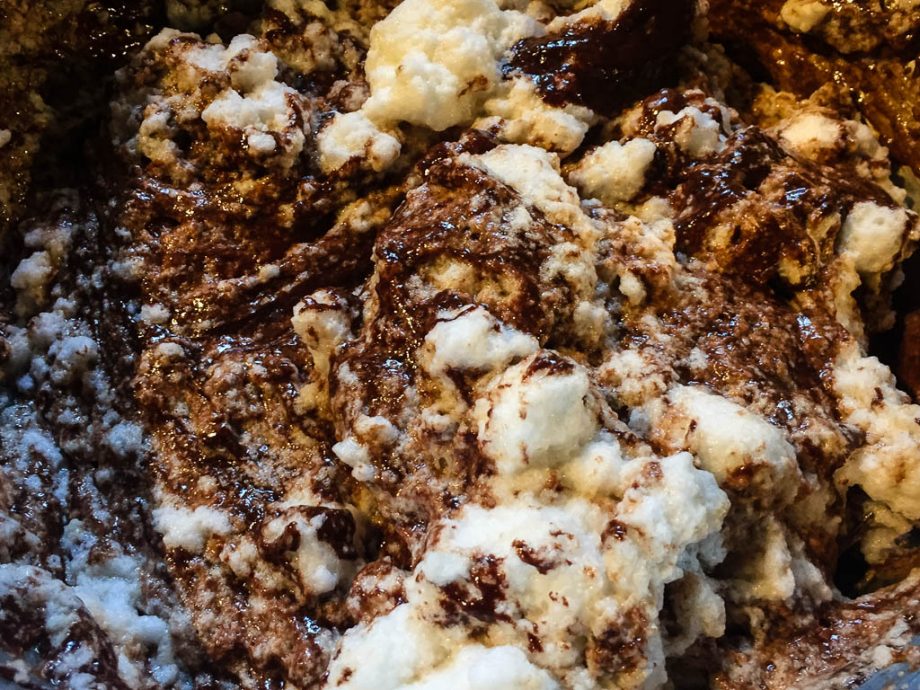 And stir gently until well mixed. 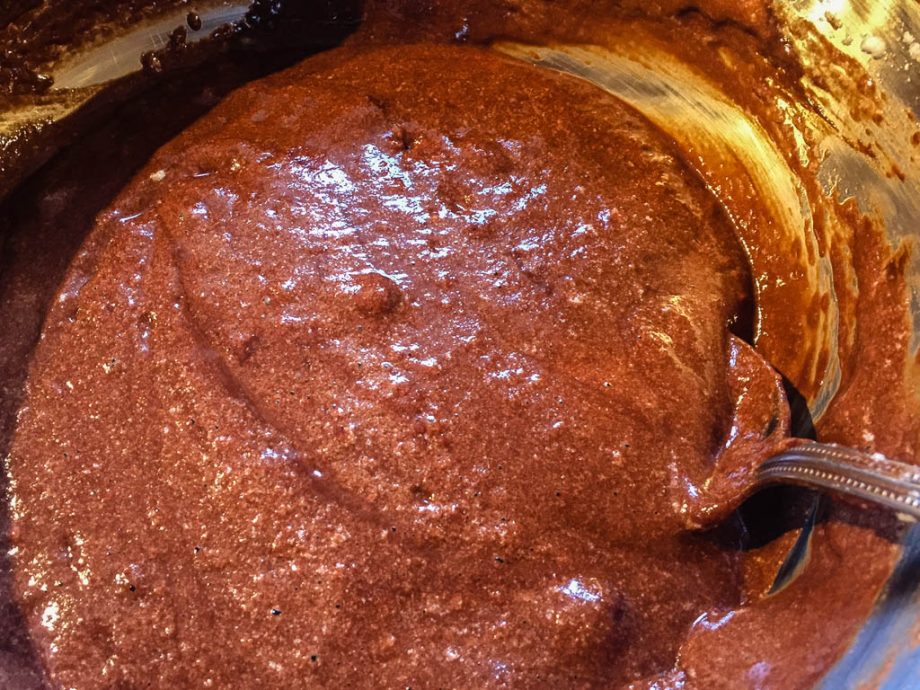 I pour the mixture into some ramekins and put in the fridge until set. 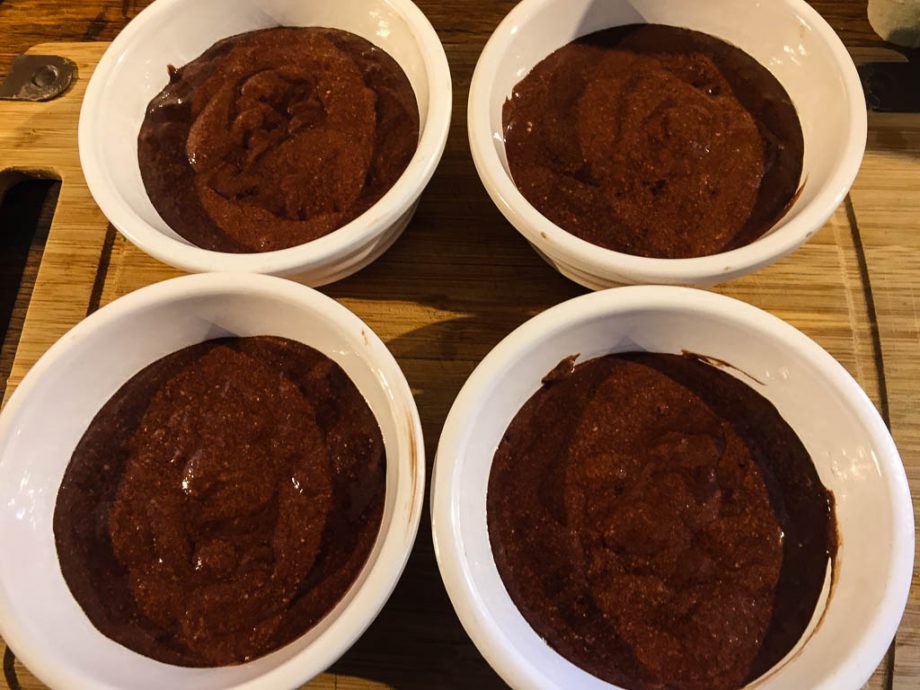 It made a very nice chocolate mousse. The orange of the Grand Marnier worked well – that made for a good coffee substitute, I felt. The mousse was incredibly rich, however. There was no way I could eat even half of one of these in one sitting though, and I eventually gave up and put mine back in the fridge. Sue, however, had no trouble with hers, nor with mine when she polished the rest of it off the following day. 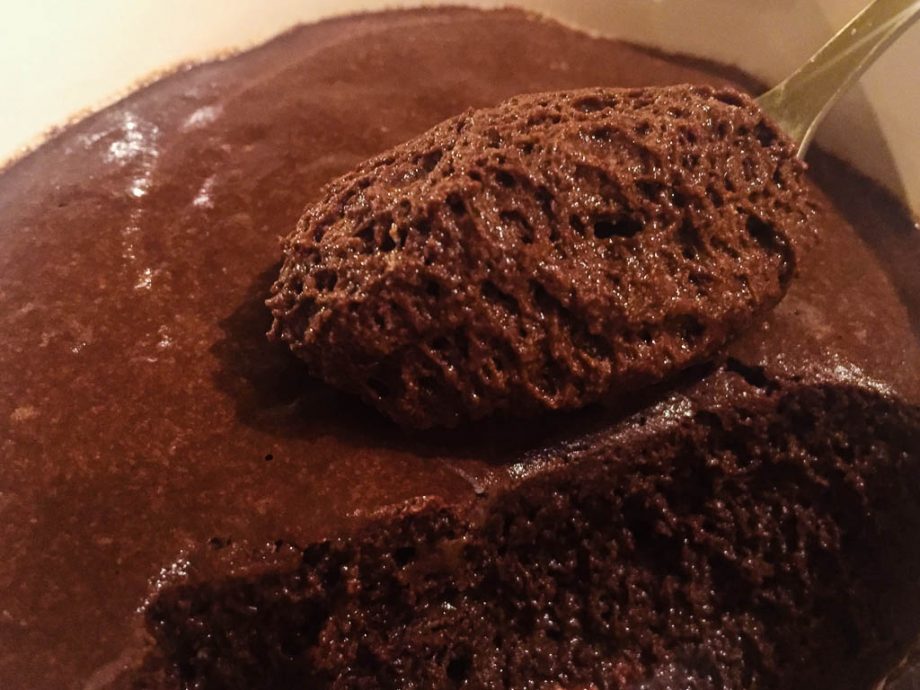 As soon as I finished writing up this post, I nagged Sue for her tasting notes that accompany each post here. She immediately bemoaned the fact that all the mousse had now gone. Where had it all gone? Well, she ate it all. So, I said I’d make up a new batch, just for her. This time, I figured that as I probably wasn’t going to eat any, I may as well make it the way the recipe calls for, using coffee as the liquid ingredient.

I have to admit, when I tasted it, the coffee wasn’t a very pronounced flavour; it was much gentler than I had expected. I’m afraid I still can’t say I’m a fan though – I only had a small teaspoon of the mousse and that was more than enough for me.

Deep, dark and rich. Chocolate mousse is a favourite of mine. Along with chocolate ice-cream.

This recipe contains very few ingredients, but one of them is a shot of rich coffee and Dave hates coffee and chocolate together so he refused to add it. Instead, he used a slug of Grand Marnier to make up the liquid content. The recipe already has rum in it, so this was a tasty cocktail. It was potent.

It tasted delicious, but the texture was a little grainy. Dave thinks that might be because he had not got the technique for dissolving the chocolate quite right. However, if a spoonful was held for a moment on the tongue the granular texture just melted away.

It was a very nice dessert. I was a happy woman for several days as Dave still didn’t really like it so ate precisely a scant half of one of the four portions 🙂

Then, one day, after talking about writing the notes up, he said he would be happy to make it again for me as I had liked it so much. And I suggested that this time he use the coffee because I would like it and he just wasn’t into it as a dessert anyway. He agreed. Win! Four more portions of dark chocolate mousse coming my way.

The book suggests that the dessert is served with a measure of Grand Marnier poured over the top and so I did that this time. A scant measure as it was just Sunday afternoon and I didn’t want to doze off.

This time I think the mousse texture was perfect from the chocolate point of view, not at all granular, but if anything the mixture was a little stiff. Certainly stiffer than last time and less melting. The flavour is more balanced by the coffee addition. I suppose it was the foil to the sweetness of the Grand Marnier topper.

All in all they were different. Each had a little issue, both tasted very nice and yet quite different somehow.

I think it is a lovely thing and would be beautiful with a few fresh raspberries on the side.

One Response to Chocolate Mousse