When it is good, calamari is a fabulous thing – crisp exterior, meltingly tender inside. When done badly, it’s like chewing on a mouthful of pencil erasers. On holiday recently, we had a fair amount of really good squid, and so I was determined to make some at home.

For a little while now, I’ve been getting some really nice fruit and vegetables from Natoora’s range on Ocado. I recently realised that Natoora also have their own web site where you can buy a much wider range of produce, and this includes fresh fish. So, I ordered some of their Fresh Small Squid. 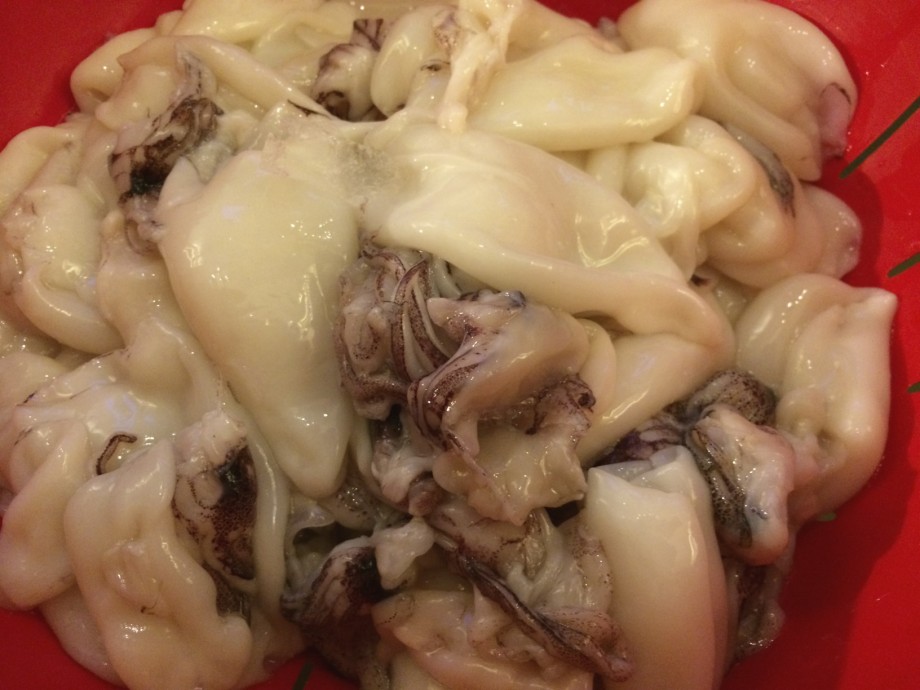 First, the batter. The Prawn Cocktail Years recipe uses a mix of plain flour and potato flour, together with beer, oil and egg. I mixed it all with a blender, and then, as the recipe instructed, passed it though a sieve. Why on earth do we have to sieve everything in this book? Eggs, asparagus, batter, it all gets pushed through a sieve. Well, I did as I was told, but all I got out of it was a sieve that now needed washing. To be fair, there were a couple of small lumps of flour that got filtered out, but nothing that I could really get worked up about. Anyway, the sieved batter was then left to rest whilst I got on with cutting up the squid.

I bought the small squid, as smaller is usually more tender, but these were really quite small, and cutting them up into rings took forever. The resulting rings were tiny – they’d probably just about fit on your finger. This calamari certainly wasn’t going to look like the photo in the book – their calamari featured a pile of long, tangled pieces of battered squid, entwined with large rings. Oh well. 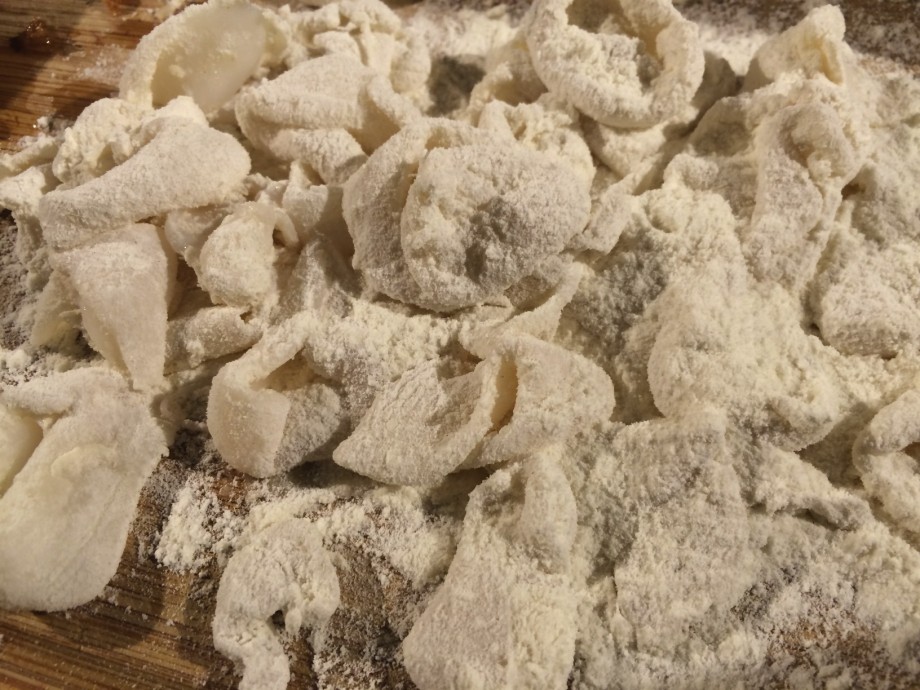 Finally, all the squid was sliced and we were ready to fry. The rings are dipped in flour, then the batter and then fried for 2 – 3 minutes. The recipe said to fry five or six pieces at a time – well, they clearly had larger pieces of squid than I did – it would take hours if I did that! I fried them in batches, and as each batch was done I put them on a tray in a warm oven whilst I cooked the rest. They seemed to be cooking nicely – the only problem was the size of the rings. Once battered, they stopped being rings and just folded up into little battered balls of squid. Squid McNuggets. 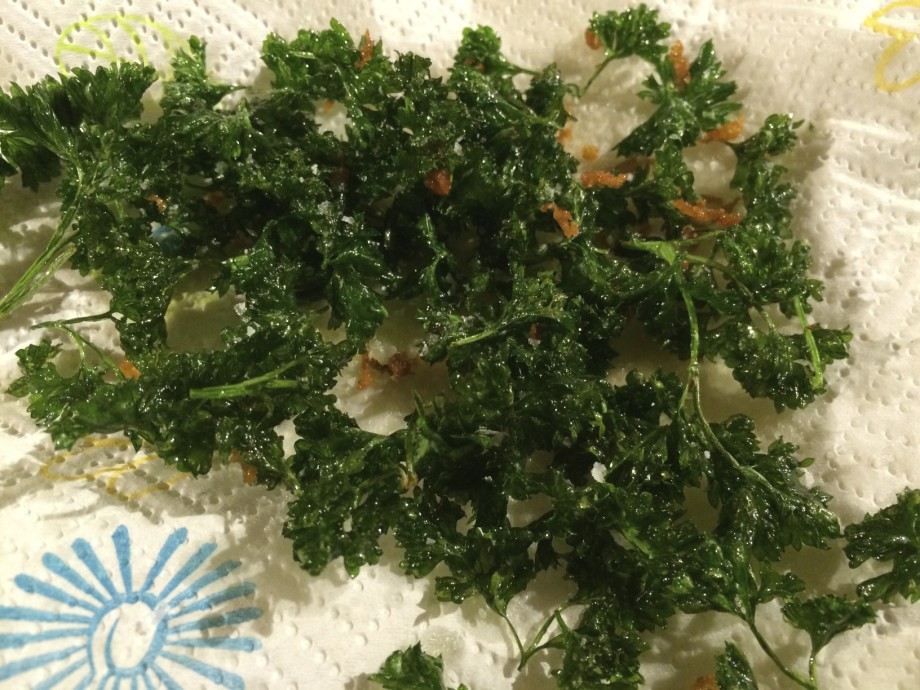 Finally, the garnish. Some sprigs of curly parsley, fried in the oil for a couple of seconds. “Be careful of the sputtering”, the recipe warned. Well, they weren’t kidding – boy, did that parsley sputter – it practically exploded in the pan! It died down after a couple of seconds and I fished it out.

To serve, I put the calamari onto plates, dusted it with cayenne, added a couple of wedges of lemon and sprinkled with the fried parsley. I served some aioli on the side. 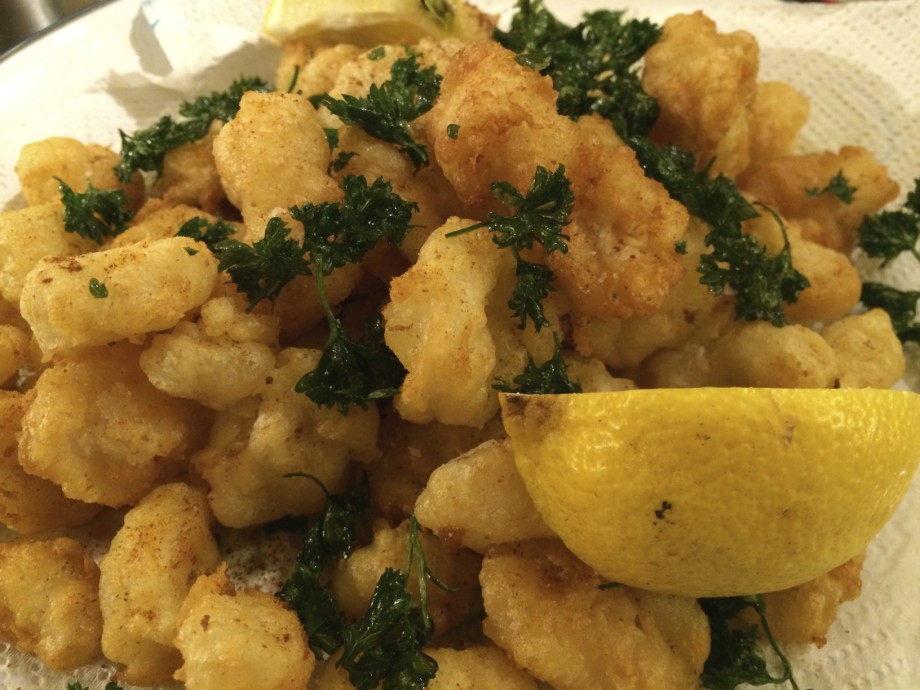 Well, it may have been the wrong shape, but it was delicious. The squid wasn’t at all chewy, it was delightfully tender. The batter was crisp and tasty. The parsley made a surprisingly good accompaniment. All in all, I think this recipe was a success. Next time, I would try to get some larger squid, so I could have proper rings, or perhaps cook the small squid whole, rather like the Canarian chopitos.

A first for our domestic kitchen!

The squid was beautifully tender. Tiny little things, soft as butter, or perhaps rather a cross between butter and cheese. It really was melt in the mouth.

The problem with this dish is that because the squids were so small, the rings were miniature and this meant that rather than having a battered ring, the batter clumped most of the time and so we had squid balls! Nothing wrong with that approach except that the ratio of batter to squid was out of proportion and made the dish a little heavy. Mind you, that didn’t stop us from eating rather a lot of it with lemon and aioli. The batter had a nice tastiness to it although I’m hard pressed to say what spices were used. Definitely something to give it a boost.

All in all a successful rendition of the taste and texture but not quite the look of the picture this time. It’s all in the size of the squid apparently.