Despite the fact that it’s June, the weather has been more reminiscent of November recently. Endless greyness, constant drizzle, periodic full-on downpours. I was in the mood for something warming and hearty to eat. Carbonnade of beef sounded a good option. It’s been a good while since I made a carbonnade, but I always enjoyed the way the mustardy slices of baguette on the top soaked up the rich beef juices. I think this tasty stew is exactly what we need to help cut through the gloom that is a bad English summer. 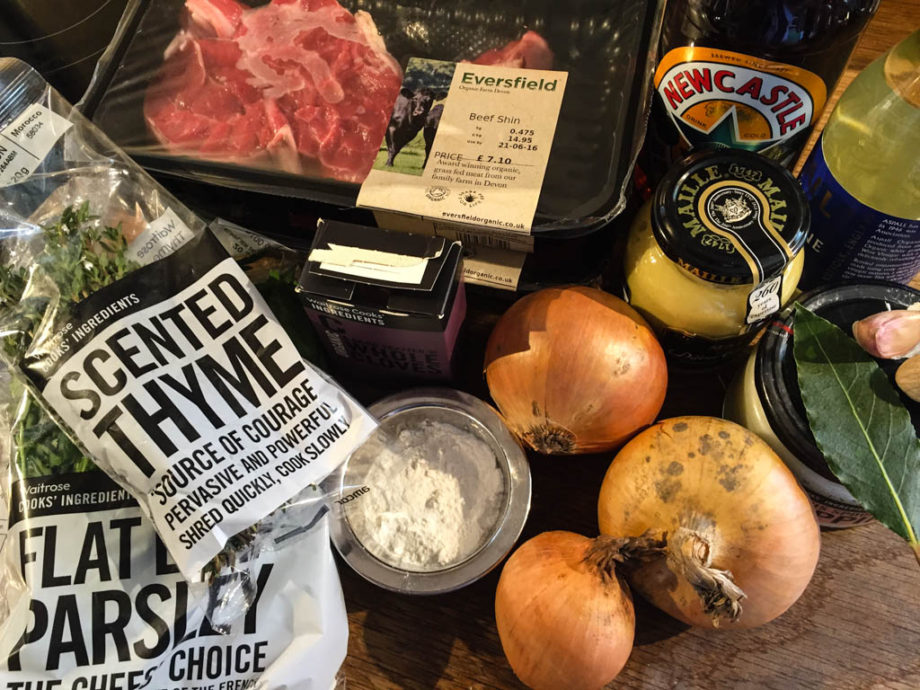 It’s pretty easy to make. I brown some pieces of beef shin in a pan, together with some onions. 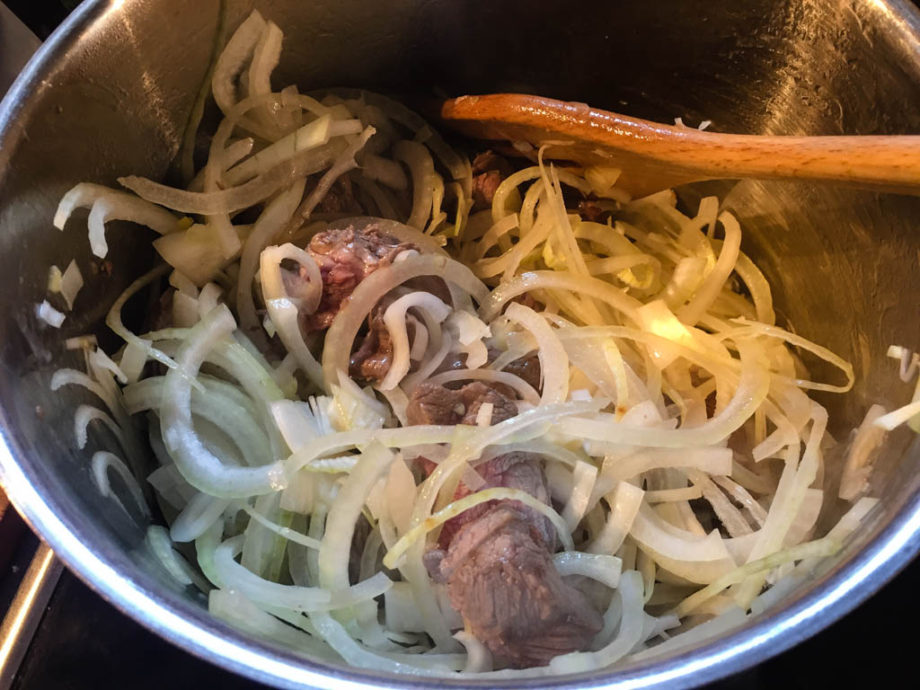 I sift in a little flour and add some garlic.

Finally, I add some brown ale and water, together with some fresh herbs and salt, pepper, nutmeg, sugar and vinegar. I then put it in a casserole and cook, covered, in the oven for a couple of hours. 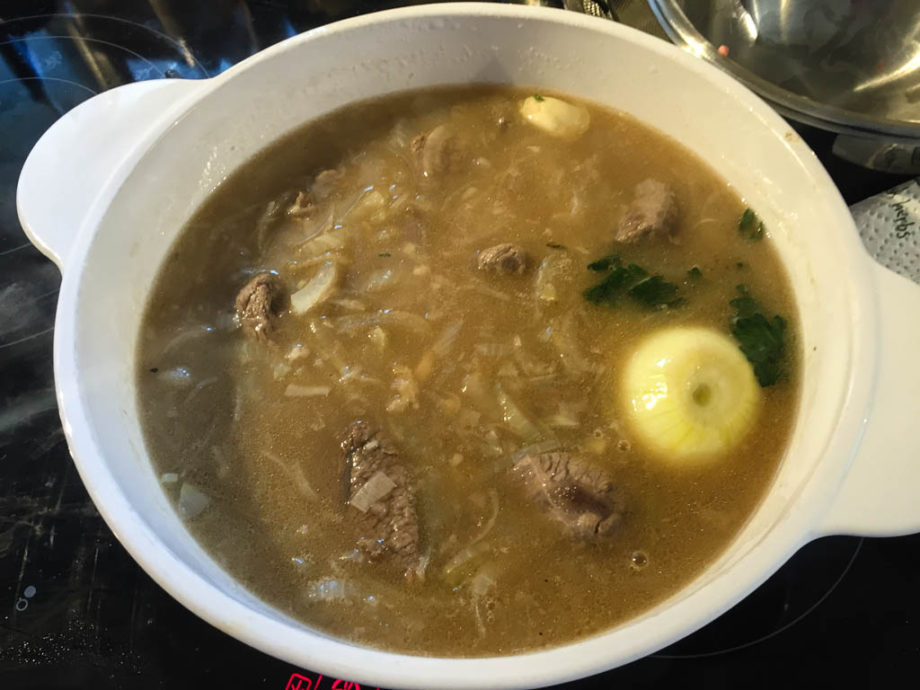 I then slice of a baguette. At this point, I’m supposed to drizzle some of the fat from the top of casserole over the baguette slices, but there doesn’t seem to be much fat floating at all. I guess the shin wasn’t actually very fatty. Oh well, I skip that and spread a generous dollop of Dijon mustard over each slice. I arrange the slices over the top of the casserole, and push each one down to thoroughly dunk it in the juices. 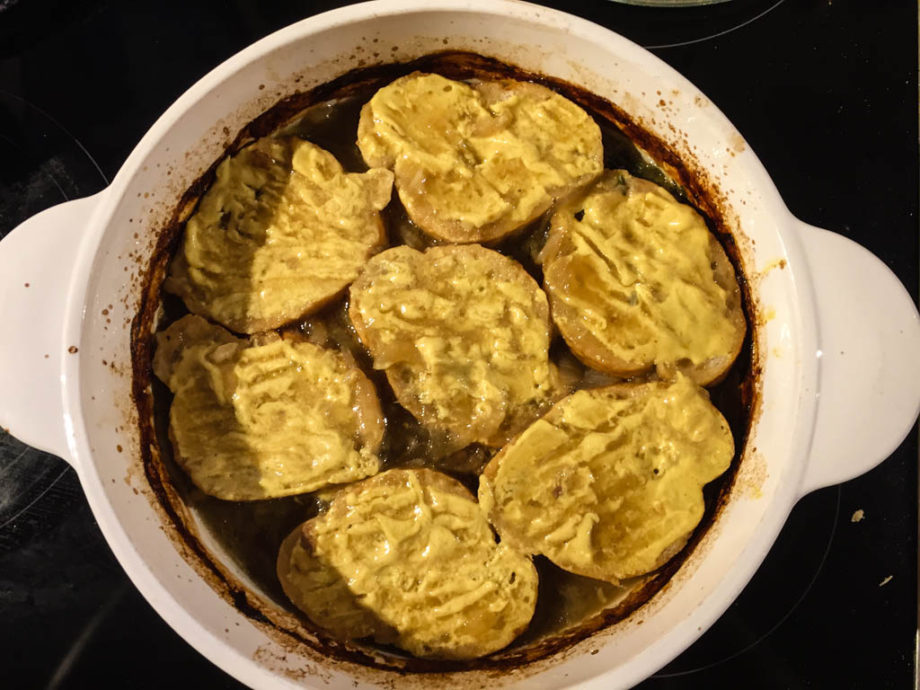 The carbonnade goes back into the oven to crisp up the bread. After twenty minutes, the bread still isn’t especially crisp, so I put the grill on too to speed things up. That works and after another five minutes or so, we’re ready. 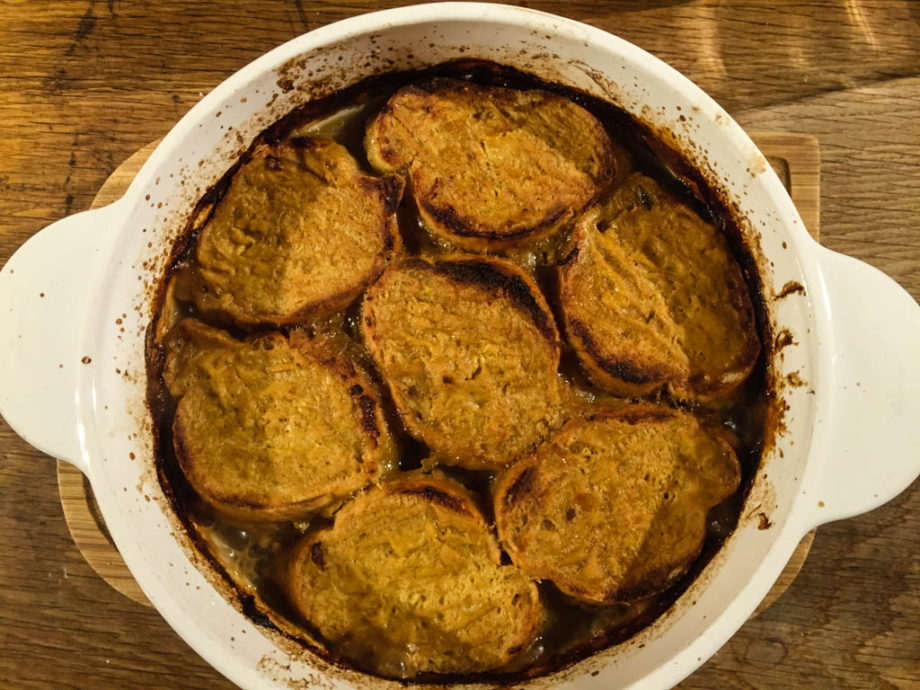 I’m sorry to say, it was disappointing. Pleasant enough, but lacking in substance somewhat. The mustardy juice-soaked bread was nice, the beef was tender, but there was something lacking. I realised as I ate that I’d forgotten to check the seasoning at the end, and the whole thing could have done with a little more salt, but it was something more fundamental than that. I’ve had – indeed, I’ve made – much better carbonnades than this one. An OK dinner, but not one of the more memorable ones.

I’m beginning to think that The Prawn Cocktail Years needed Dave on the recipe testing stage because some of them are just lacking in something.  And sadly this was one of them.  It was lacking in Oomph.  I actually really like this dish, so I have had better experiences of it.

It wasn’t bad.  The beef was beautifully tender and the mustard bread baked on top is always lovely, like a crisp yet soft dumpling.  But the sauce inside was missing a crucial part of the flavour profile.  I describe it as nice when first supped into the mouth.  Then after swallowing the flavour on the tongue quickly became a little flat and bitter.  There was no staying power there.  It lacked body (and soul).  It lacked the sort of flavour a stew often has in abundance, the rich, pungent sauce that tempts and tickles the sinuses with the delicious aroma.

So, this was rather mundane and disappointing.  It also lacked seasoning, but I think that was the chef’s fault.  he forgot to check the seasoning before he put the bread on top for the final part of the cooking.

I’d happily eat this dish again.  But a different recipe please.  One with more Oomph.