By dopiaza on 8th January, 2017 in The Sixties Bistro

It was a Saturday afternoon. The doorbell rang, and on opening the door, we were greeted by our neighbour’s young son proudly proffering a bag containing what turned out to be two very large rainbow trout. He had been fishing that morning and was now sharing some of his catch.

It was, of course, immediately clear what I should do with them: Trout with Almonds. Sue was dispatched to Waitrose to buy some almonds, lemons and parsley. I was left to contemplate the fish. 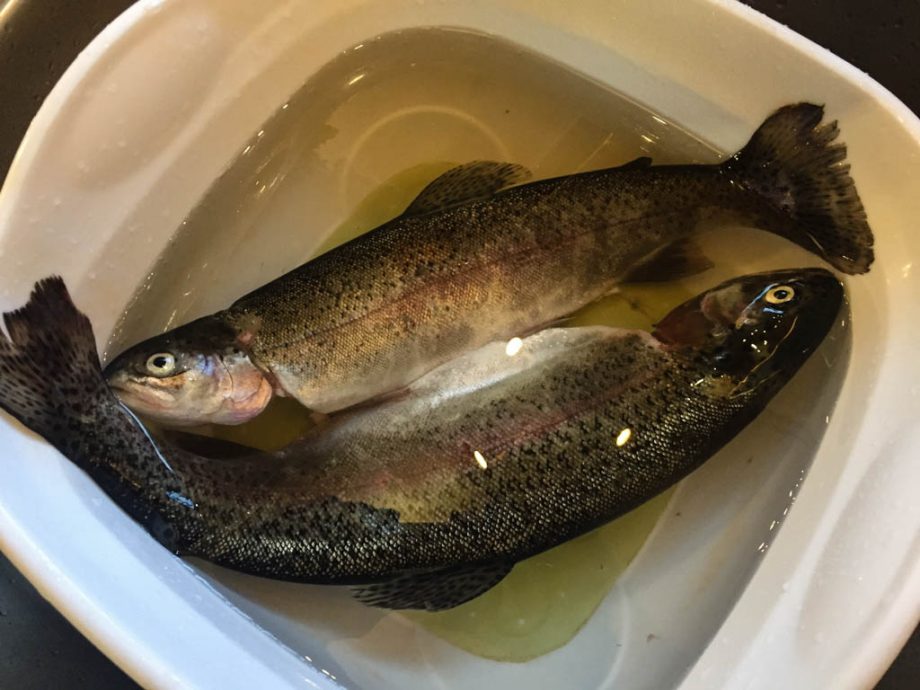 These were an enormous pair of trout. The recipe calls for two trout, about 300g each. Each one of these was easily twice that weight, and some more. Still, they were about as fresh a fish as we were likely to ever get, and the perfect opportunity to tackle this recipe, so I was looking forward to these.

The recipe is incredibly simple. The fish are seasoned with salt and pepper, dredged in flour, and then fried in butter. 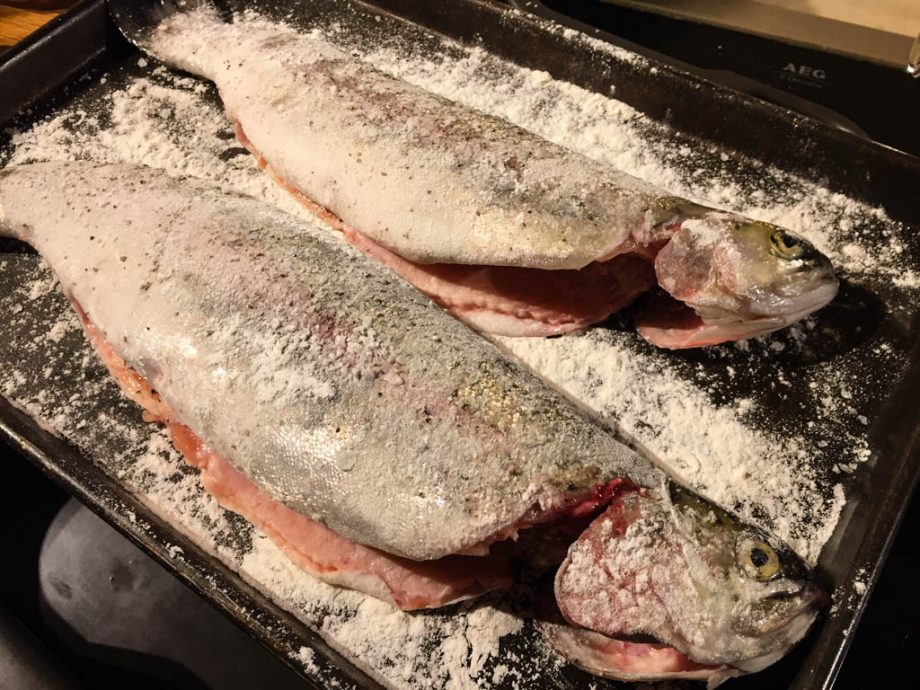 Now, that all seems to be pretty straightforward, but as it turned out, there were two complications.

Whilst the fish is cooking, the recipe has you blanch some whole almonds, drain them, and then slice them lengthways. Luckily, I had the foresight to do this in advance, long before the fish hit the pan. It turns out that slicing almonds by hand is incredibly tedious, surprisingly difficult and takes forever. I managed to cut most of the almonds into three slivers, but some of the smaller ones – especially towards the end – ended up as just two halves. There’s one thing in life that I am now very sure of, and that’s that I will never sliver my own almonds ever again. 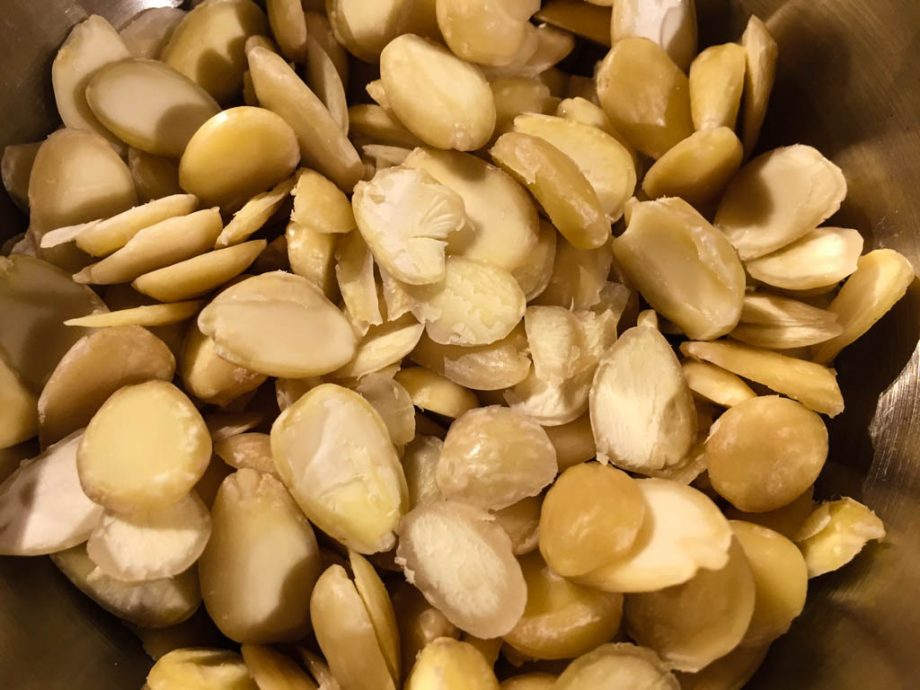 The second complication was a little trickier. The recipe instructs you to “take a frying pan large enough to hold the fish comfortably.” Did I mention that these were very large fish? I took the largest frying pan I possess and put one of the trout in to gauge the size – the head and tail each stuck out of the side of the pan by a good few inches. Somehow, I don’t think that’s what they meant when they said “hold the fish comfortably”. I rummage through the cupboards looking for inspiration. In the end, the only thing I can find that will hold these two fish is a large roasting tin. So, I put the tin – more accustomed to holding large joints of meat than a couple of trout – on the hob and melt some butter in it. Given the tin size, I figure that it’s prudent to increase the amount of butter somewhat. As the butter froths and browns, I add the fish and leave them to cook slowly. They do, of course, take a little longer than the recipe’s suggested 6 – 8 minutes. 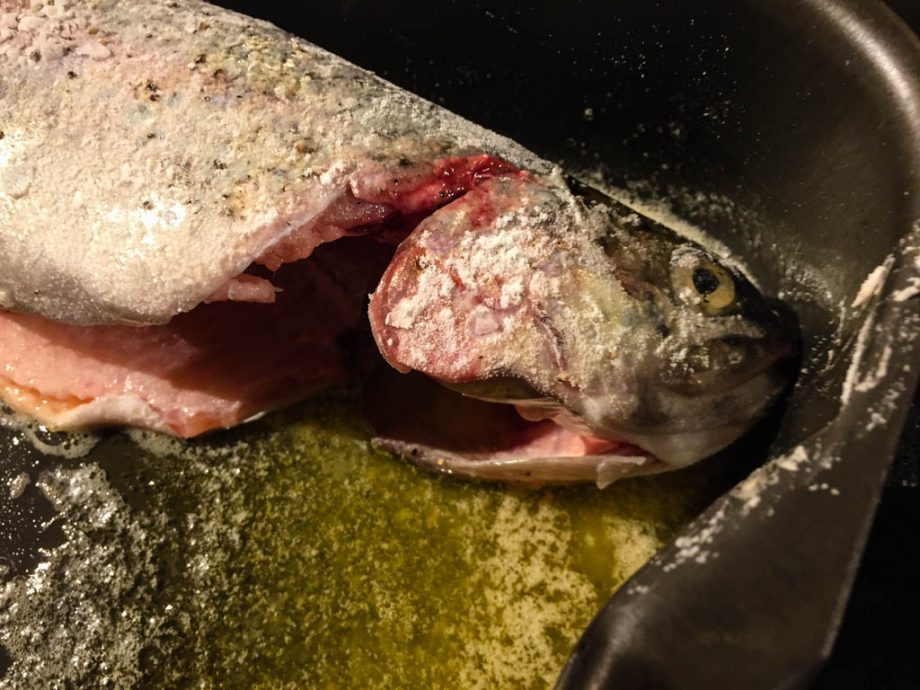 Once the fish is done, I remove it from the pan, and toast the almonds in the butter. After a few minutes, once the nuts are browned, I add some parsley and lemon juice and then spoon the nuts and butter over the fish. 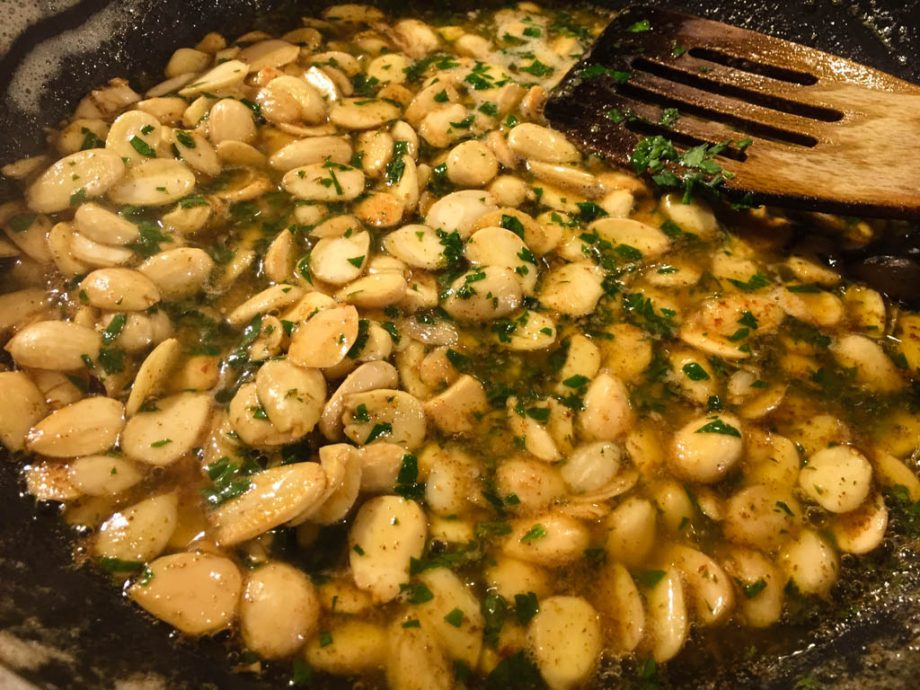 Trout isn’t a fish I would normally choose – it can often have a slightly muddy flavour that I find unpleasant, but there was none of that here. This fish had a lovely delicate flavour, and the buttery lemon and nuts accompanied that perfectly. Very nice. The fish, though, was enormous, and so of course I failed to eat it all – Sue polished off the leftovers the next day. 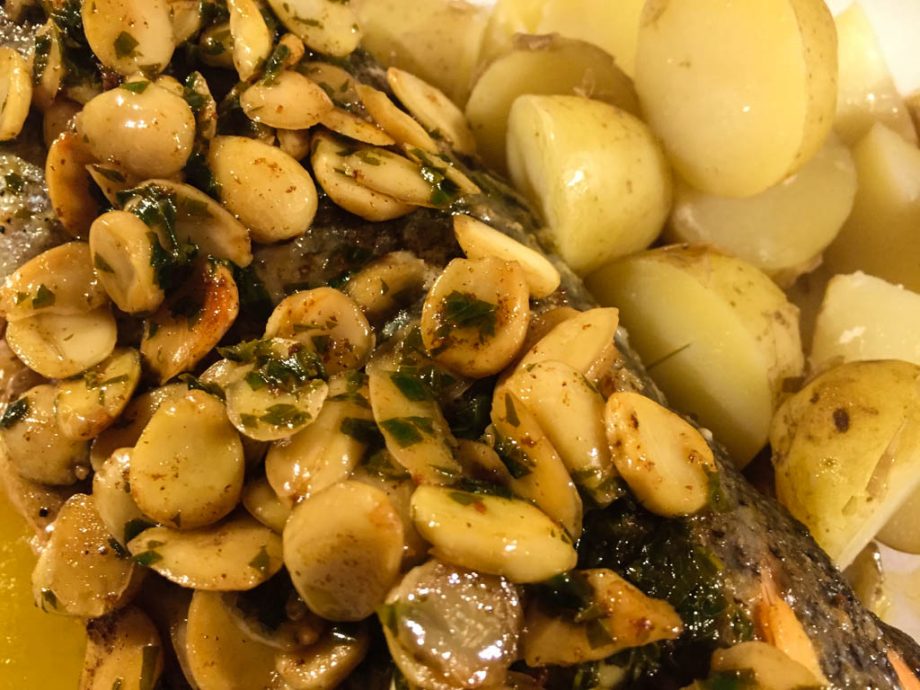 Once upon a time I thought of this dish as "posh restaurant food". At that time I think the only restaurants I'd eaten in (all be it very infrequently, perhaps once a year at Christmas as a "staff outing" from my Saturday job) were hotel dining rooms.  My upbringing was not a culinary adventure.

But I do like trout, as long as it doesn't taste too earthy.  And I had fond memories of this dish.

It started well.  Extremely fresh trout delivered to the door by the 4 year old fisherman himself (although he had a touch of the suddenly shy when handing them over in total silence). They were beautiful fish, iridescent and gleaming. They were also huge, especially one of them.

I understand it was a proper faff to prepare. Peeling and hand slicing what looked like hundreds of almonds.  But the fish came to the plate looking rather beautiful in its new coat of nut scales, gleaming with the butter the almonds had no doubt been fried in.

As for the taste?  Lovely.  The best trout I've had.  Soft, buttery, and fresh as a daisy.  This fish did not taste earthy at all.  I really enjoyed it.  Twice in fact, because my fish was so big I had two meals off it.

Would I eat again?  Yes please.

One Response to Trout with Almonds