Shepherd’s Pie is is one of those things I often throw together after having a leg or shoulder of lamb. It’s a good way to use up the remains of a roast, and is invariably tasty. I was interested to see how The Prawn Cocktail Years’ version turned out.

Sue’s been out at the theatre again this week, but Wednesday was a night off. I figured this would make a good dinner for then. The evening before, I’m home alone again, so I make the base of the pie – looking at the recipe, it seems I can easily make that one night and then add the topping the next day. 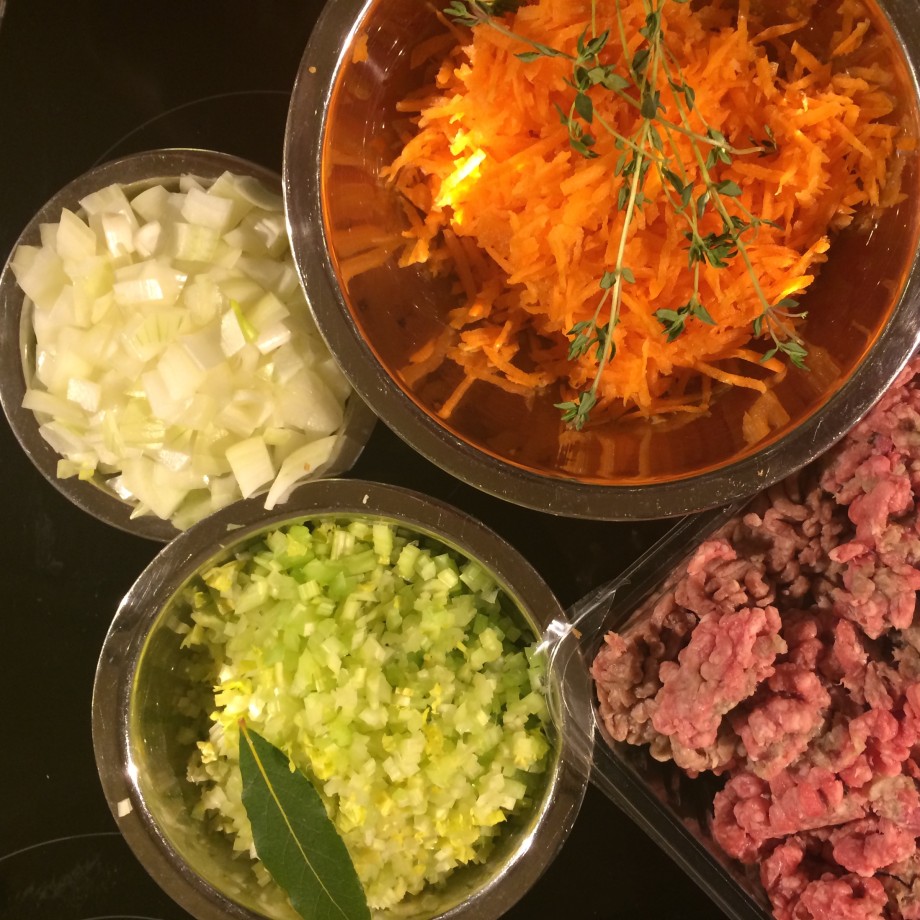 The recipe starts off very much like the bolognese from the weekend. Onions, carrots and celery are all sautéed, together with some herbs and seasoning, but this time in dripping instead of butter. I think the carrots are an odd choice, and they’re grated, not chopped, but hey, they worked well in the bolognese, I’ll go with it. The thing I think is most odd though – there is no garlic. Garlic and lamb always go together so well, I can’t imagine not adding it here. But, it’s not in the recipe, so no garlic it is. 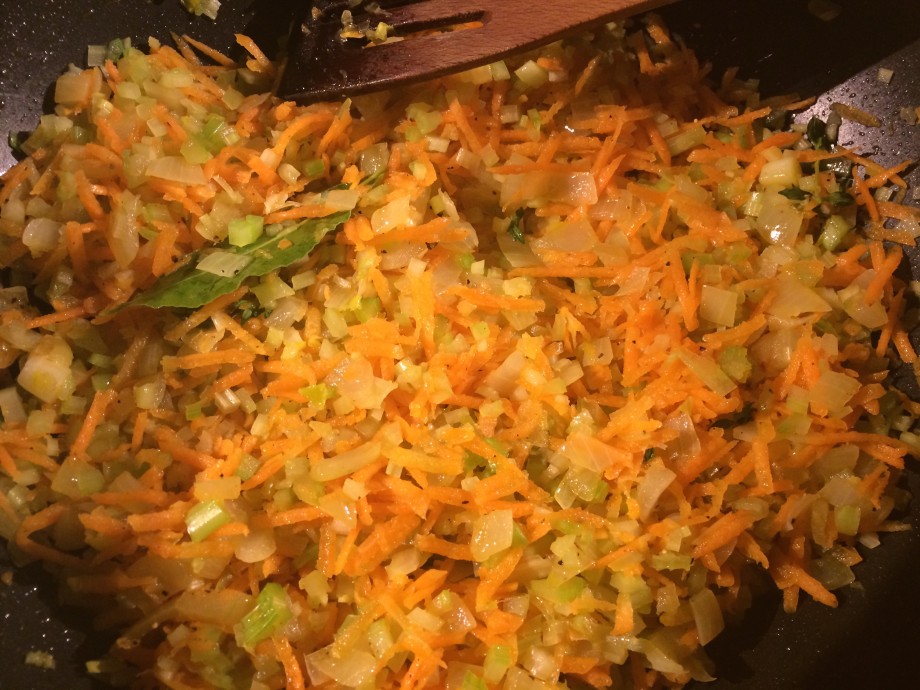 Once the vegetables are soft, I empty them out onto a plate, and fry minced lamb until it’s thoroughly browned, then a little flour, and finally I’m told to add tomato ketchup and anchovy essence. Tomato ketchup? Seriously? So, a couple of tablespoons of Heinz ketchup went in. And what on earth is anchovy essence? I went shopping earlier in the week and couldn’t find anybody who would sell me anchovy essence, not even for ready money. I google it, and it seems to be basically made up of anchovies, salt and “spices”. So, I need to improvise. I chop a couple of tinned anchovy fillets and add a splash of Worcestershire sauce. I guess that will have to do. 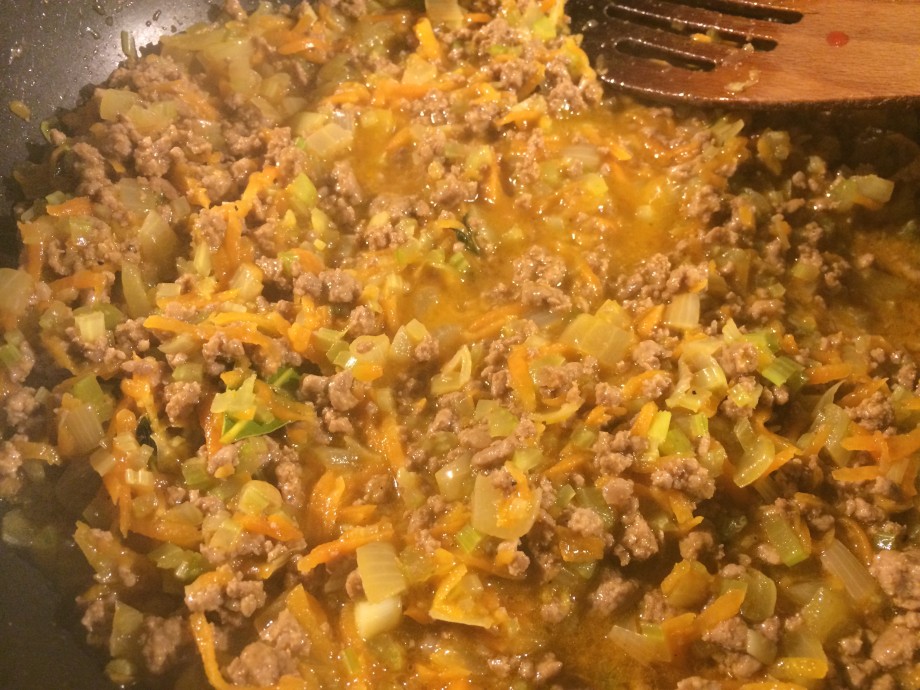 Cooking the Shepherd’s Pie Base

Cook for a few minutes, return the vegetables to the pan, add some water and simmer for the best part of an hour. And that’s the base. I taste it: it seems a bit bland. Hmm, perhaps this will be the first disappointing meal from the book. I leave it to cool and put it in the fridge overnight.

Wednesday night: The base is all made, I just need to add a mashed potato topping and then bake it in the oven. The recipe calls for 1.5kg of potatoes. I weigh them out: that’s an enormous pile of potatoes! OK, whatever the book says must be right. I peel them, and put them on to boil. Whilst they cook, I take the cooked mince and spread it out into a shallow dish, as the recipe says. I normally cook my shepherd’s pie in a deeper casserole dish, so it has a smaller surface area. In the shallower dish, it’s spread out more, so I guess that’s why I need so much potato. 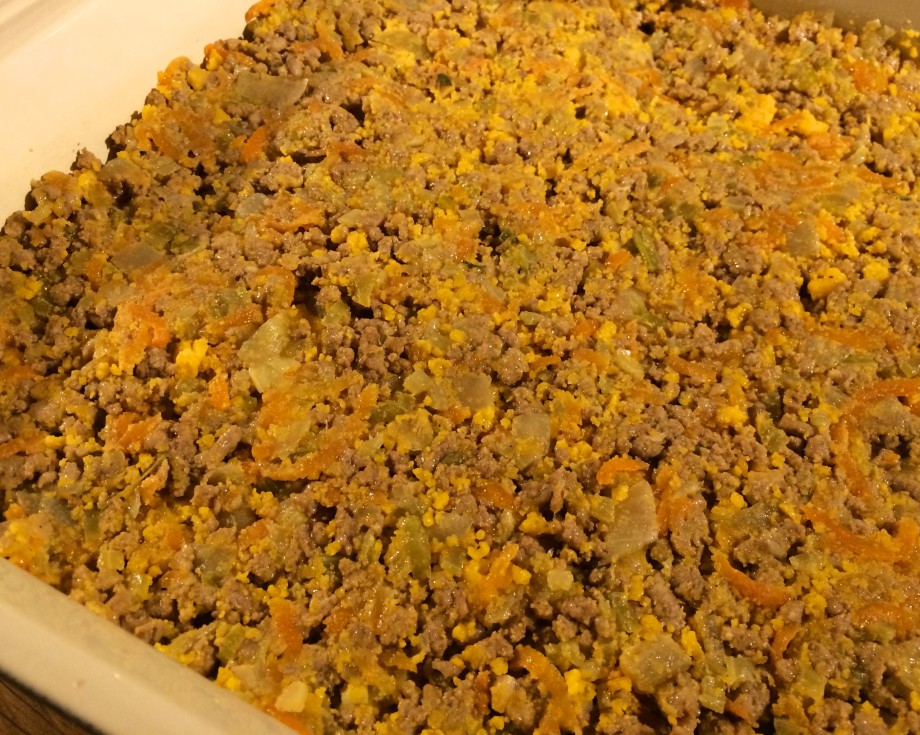 I mash the potato, add a remarkably large amount of butter to it, together with an equally remarkably small amount of milk, and mix well. Add a little black pepper and nutmeg, and then spoon it over the mince. I fluff it up a bit with a fork, dot with yet more butter, and bake in the oven. The recipe said thirty minutes, but I felt it needed an extra ten to crisp the top properly. 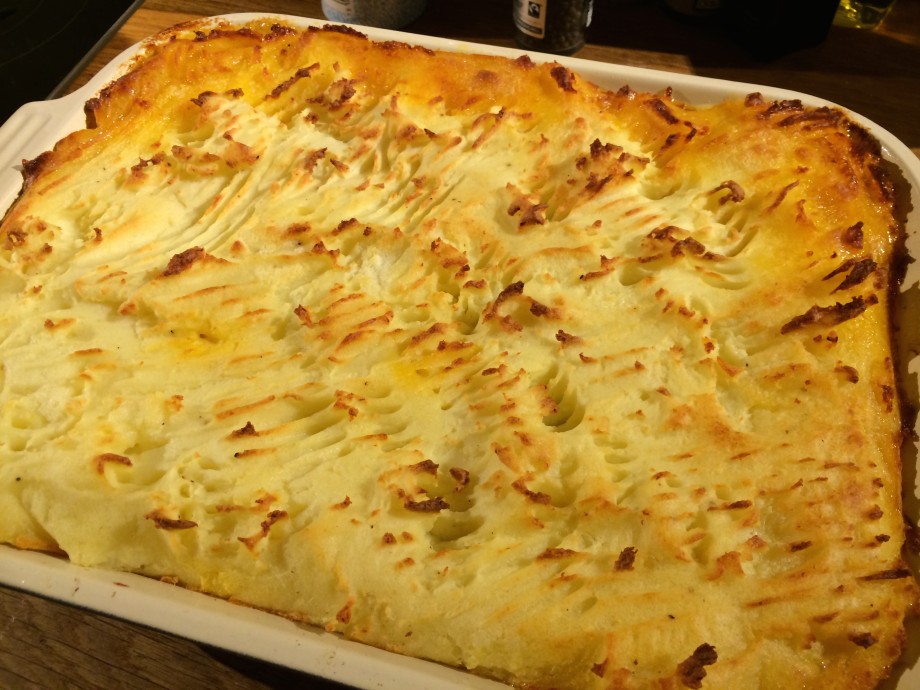 We received a glut of purple sprouting broccoli in last week’s Riverford box, so I served it with that.

The verdict: well, I really enjoyed it. The lamb had a subtle, juicy flavour that went well with the creaminess of the potato. It was nothing like the shepherd’s pie that I would have made if left to my own devices, but it was certainly as good, and probably better than my usual attempts. Definitely something I’ll make again.

Definitely a winter winner. It has all the hallmarks of winter comfort food. Seemingly acres of buttery mashed potato cooked to golden brown on top. Probably not a good spring/summer dish so I’m glad we got that one out of the way before it gets too warm.

The lamb and veg mixture was subtle rather than overtly seasoned. It was very smooth tasting, with a lovely hint of nutmeg – my favourite spice. I would definitely have this again, preferably when it’s cold and the fire is lit.

7/10 – it loses marks simply because it’s rather more mundane than the other recipes we’ve sampled to date. Great family supper. Less of a “friends round for dinner” sort of thing.