By dopiaza on 30th March, 2014 in The Continental Restaurant

I think I’ve only been to IKEA once in my life. My overriding memory of the visit is that on leaving the store, we spent a few minutes in the car park watching a couple trying to push a very large sofa into the back of a very small car. It didn’t seem to be going very well; I suspect they’d have had much more success inserting the car into the sofa rather than the other way around. We left them to it, and headed home with our selection of flat-packed goodies. While we were there, I did check out the food that was on offer – I recall I had a hot dog. I didn’t try the meatballs, although now I wish I had.

I don’t like making meatballs. No matter what I do, it’s always hit or miss as to whether they hold together or not. Many’s the time I’ve set out to make meatballs for dinner and ended up serving fried mincemeat instead. My general lack of meatball success is undoubtedly the main reason why I’ve never tried making this recipe before. Well, it was time to give it a whirl.

After last weekend’s three-course extravaganza, I had been looking for something a little more straightforward. The whole meatball thing looked pretty easy – shouldn’t take too long, I thought. Then, once I’d settled on the idea of meatballs, I realised that one of the ingredients was chicken stock, the recipe for which was listed elsewhere. OK, so first I make the stock.

My standard method for chicken stock, is to take a chicken carcass, or whatever leftover bits of chicken I have, and add them to a pan with an onion, a carrot and a stick of celery, cover with water and simmer for an hour or so. The Prawn Cocktail Years’ version is a little fancier than that. 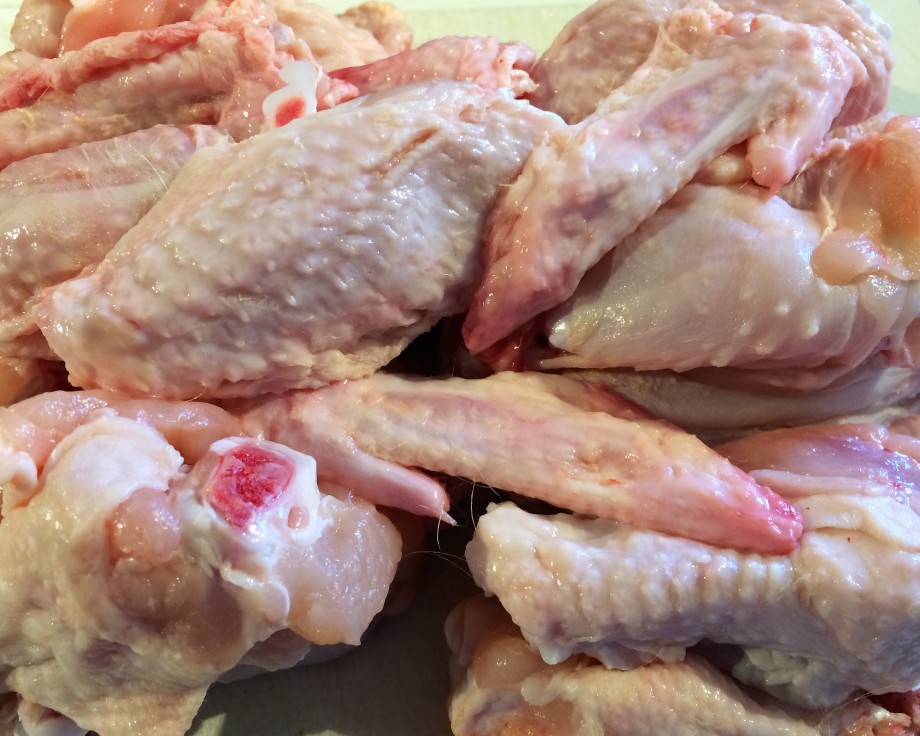 It starts with a pile of chicken wings, chopped into pieces. Then, leeks, carrots and onions are chopped and added. And tomatoes. I never add tomatoes to my stock, but OK, I’ll try that. But this recipe doesn’t just call for me to chop the tomatoes and add them, it wants me to peel them first! I hate peeling tomatoes, it’s a fiddly, faffly job. Oh well. I cut a cross in the base of each tomato, put them in a jug, and then poured boiling water over them. After about thirty seconds, I take them out and burn myself trying to remove a very recalcitrant skin. Eventually, I have sore fingers and four naked tomatoes. I chop the tomatoes and add them to the pot. 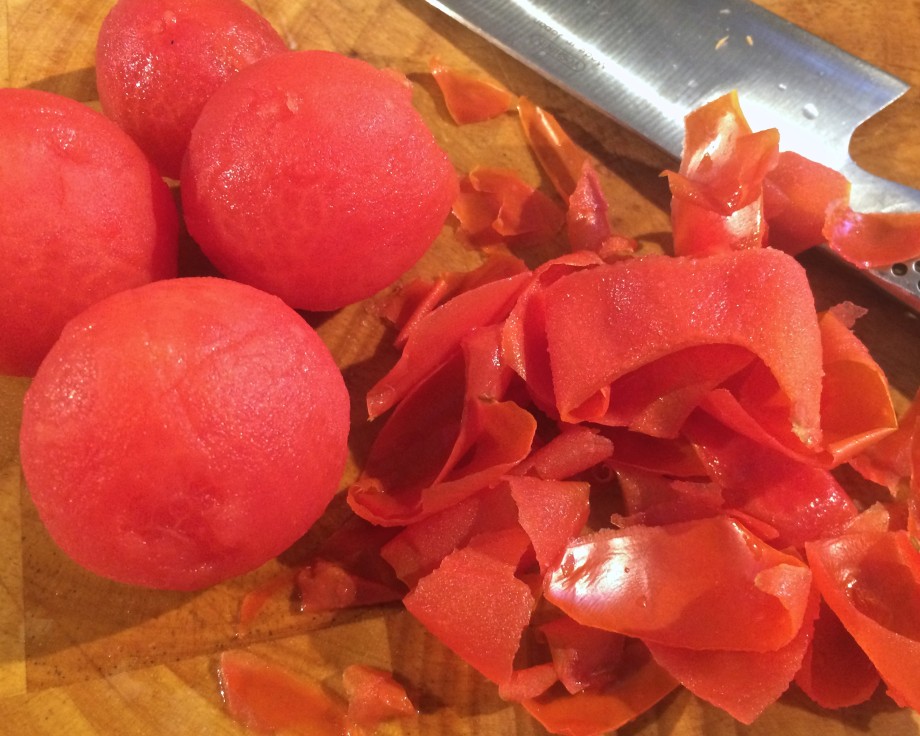 Next, the seasonings. Bay leaves, thyme, parsley, peppercorns. And what? A Knorr chicken stock cube? Did I read that right? Why on earth am I going to these elaborate lengths to make a fabulous chicken stock, if at the end of the day they just want me to bung in a stock cube? Forget that. I skipped the stock cube. I know I said I’d follow these recipes as closely as I could, but that was just a step too far. Besides, we have no stock cubes in the house.

Finally, add water, bring to a simmer and leave to cook gently for three hours. 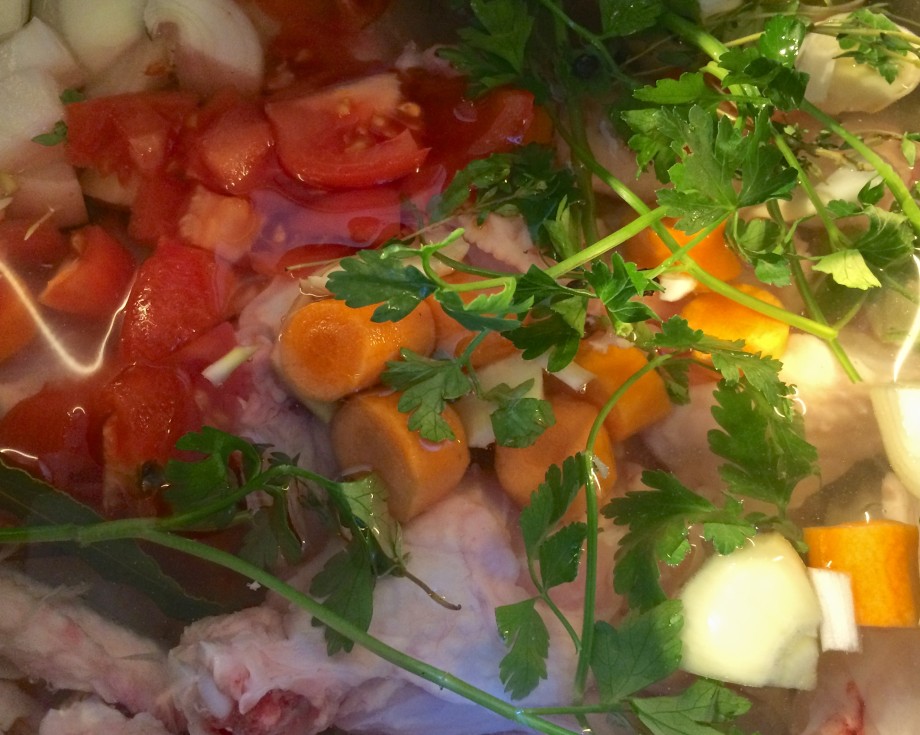 For the next three hours, the house smelled marvellous. The cooking stock gave off a fabulous aromatic scent, and after its allotted time, it had reduced in volume significantly and had turned a rich reddish brown colour. It tasted fantastic. Knorr stock cubes? Pah. 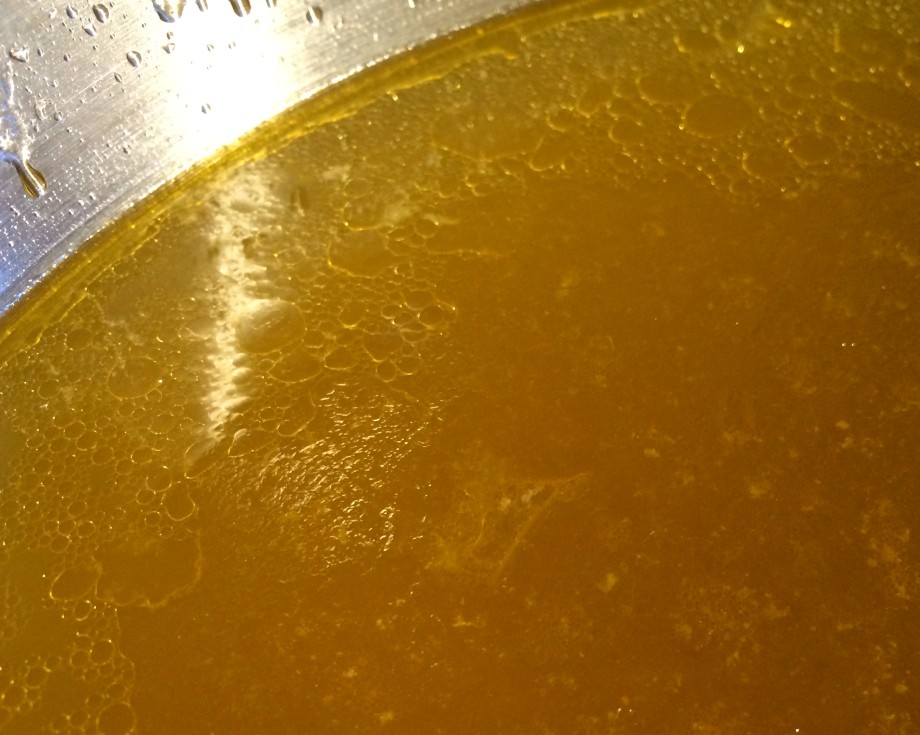 Whilst the stock was simmering, I made breadcrumbs for the meatballs. Last weekend, as well as The Great British Meal Out, I had also made a sourdough loaf. There was still half of that left, and it was starting to get a little stale, so I dried it out properly in a low oven and then blitzed it into breadcrumbs with the food processor.

So, finally it’s time to start on the meatballs. Sauté onions. Soak breadcrumbs in cream. Mix everything with minced pork, minced beef, egg and seasonings – salt, white pepper and a pinch of allspice. Next, form the mixture into walnut-sized balls. Hmm. The mixture felt a little on the sloppy side. Perhaps I added too much cream? And the egg had been rather a large one. Surely it shouldn’t be this moist. Well, we’ll see how it goes… 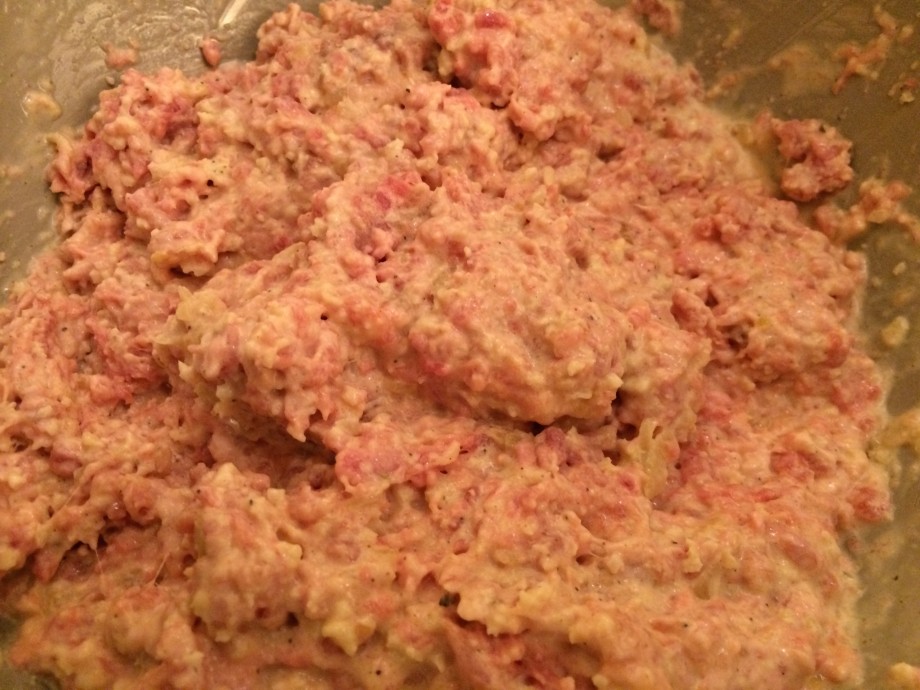 I formed a few ‘balls’ and fried them gently in butter. They did well – they held their shape for at least thirty seconds – but then, as I tried to discourage them from welding themselves to the base of the pan, they gave up and disintegrated into pile of mince. A couple of them held up, but barely. Perhaps I should just make Swedish Hash, rather than Swedish Meatballs. 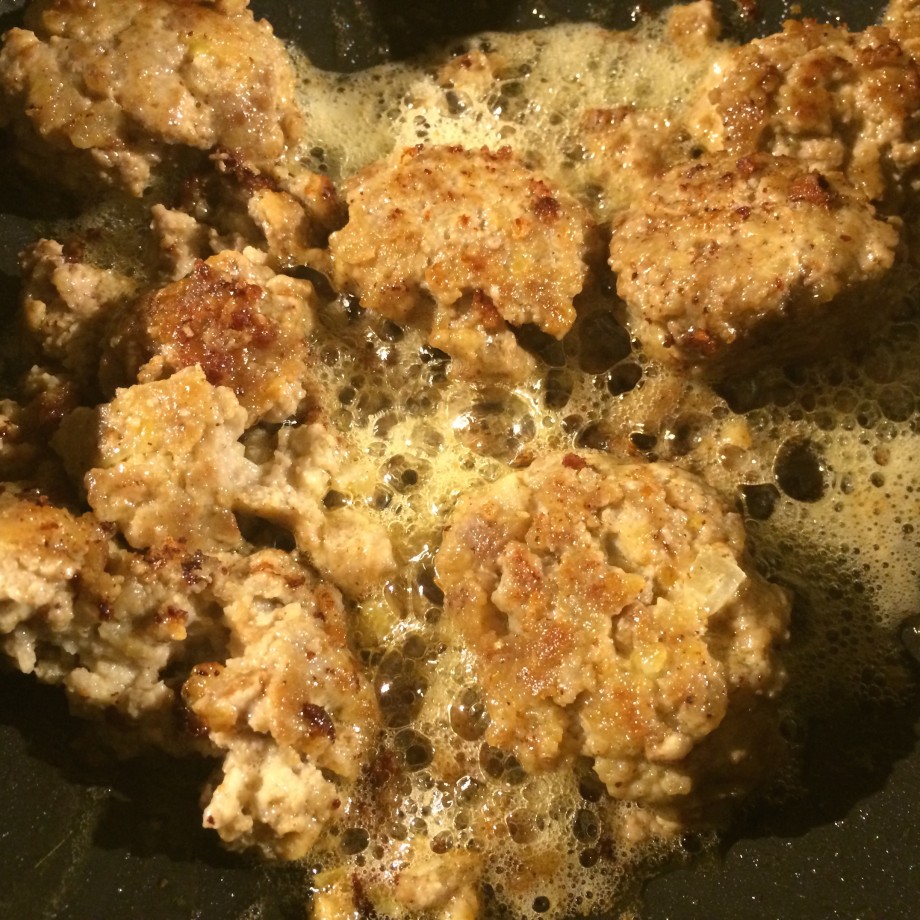 The mix was definitely too soft. I added some more breadcrumbs, and left it for a few minutes in the hope that some of the moisture would get soaked up. I cleaned out the pan, sampling the debris as I went. It looked nothing like meatballs, but it didn’t taste at all bad.

By now, the mixture was looking better – much more solid. This did have a chance that it might hold  together in a pan. I formed a few more balls, and fried them. They worked! Well, I say ‘worked’. They cracked a lot, and looked pretty fragile. They weren’t exactly ball shaped either, but I figure I had the full set of Platonic solids pretty well covered. It was good enough for me. 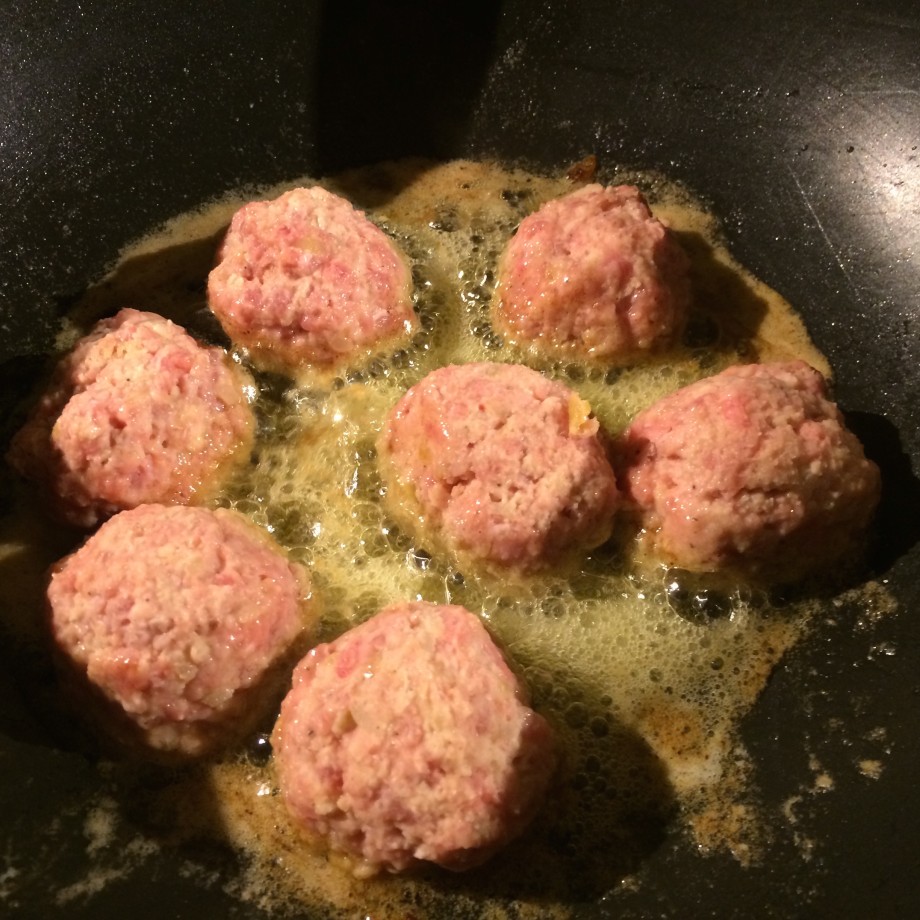 Now the sauce. Fry onions, carrots and celery until soft, add the stock and reduce. Strain into a clean pan. Melt in some redcurrant jelly and season with salt, pepper and allspice. Strain into another clean pan. Good grief, how many clean pans do these people think I have? Add cream, then meatballs and cook for a couple of minutes whilst the meatballs warm through. 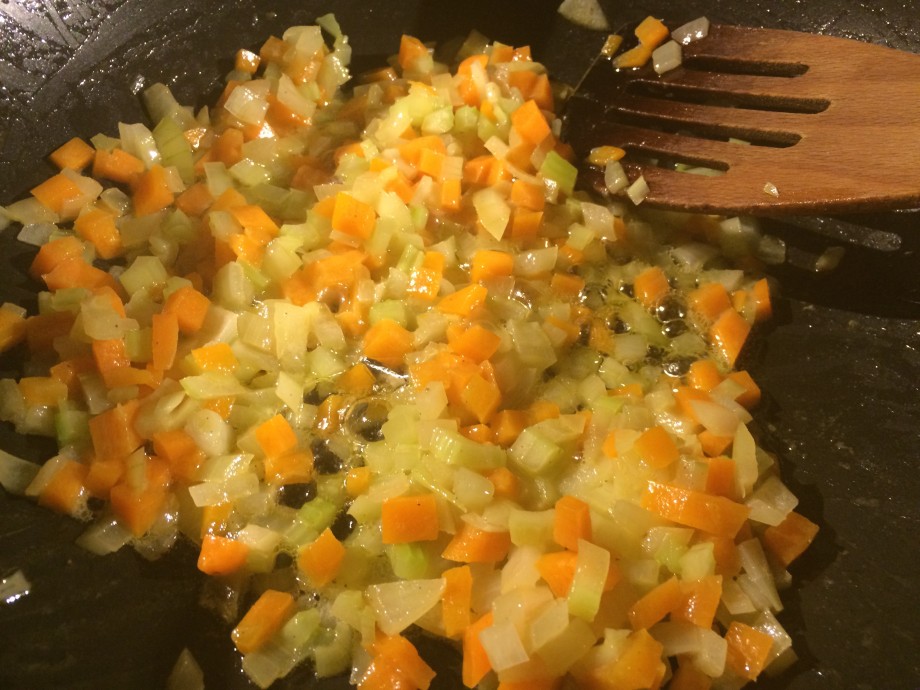 And we’re done. I served these with some plain boiled potatoes. Cranberry sauce was suggested as an accompaniment, but I forgot to buy some, so we had a little of the redcurrant instead. 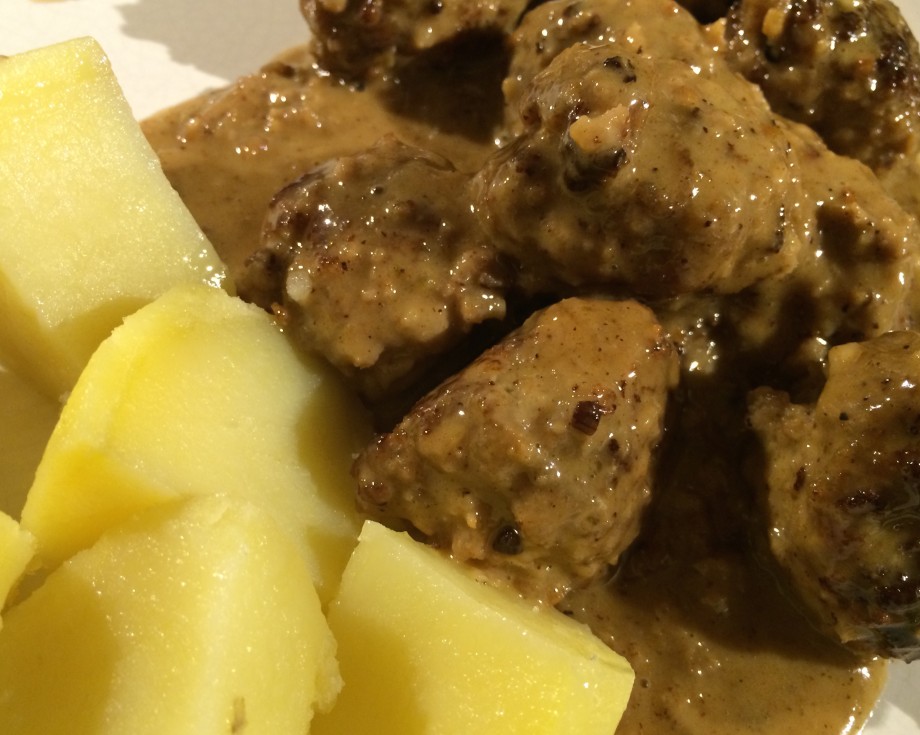 The verdict: the meatballs were delicious. Firm on the outside, soft and creamy within, with a lovely, delicate flavour. The cream sauce was superb, and went beautifully with the meatballs. Plain, boiled potatoes were the perfect accompaniment. The redcurrant sauce on the side was a superfluous addition; the meal stood up perfectly well on it’s own, it didn’t need any help. I may have to make these again sometime.

Swedish meatballs. Well I liked the sound of that. Especially when I read the blurb which talked about a special, creamy sauce.

I think they were hard to cook. There was angst emanating from the kitchen for quite some time. I believe that was because they wanted to be mince rather than balls. But what I got on my plate was a pile of meat balls in cream sauce to die for.

The meat, a mixture of pork and beef, was soft and tasty. Nothing gristly or chewy about them. The sauce was buttery, creamy and with a good measure of gentle umami. Served with simple boiled potatoes and a little redcurrant sauce it was a delicious meal. A winter comfort food type of delicious.

When asked to rate out of 10 I said 10. Dave was skeptical and said he needed a more discerning audience (cheek!). But I meant it. I could not fault them and could not think of anything that would make them better.