By dopiaza on 17th August, 2014 in The Continental Restaurant

I confess I’ve been a little lax these past few weeks. It’s not that I haven’t been cooking, it’s just that I’ve been making things that aren’t in the Prawn Cocktail Years. Well, that’s not going to get this challenge done now, is it. So, onward – I have some interest meals planned for the next week or so.

First, I’ll get one of the easy ones out of the way – I actually made this last week, but it was so unexciting, I didn’t get around to writing it up. Coleslaw. 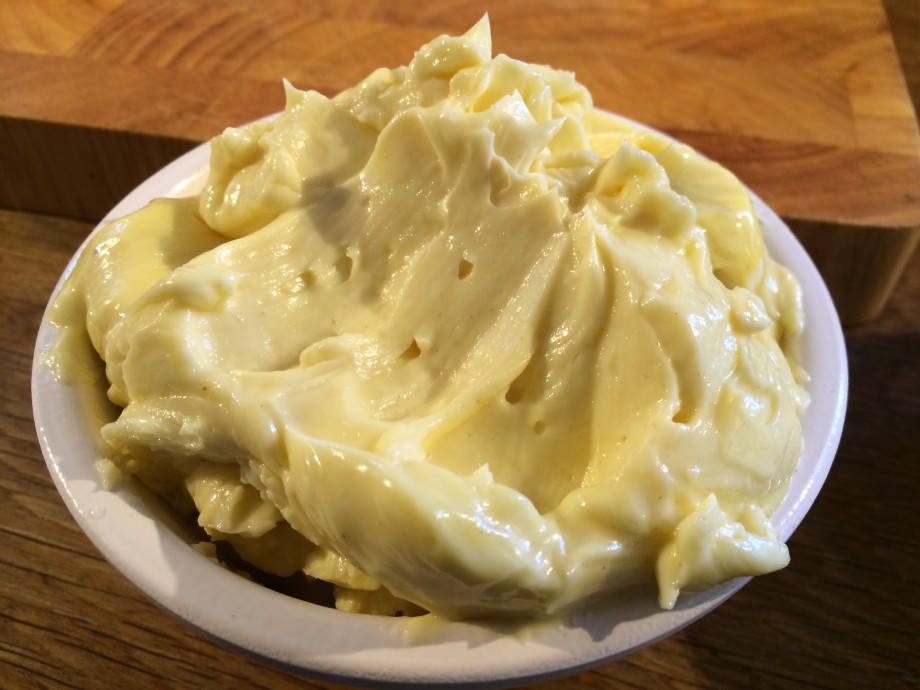 When I say unexciting, I don’t mean it was bad or anything, it’s just, well, cole slaw. I make it all the time. The Prawn Cocktail Years recipe is a perfectly fine example, but I’m afraid it’s not anything I can get worked up about. The recipe in the book, is essentially the standard coleslaw recipe I usually make, but with one major difference. They do not include onions, but add some chopped chives at the end. Now, I’m rather fond of onions, and I always add them to my coleslaw. I think they add a valuable bite to balance the creaminess of the mayonnaise, and can’t imagine excluding them. But, this recipe has no onions, so I guess I ought to try it at least. 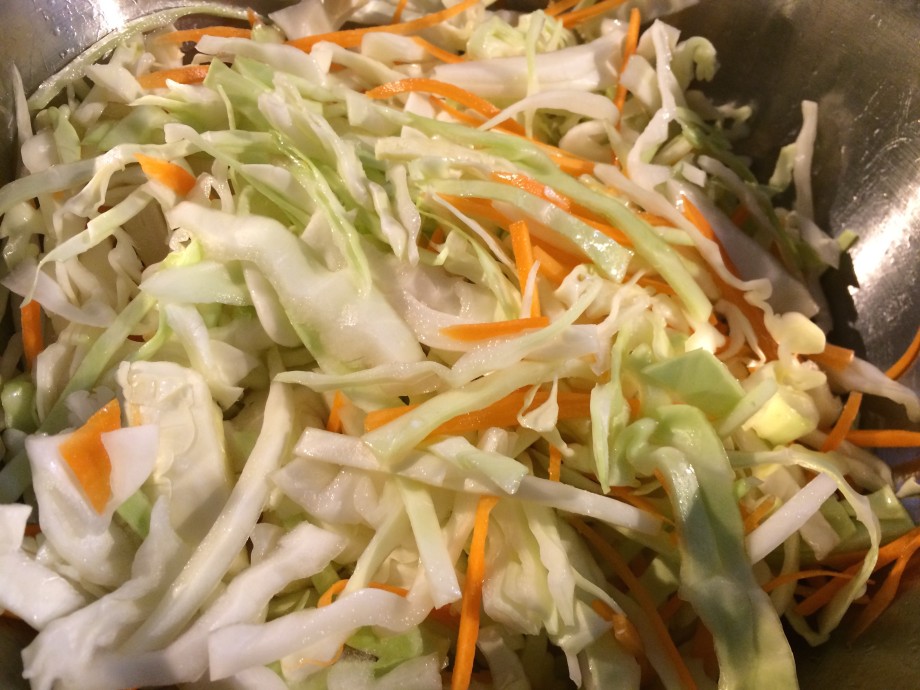 Shred cabbage and carrots, sprinkle with salt, a little sugar and vinegar and leave to drain in a colander for a while. After an hour or so, squeeze the cabbage and carrot gently to remove any excess liquid and then place in a bowl with mustard, mayonnaise, chopped chives and freshly ground white pepper. Mix thoroughly. 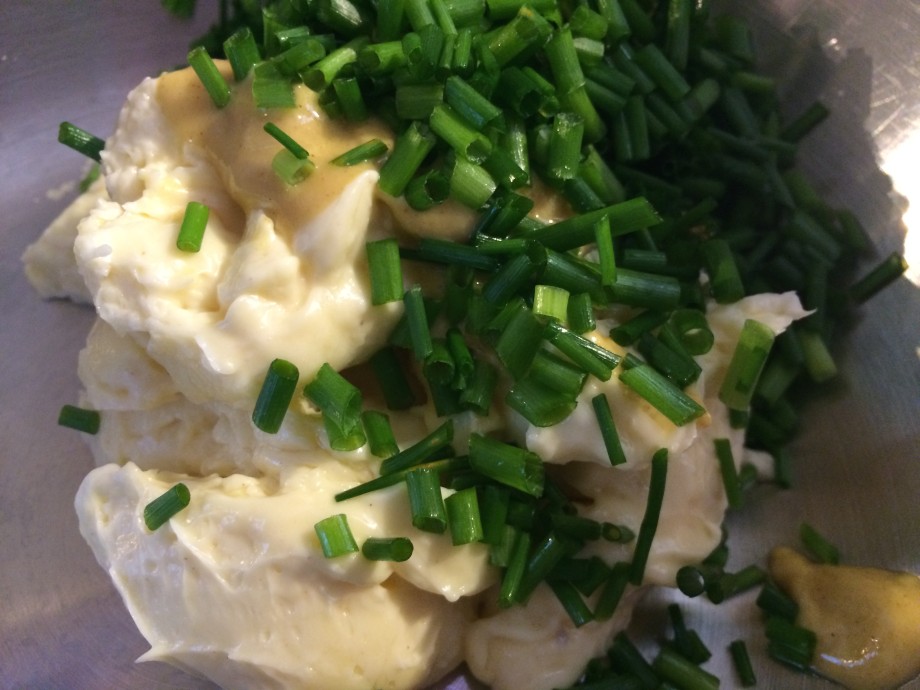 And that’s it. Very easy to make, and always way better than any ready made supermarket version. 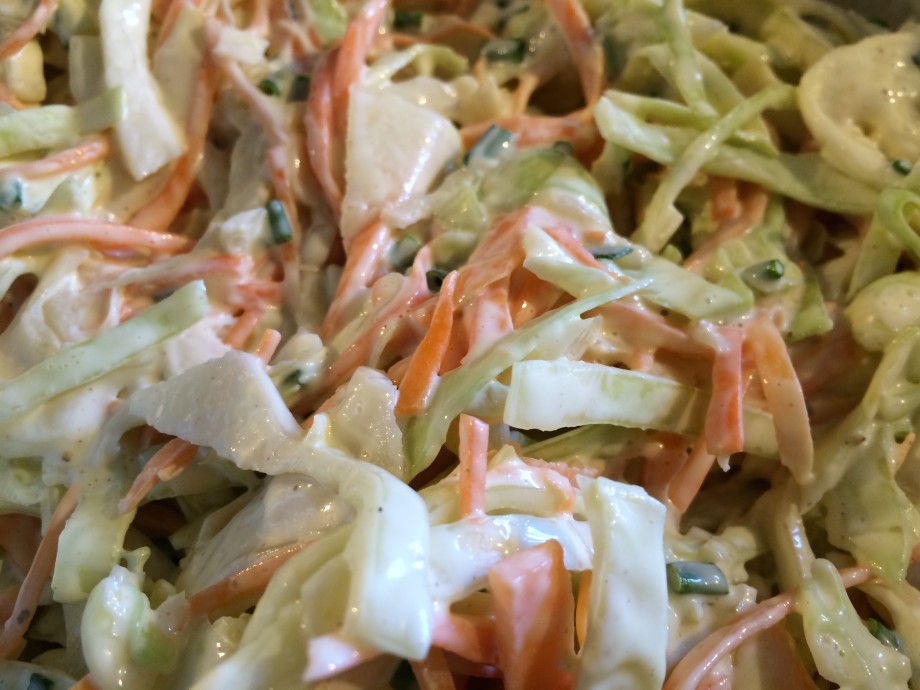 As I said at the start, it was pleasant enough, but to be honest, it was a little bland. What it really needed, to liven it up a little, was some onion…

Home-made coleslaw is so very different to that which we can buy in pots that it hardly seems the same beast at all. For a start the bought stuff always has sugar in it.

Dave is a dab hand at making mayonnaise so this was never going to be a problem for him. He whipped up the mayo, chopped the veg by hand (sometimes he uses a mandolin but not for this recipe) and picked some fresh chives. Voila! Coleslaw.

Dave makes coleslaw a lot so it was easy to compare this scripted recipe to what he normally does and the big surprise for me was that this recipe contains no onion. Just the chives.

I’m not a great big fan of raw onion but Dave loves it so I’m used to this dish being stuffed with sliced onion tricking me by pretending to be cabbage. However, without some onion this dish was less impressive. I realise that what I really need is “some” onion in it rather than the bucket I’d normally find in there. But without it I did indeed miss it. This is a nice slaw, but onion would make it nicer.