After making last week’s Sausage Rolls, I still had a big slab each of pork belly and pork shoulder sat in the fridge. I needed to find a way to use those up. Well, there’s just one recipe left in the Expresso Bongo chapter – Scotch Egg – and that requires mincing up those two cuts of pork. I weighed them, and I had more than enough, so Scotch Egg it is.

A good Scotch Egg is probably as hard to find as a good Sausage Roll. All too often, they are made up of a dry, powdery egg yolk, encased in rubbery white, wrapped in a thick layer of cardboard-textured sausage meat and then coated in something that purports to be breadcrumbs, but that looks nothing like anything that ever fell from a loaf of bread in my kitchen. All in all, they are generally a disappointing experience, and so I avoid them. But perhaps these will be different. After all, the Sausage Rolls I cooked last week were outstanding, I have high hopes for the Scotch Egg.

It starts with ten eggs, which I boil and then cool under running water. 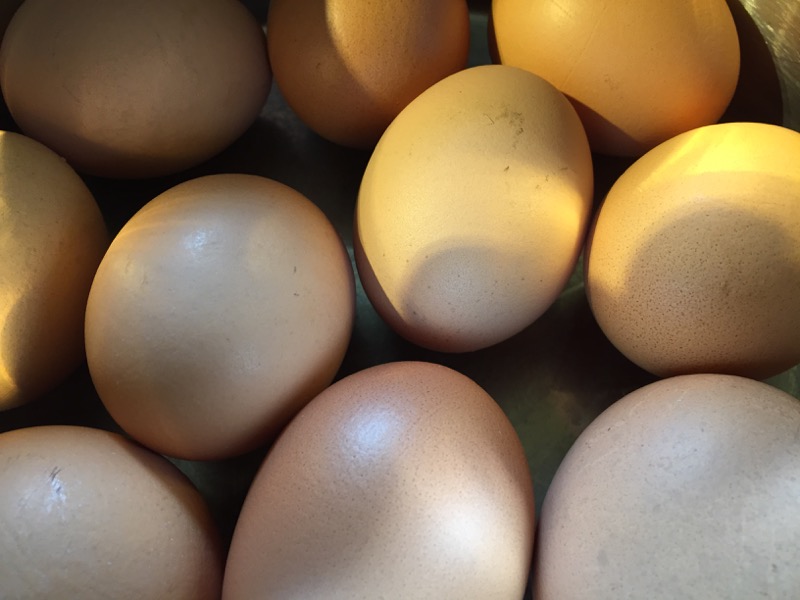 While the eggs are cooling, I prepare the sausage meat. Pork belly, pork shoulder and streaky bacon. 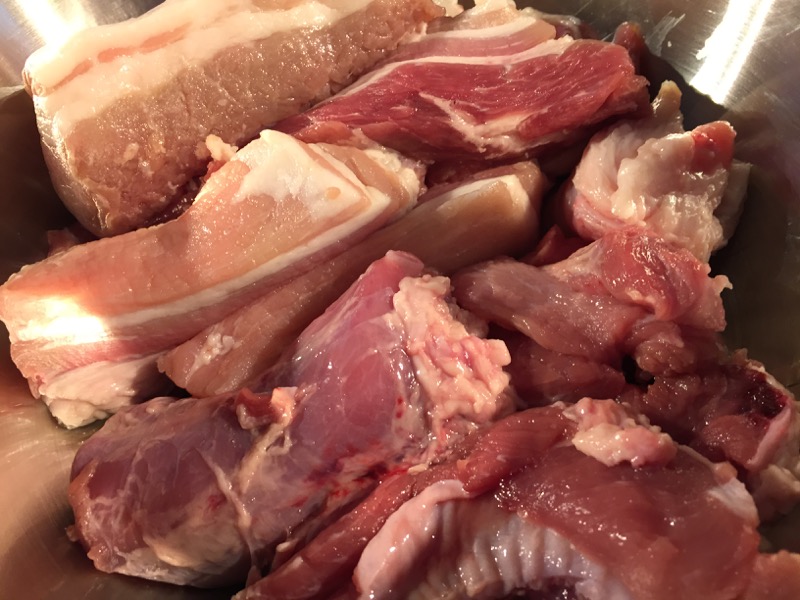 I mince the meat twice – this sausage meat really needs a fine smooth texture to hold around the egg. 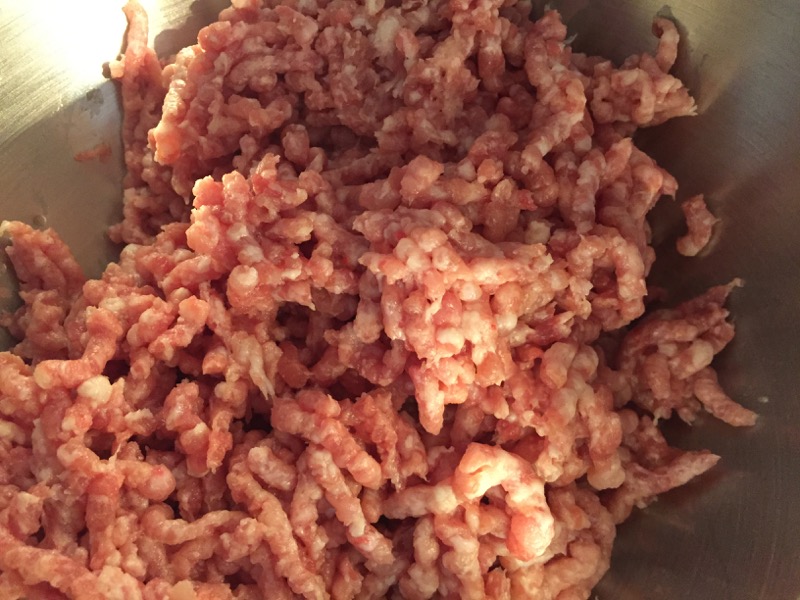 I get some herbs from the garden. 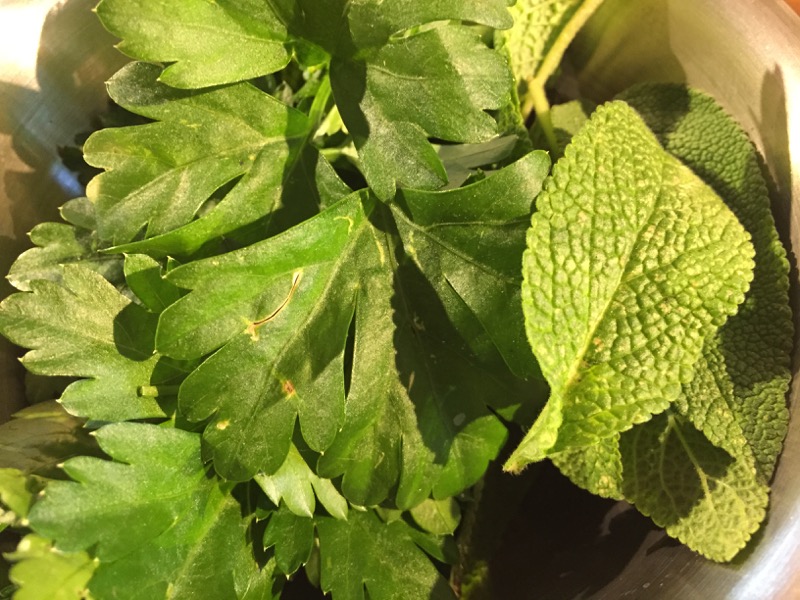 And then I mix the meat together with the chopped herbs, some seasoning and lemon zest until it’s all well combined and smooth. 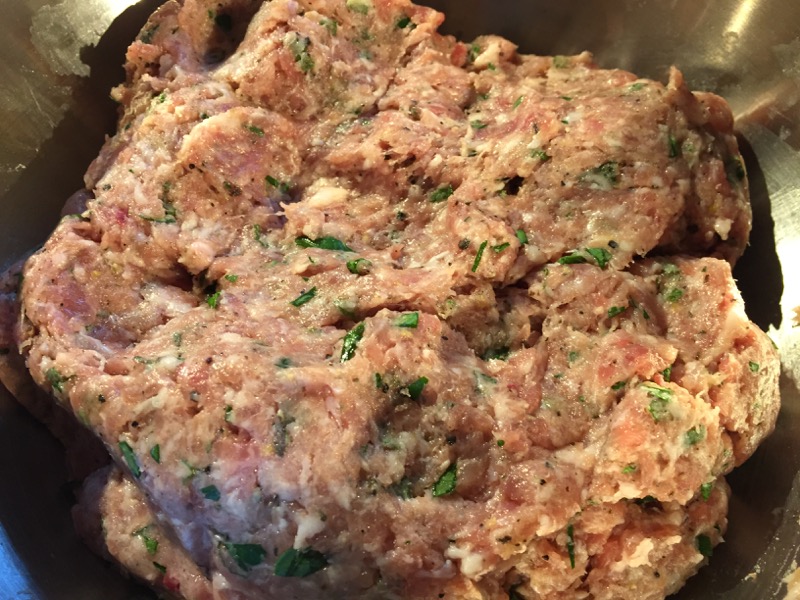 Now for peeling the eggs. Very fresh eggs are always a pain to peel – the shell somehow welds itself to the surface of the egg and these were no exception. Luckily, they don’t have to be perfect – they’re going to be shrouded in sausage meat shortly, so a few pock marks don’t matter. 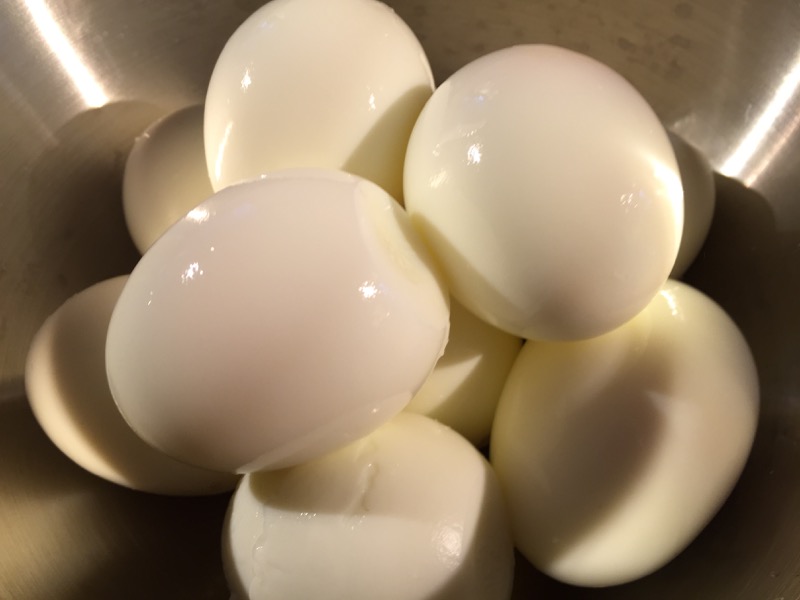 Finally, the breadcrumbs. I take some old, slightly stale bread and blitz it in the food processor. 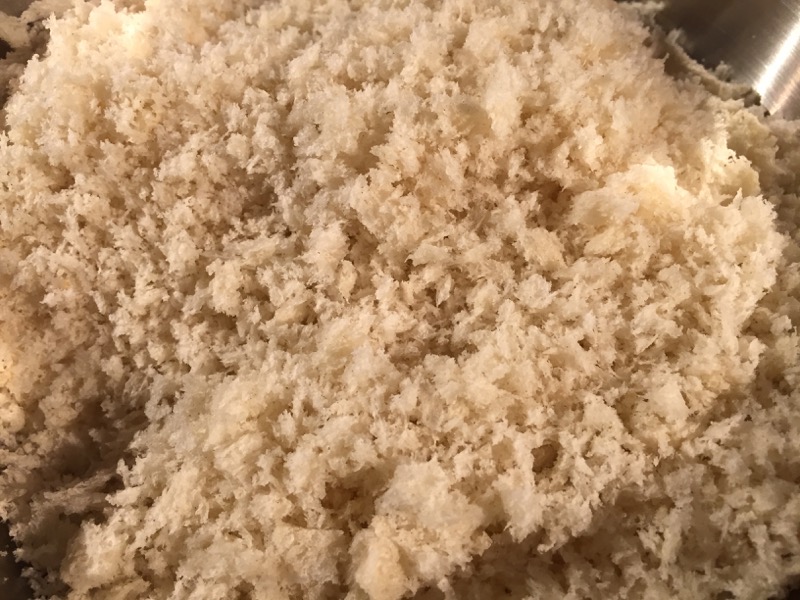 So, to assemble, I take some of the sausage meat and flatten it into a patty. 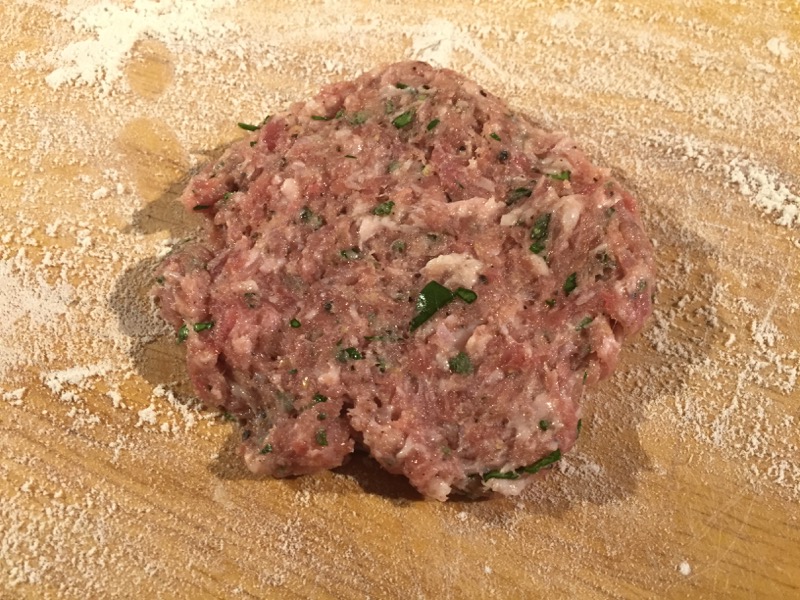 I place an egg in the centre. 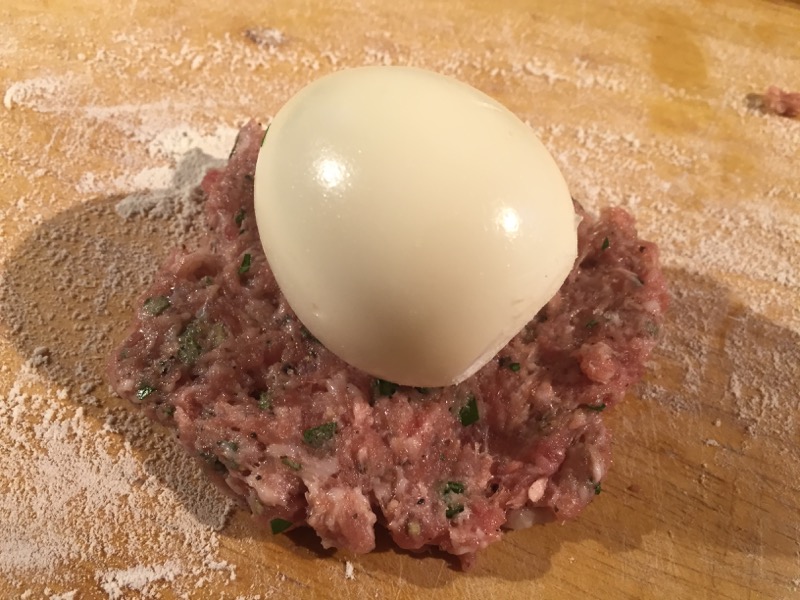 And mould the meat around the egg. 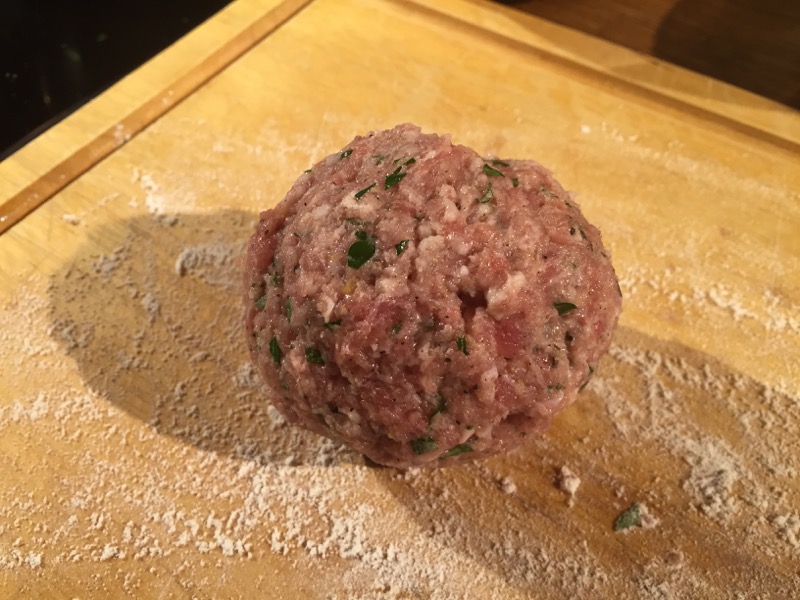 Finally, roll the egg in flour, dip into some beaten egg and then roll in breadcrumbs. 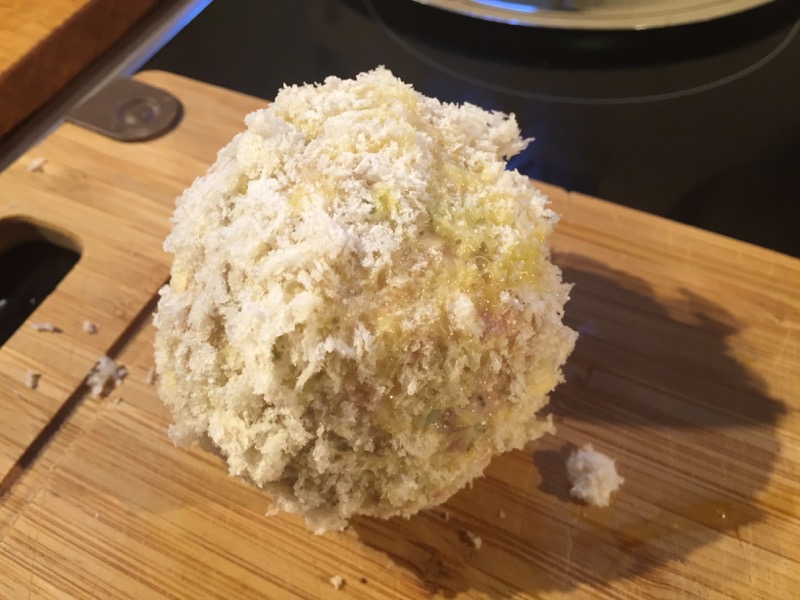 Repeat for all ten eggs. 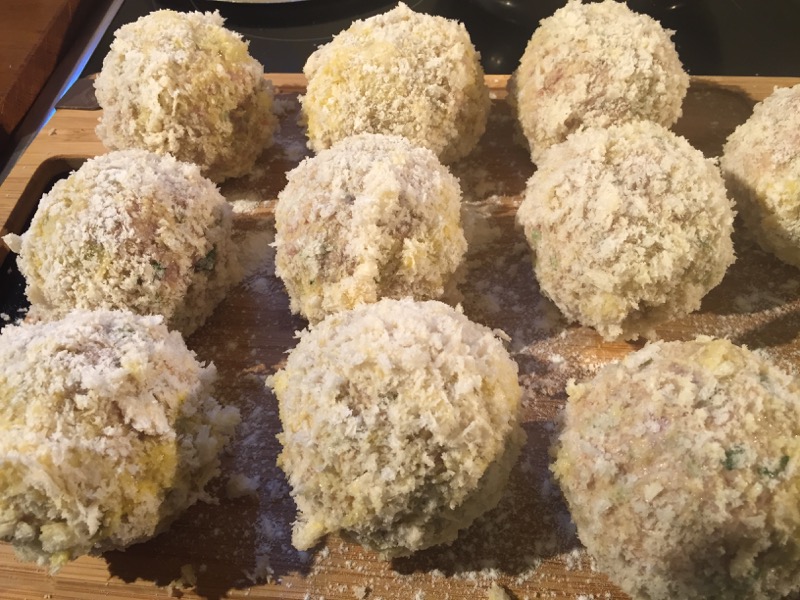 To cook, I deep-fry the Scotch Eggs in vegetable oil until they are a nice golden brown colour. 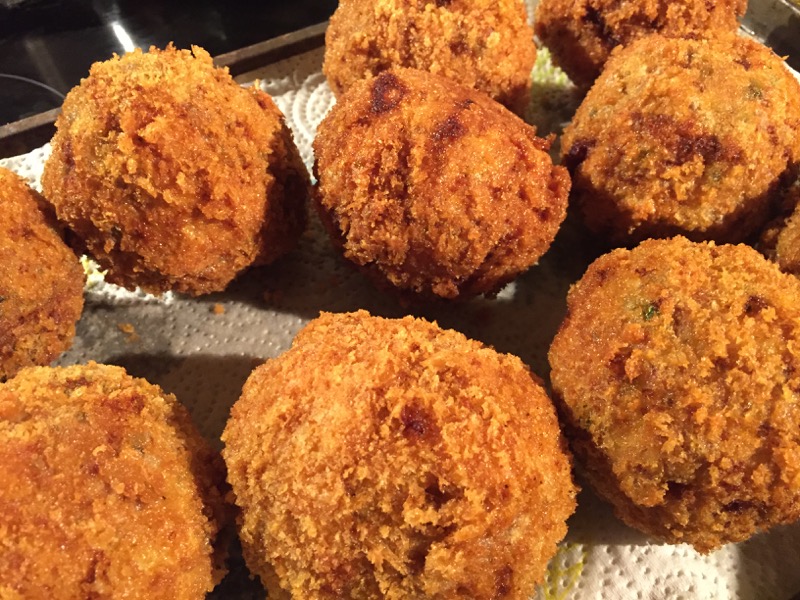 I serve the eggs with salad and a little piccalilli. 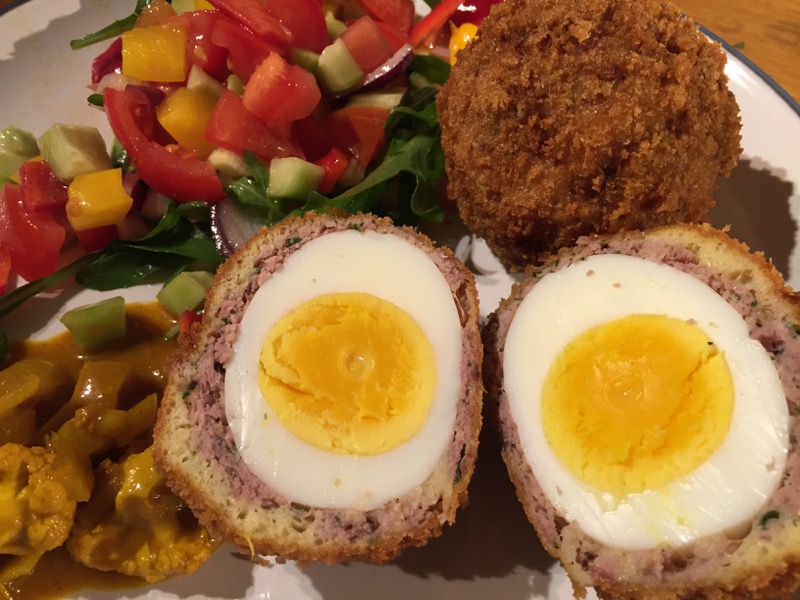 So, after all this effort, were they better than their mass-produced, shop-bought counterparts? Yes, easily. Were they delicious? Well, no, not really. They were nice enough, but they could have been so much better, I think. The egg itself was cooked beautifully – the yolk was soft and creamy, and the white tender. The breadcrumb shell was crunchy with just the right amount of bite. The sausage meat, however was thin and, to be honest, rather bland. It really needed to be much, much thicker in order to contribute anything to the overall flavour.

In the opening paragraphs of this recipe, the authors criticise the mass-market Scotch Eggs for having a sausage meat layer that was “several sizes too big for the egg”. I fear that these eggs were at the other extreme, with far too little sausage meat. Now, I realise that my eggs are probably rather larger than the ones they would have used (we get ours from the local farm and they are always on the large side), but I did up the amount of meat I was supposed to use, to help compensate. Clearly, I didn’t increase it enough. Oh well.

All in all, these were just OK. They’re not at all unpleasant, just rather dull. The Sausage Rolls were wolfed down as fast as we could eat them, the spare Scotch Eggs are still languishing in the fridge.

I like Scotch Eggs sometimes but the ones I can buy ready made have such tiny insipid eggs inside them. Normally we only eat the huge and delicious organic eggs from the farm down the road. So I was looking forward to these Scotch Eggs from scratch.

The breadcrumb coating was light and crisp. A perfect crunch. The egg was large, perfectly cooked, still soft but not too soft, and the yoke a bright golden colour. But I was disappointed with the sausage meat coating. It was too thin and therefore didn’t have much flavour. It resulted in a rather flavourless meal if I’m honest. The sausage coating needed to be thicker and more savoury, which I guess means more spices and condiments.

I thought I was going to be well fed at work for the week with these in the fridge, but I’ve not taken even one!

A bit of a disappointment.