By dopiaza on 4th April, 2015 in Expresso Bongo

Let’s start with a confession. I hate making pastry. I always have. It’s not that I don’t like pastry – when it’s done well, pastry is delicious. The trouble is that whenever I make it, it’s not done well. It’s OK, I guess – it’s always edible. It never actual tastes bad, it’s just never how I really want it to be. It always a bit too dry, or a bit too wet, or a bit too hard, or a bit too crumbly – it’s never really just plain ‘right’. In short, I’m not very good at making pastry.

I know, I know, I should just practice more. I mean, that’s how you get better at these things, right? You keep on doing it until you’ve got the technique right, and you can repeatedly make decent pastry. The trouble is, when you’re not very good at it, the whole process of pastry making is stress-laden, hard work and leaves the entire kitchen covered in a light dusting of flour. So, I tend to shy away from it. Besides, you can buy pretty decent ready-made pastry from the supermarket.

Well, there’s no shortcuts here. If I’m to make Hopkinson and Bareham’s meat pie, I need to make some pastry.

Pastry making sure is stressful though. Throughout the afternoon, I procrastinated about getting started. It wasn’t until about six-thirty in the evening that I thought I’d better get on with it. I looked at the recipe again, and only then realised that the pie demanded a whole two hours in the oven. I really had to get on with things.

Now, a few weeks ago, I treated myself to a new kitchen gadget. It’s something I’ve been coveting for a good few years now – a KitchenAid stand mixer. It’s Candy Apple Red and is a thing of beauty and wonder. Since getting it, it’s seen almost daily use and I’ve made no end of cakes, bread and other delicious goodies. I even made pastry in it the other week, which came out pretty well. So, my new mixer would certainly help me here, I was sure. 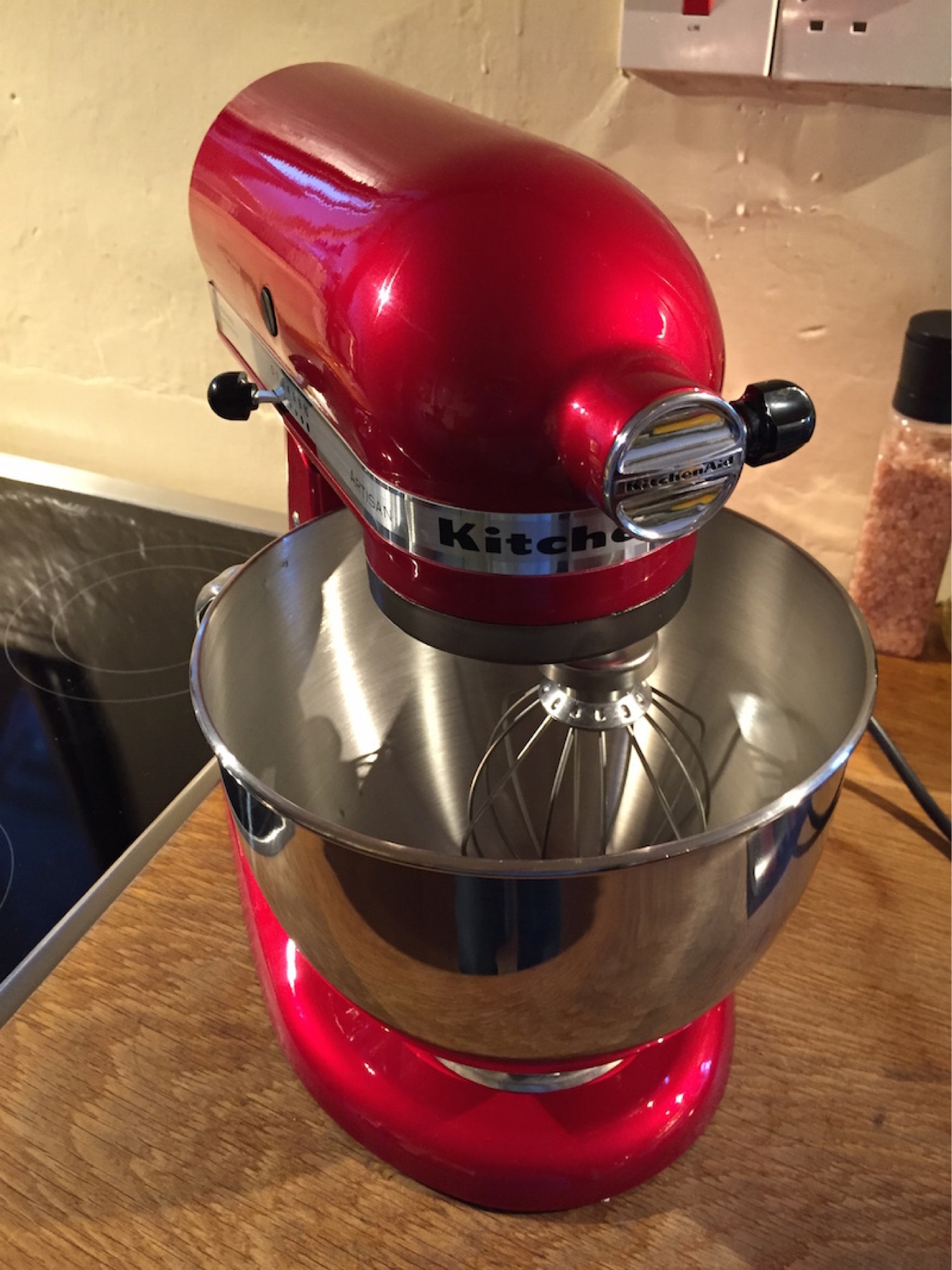 Did I mention that I find making pastry stressful? It’s so stressful, that I forgot to take photos of the actual pastry making part. Here’s a photo of the flour, salt and lard in the mixing bowl, but I’m afraid that’s it until we get on to the filling. 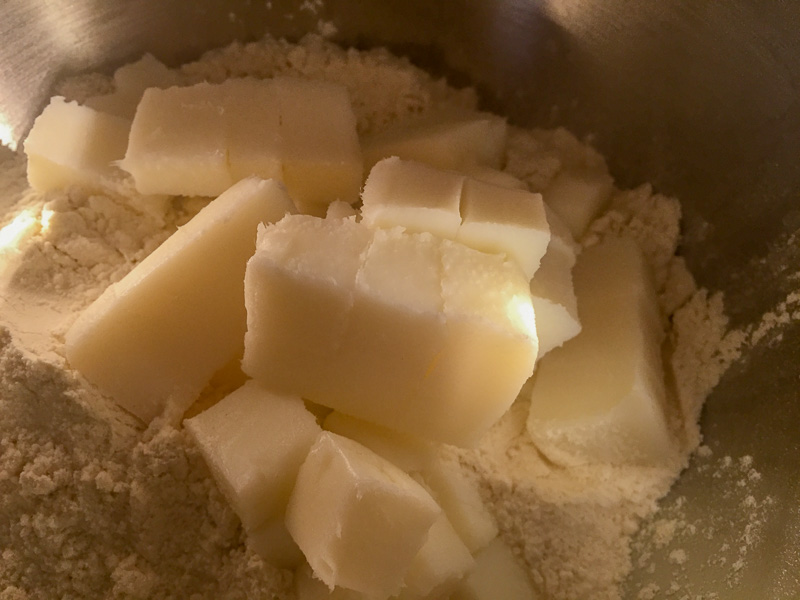 So, beat the fat into the flour until you have coarse breadcrumbs. Then add water until it comes together, wrap in cling-film and put in the fridge to rest.

Now for the filling. Stewing steak, potato and onion, chopped into small pieces. 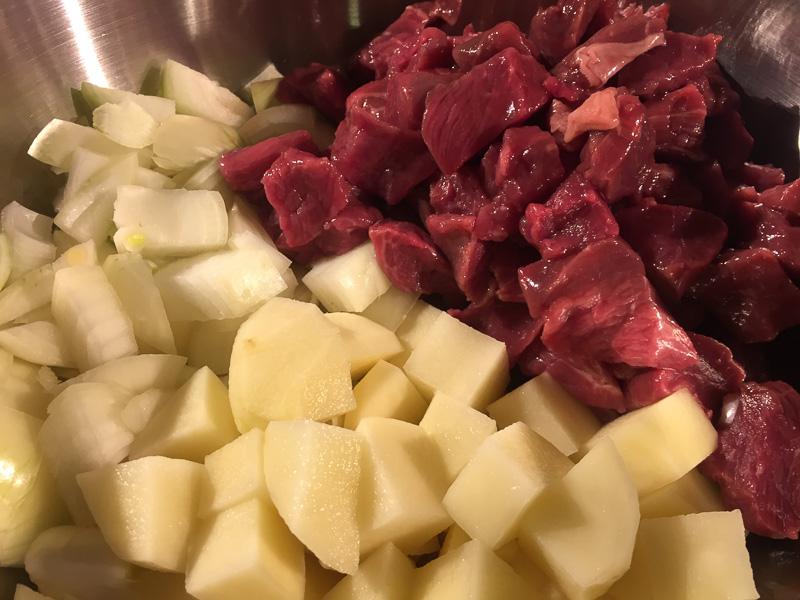 Then, mix thoroughly, with salt and plenty of white pepper. 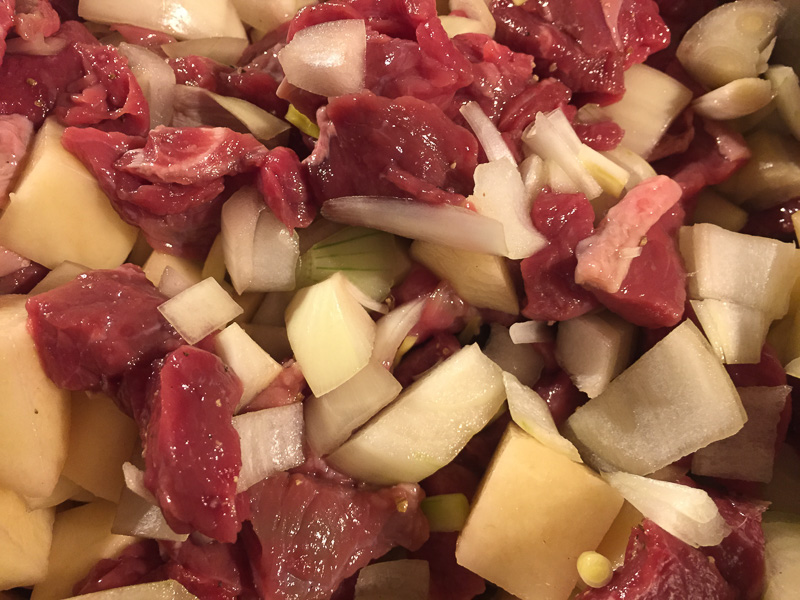 Now I need a loose bottomed, pastry tin, 3cm deep by 20cm wide. I don’t have anything exactly those dimensions. I have one a little wider, and just a touch shallower. I guess that one will do. I grease it, roll the pastry out and line the dish with it.

So, did I mention that I find making pastry stressful? I think I did. Maybe it was my dread of pastry-making, or perhaps I was simply rushing because it was getting late and we still had at least two hours before we could sit down to dinner, but something was clearly preying on my mind at this point. If I had been thinking clearly, I would have read the next paragraph in the recipe properly, rather than skimming over it quickly.

I piled the filling into the base. The pastry was looking a bit scrappy, but it seemed to be holding together. 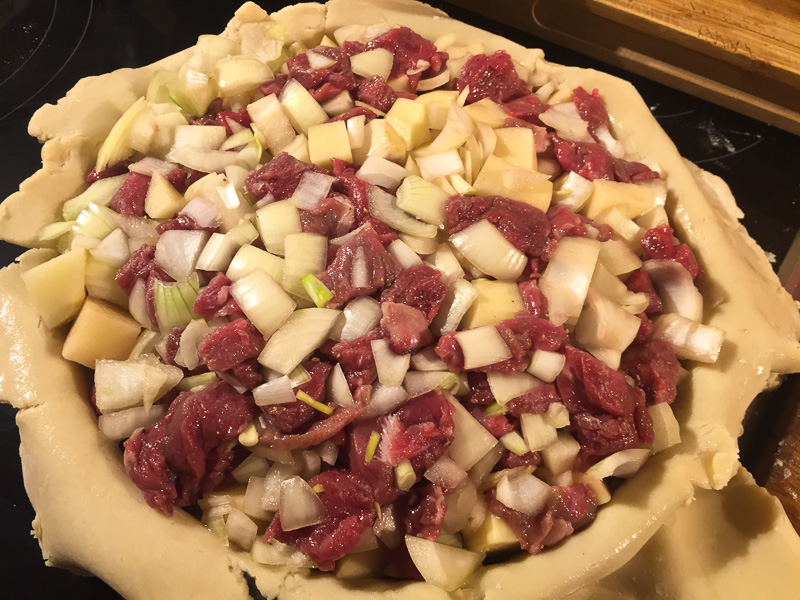 Next, I rolled out the top and placed that over the filling, sealing the overhanging edges and then brushed it with beaten egg. 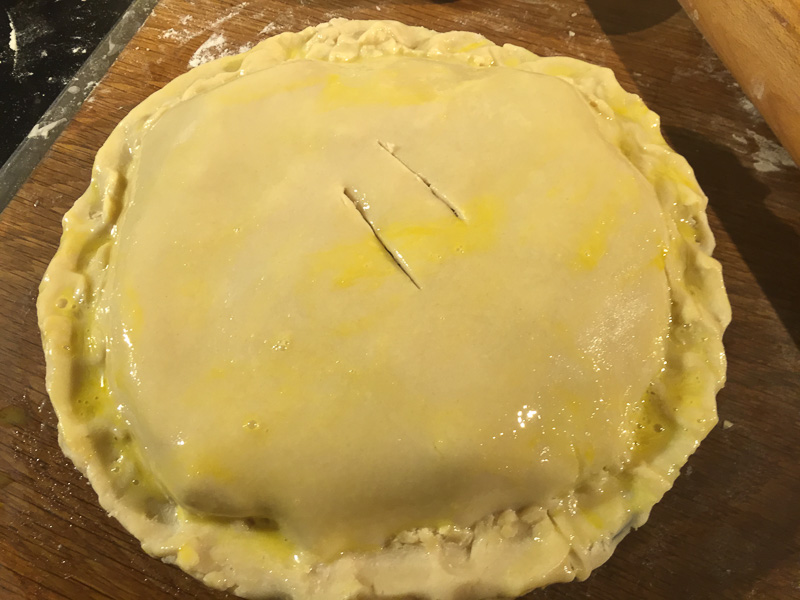 Well, it wasn’t exactly pretty. I didn’t think I was going to get marks for presentation here, but it was all in one piece. Into the oven it went.

Two hours later, a pie emerged. It smelled good. Not exactly a thing of beauty, but it was most definitely a pie. 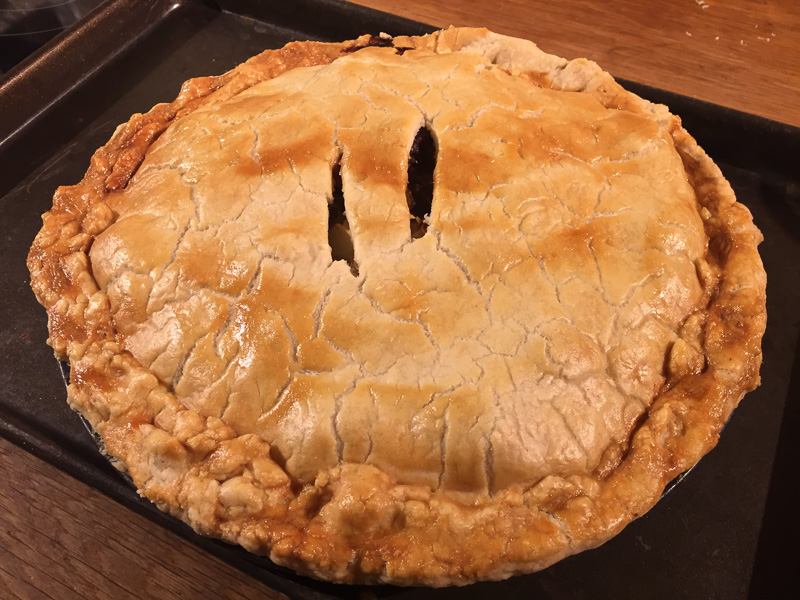 I served it with mushy peas and, as the book recommended, a splash of malt vinegar. 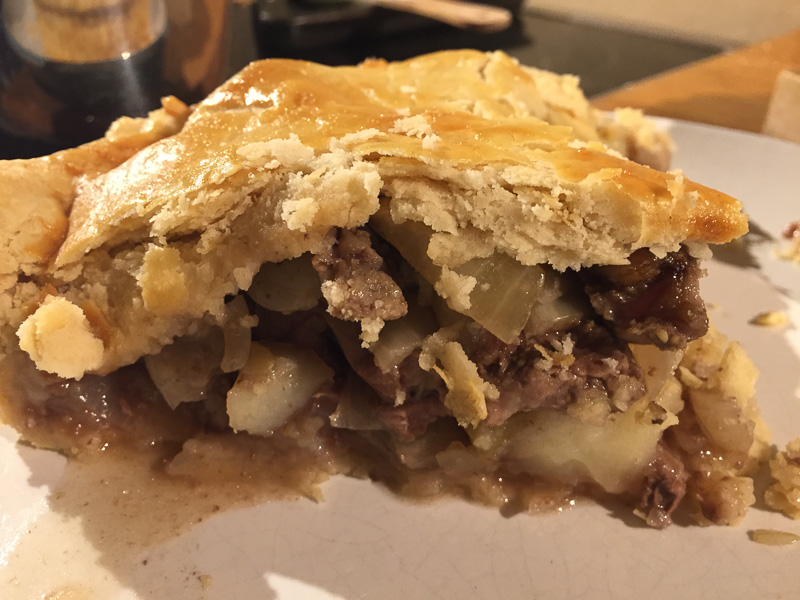 It tasted really good. The pastry was very crumbly, but was well cooked, with good flavour. The filling was delicious. All in all, I was very pleased with the outcome.

The only problem with it is that the pie I made wasn’t quite the pie in the recipe. I didn’t realise it until later, but in my haste, I had missed out two crucial steps. The first was I didn’t add a tablespoon of flour to my filling mixture. The second was that after putting the filling into the base, I should have added water to just reach the surface of the filling. Of course, this pie is supposed to have a gravy inside. The water would form the base of that and the flour would then thicken it. The pie I made was tasty, and whilst it certainly wasn’t dry, I can see that some more moisture inside would do no harm.

So, what to do? I think that this was a big enough mistake that I need to make this dish again. I’m not going to cross it off my list and mark it as ‘done’ until I’ve done it properly. I guess we’re going to be having meat pie again in the near future.

Well I must say I like the new “red devil” food mixer because all of a sudden Dave is no longer put off making cakes and pastry.

Meat pie, sounds a bit boring.  But this was anything but.  Lovely beef with onions and potato inside the lightest of pastry.  Cooked long and slow so that the juices were rich and sweet.  I loved it.  It was like one of Dave’s traditional Cornish pasties.

As a child I hated Mum’s meat pies.  But this was a delight.

The only room for improvement is the pastry, because it was so short that the pie would never have successfully left the tin, so had to be served from the pie tin.  But it was such lovely pastry to eat.

All in all I could happily eat a pie like that now and again.

One Response to Meat Pie