I’ve always found The Prawn Cocktail Years recipe for Seafood Pancakes to be a little off-putting. It sounds delicious, but there are so many extravagant ingredients and so many steps. Many’s the time I’ve looked over the recipe, thought to myself that it looked way too hard, and moved on to something else.

But, I have to make it, so now’s the time. I have tried making the seafood pancakes a number of times since I started this blog, but have never been successful. Seasons and stocks are fickle things, and each time I checked, at least one of the key ingredients wasn’t readily available.

But this past week, it all came together. Lobster, scallops, prawns and mussels were all in stock at my favourite online fishmonger, and so I placed my order. 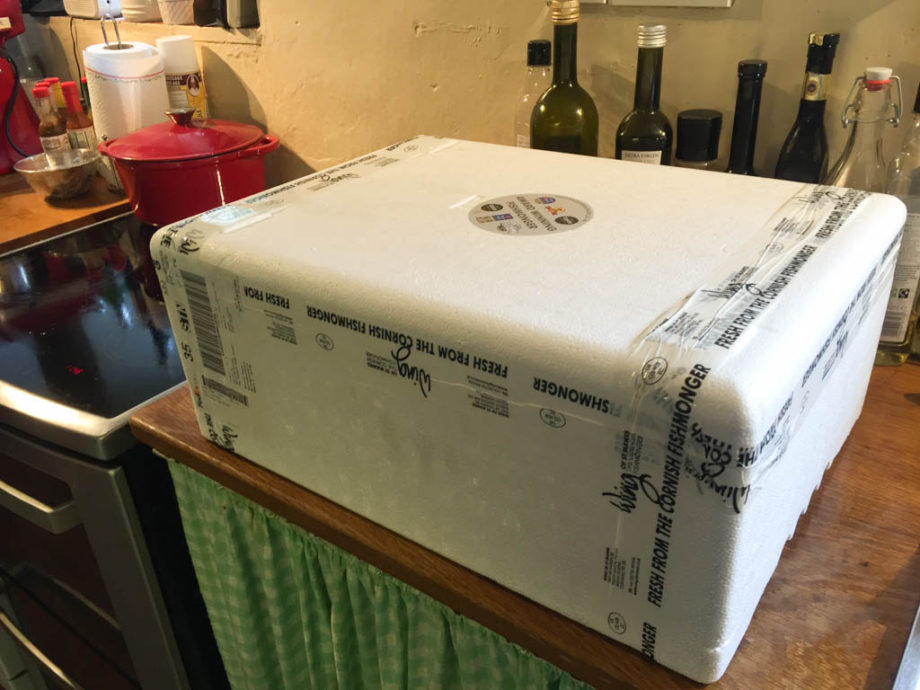 I figure that if I was going to do this, I should do it properly. I ordered a live lobster, rather than a cooked one. Now, this was a first for me – I’ve eaten cooked lobster many a time, but I’ve never actually cooked one myself. It was going to be just like Annie Hall, I was sure.

I open the box and peer in. The lobster is sat in the corner, wrapped loosely and surrounded by ice packs. I fish him out and put him on the kitchen counter. At first, he just sits there, but after a minute or so, he gets a little more adventurous and starts to wander. He’s a cute little fellow, perhaps I should give him a name. Larry. Larry the Lobster. Now Larry’s mooching about, he’s in danger of walking off the edge of the counter, so I pick him up and put him back in his box. 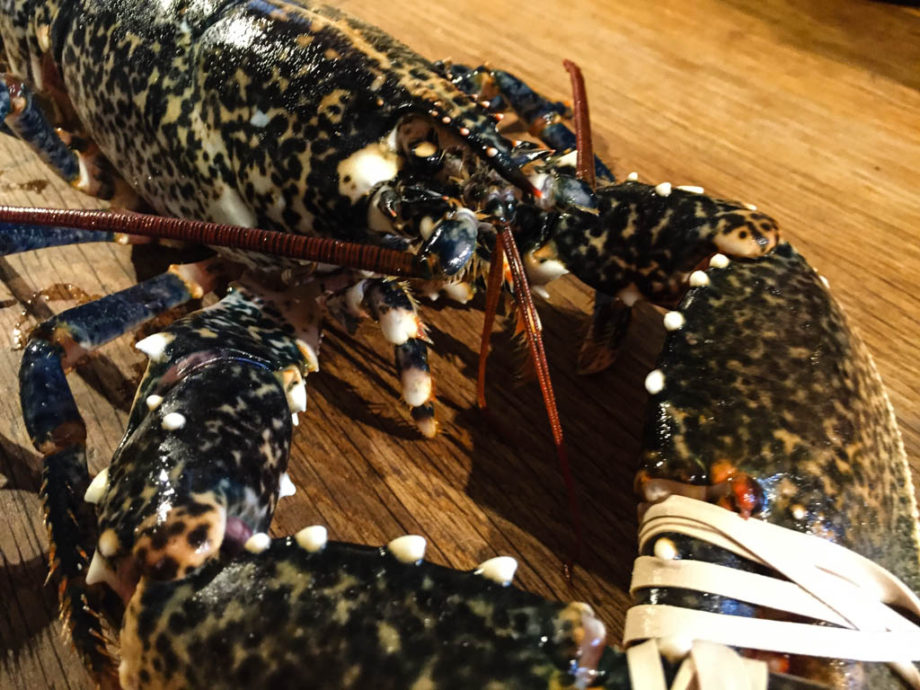 Next stop, Google: how to cook a lobster. The best method seems to be to put him in the freezer for half an hour or so, so he should basically fall into a coma, and then drop him straight into a pan of boiling water. Recommendations for cooking times vary enormously though – everything from 5 to 15 minutes per kilo was suggested. I settle on 10 – I figured that as the pancakes are going to be baked in the oven later, it wouldn’t matter if this initial cooking wasn’t spot on. And once I’d finished, I’d have a much better idea if that was too much or too little, after all, there are a couple of other lobster recipes in this book.

So, cooking the lobster turns out to be pretty straightforward, Larry is soon an ex-lobster and has turned a rather attractive red. 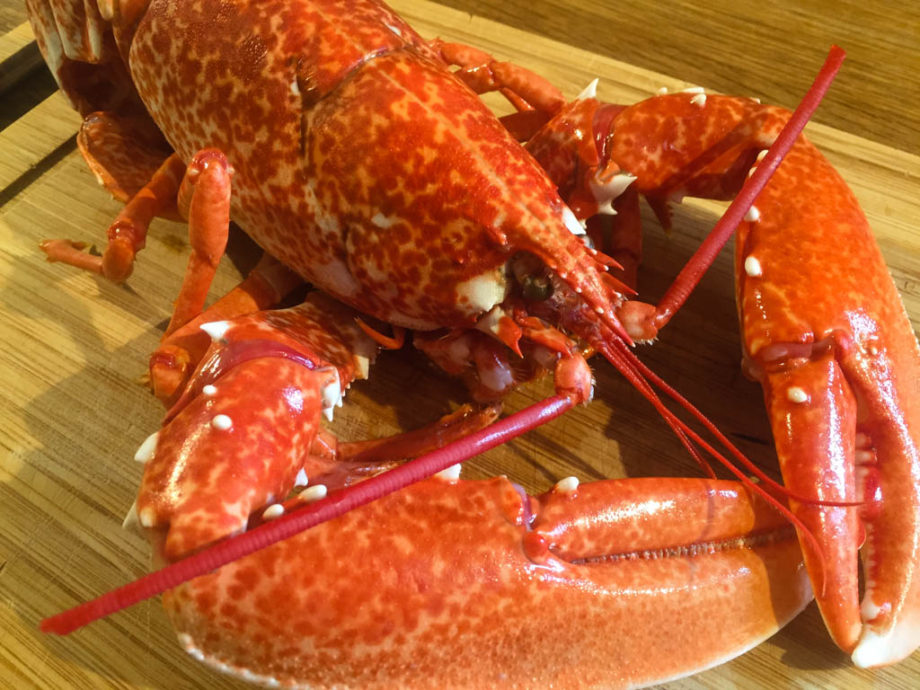 The prawns are also uncooked, so I steam them for a few minutes, and then peel them. I also remove Larry’s head and peel the shell off his tail and slice it. 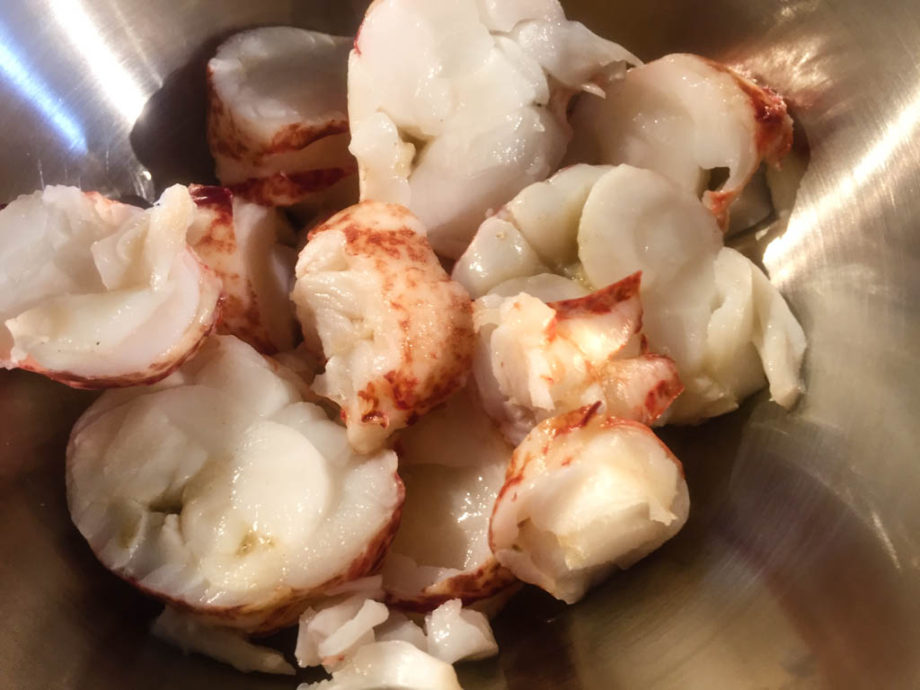 Now to start the sauce: fry onions gently in butter until golden, then add tomatoes and cook until soft. 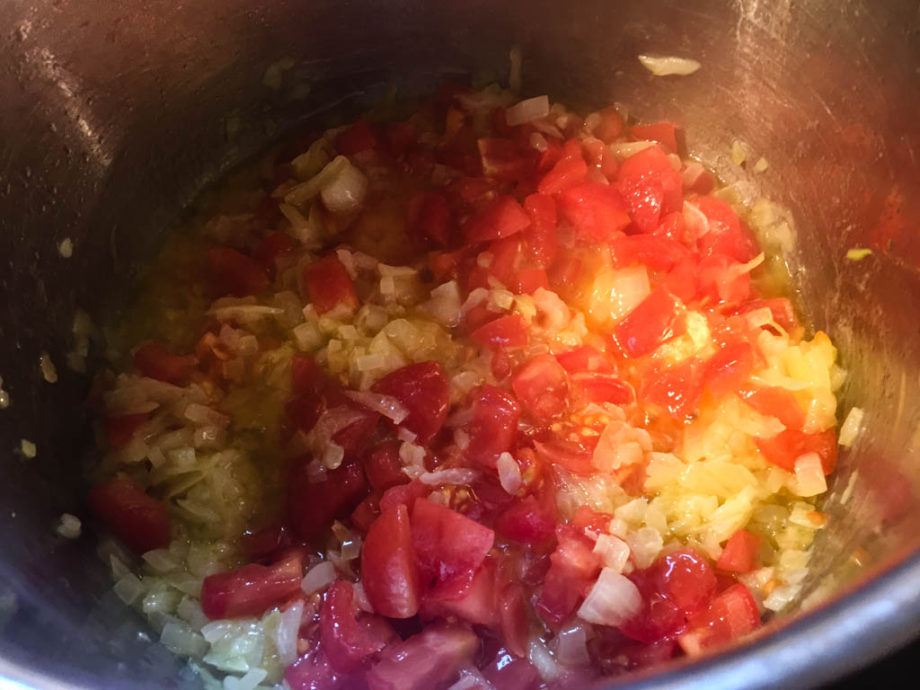 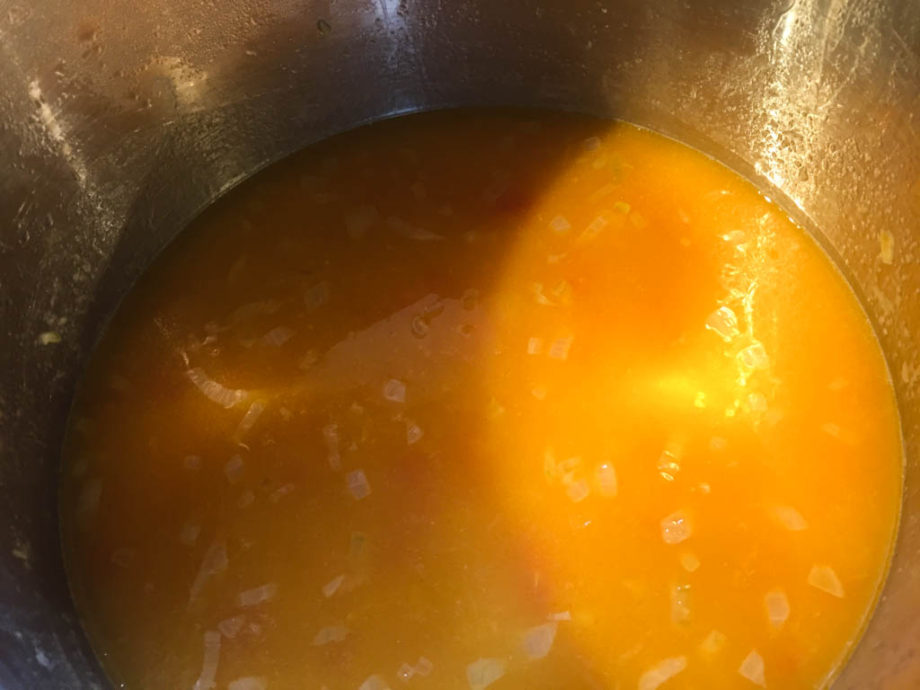 Whilst that reduces, I clean the mussels, and add them to the pot, cooking them for a few minutes until done. Then, drain the mussels in a colander, catching all of the juices in a bowl. Once cooled a little, I shell them and put them to one side. 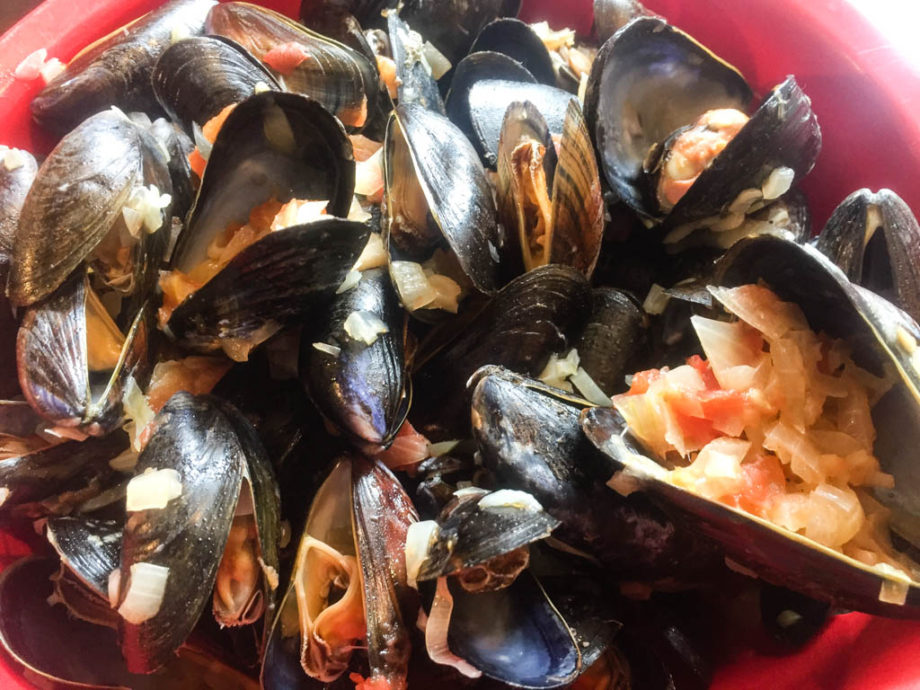 Finally, I add the prawn and lobster shells to the drained mussel juices and simmer to make “an intensely flavoured fish stock”. And boy is it intense – I can feel my hair curl as I taste it – but it is very, very tasty. I strain it again and then continue to reduce it – the recipe said “until it is syrupy” – is that a thick syrup or a thin syrup? Dunno. I just guessed. 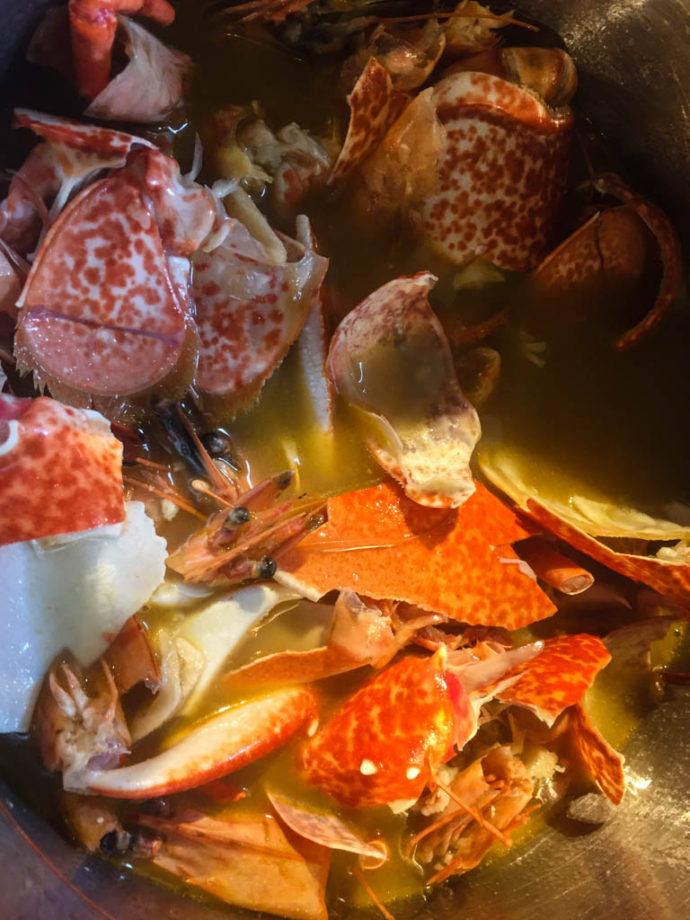 Next, the recipe calls for me to add the cream, and simmer until “unctuous and the consistency of custard”. Again, is that a thick custard or a thin custard? Who knows? I simmer, it thickens a little and soon it does have a custard-like consistency. That should do. Finally, some tarragon, lemon juice and cayenne, and it’s done. I set some of the sauce aside to pour over the pancakes.

Next up, the seafood itself. The prawns, lobster, mussels and some diced scallops go into the sauce, and simmer for a few minutes, then it gets left to cool and put in the fridge for a while. 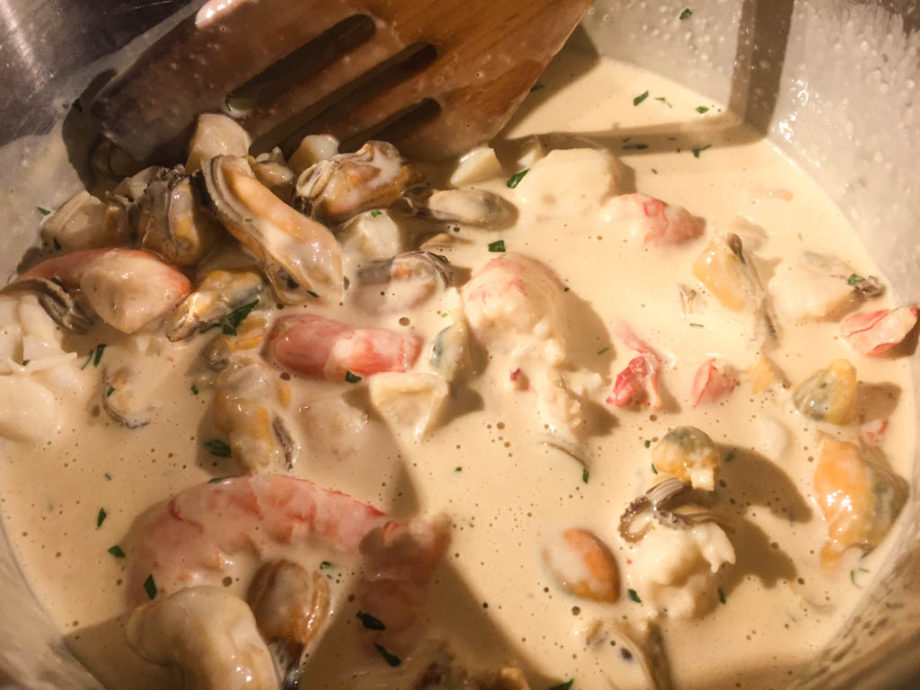 Whilst the filling is chilling, I make the pancakes. This looks like a regular pancake batter recipe, but with a bit more egg than I would usually use, and including melted butter, which I don’t normally add to my pancake batter. So, I whisk up the batter. It doesn’t look right – it’s lumpy, but it’s not the flour that’s lumpy. It seems that the melted butter immediately un-melted and formed little clumps of fat in the batter. That’s clearly not going to work, so I just sieve the batter and leave the butter-balls behind. Making the pancakes was pretty easy – I’ve tossed thousands of pancakes in my time. The recipe said to not make these too thin, and so they are a little too thick to toss, so I cave in and use a spatula to flip them. They come out just fine, despite the lack of butter. 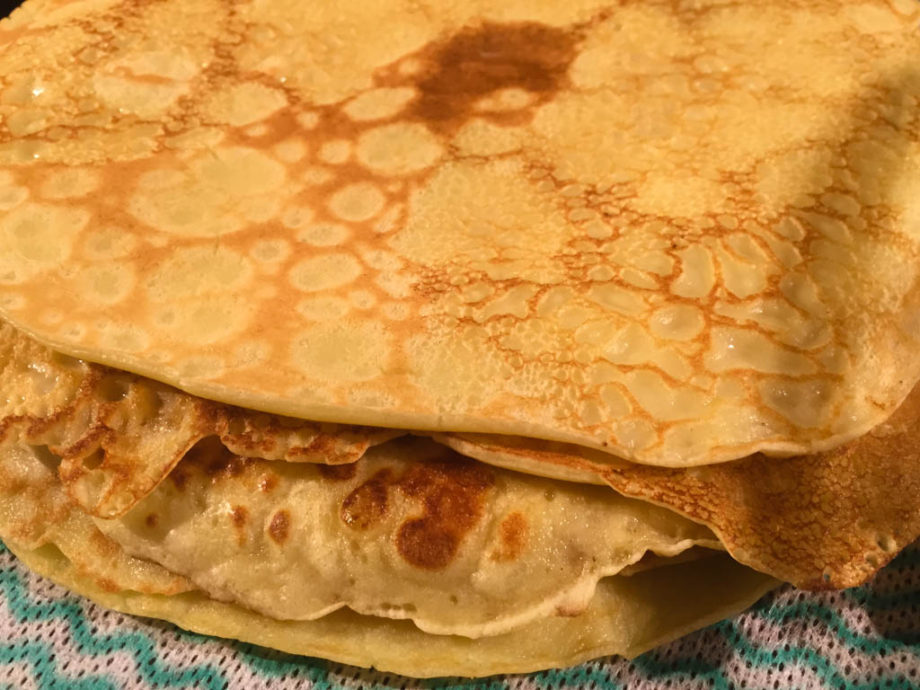 Now to fill the pancakes. The sauce has been in the fridge for a while, “to make the filling easier”. Well, I clearly hadn’t reduced something enough somewhere. The filling is still very liquid. I fill the pancakes the best I could, but much of the liquid leaks out into the dish.

Finally, I pour over more sauce and sprinkle with parmesan, and then into the oven they go. 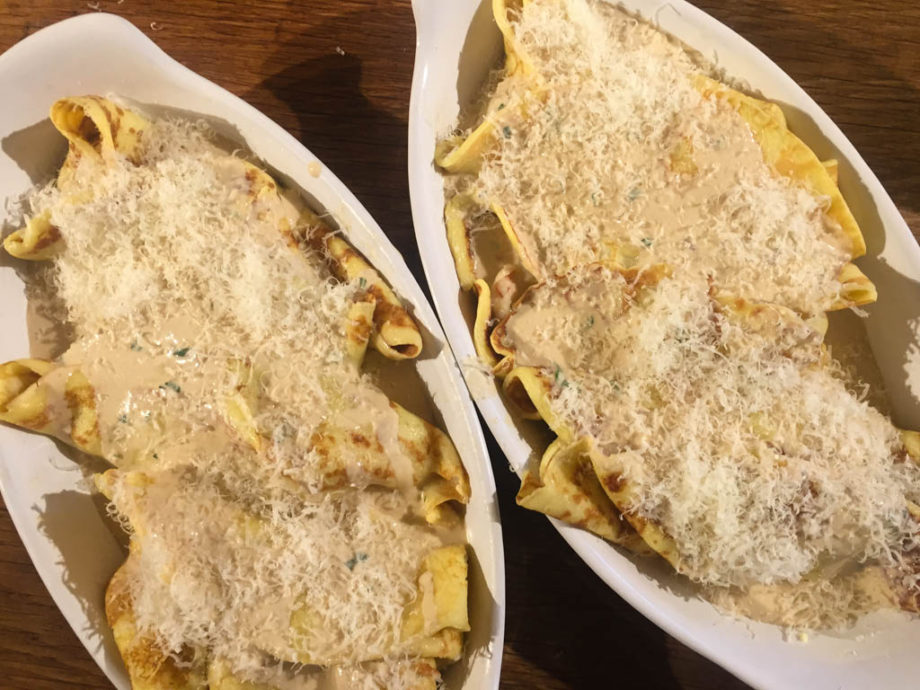 When they come out, they look better than I expected, nicely browned and crisp on top, and when I cut into them, they are beautifully soft inside. And they taste pretty good – a very, very rich intensely flavoured filling. They are delicious, but so rich, that I can’t eat it all. 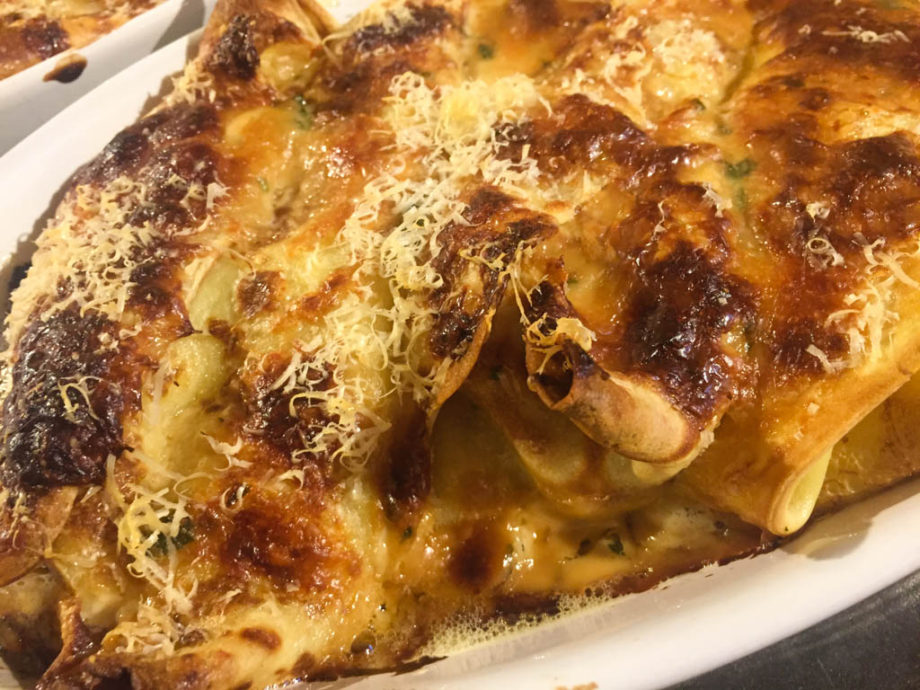 So would I cook them again? I’m not sure. It was a huge amount of effort, and fairly extravagant on the ingredient-cost front. Very tasty, but overly rich. I think I might pass on this particular one in the future, although I could see myself simplifying it a little and making other variations on the same theme.

There was much excitement in the Wilkinson household when a large polystyrene box was delivered full of ice, shellfish and – a lobster!  Cold and confused I’m sure, but soon moving when prodded.  I have to say that they are slightly weird looking creatures, but very beautiful in both construction of the shell and the colours.  At first it looked black but there are blues and reds to be found in the shell as well as some white.

I did feel guilty.  But not guilty enough to drive it back to the sea.  I left the rest of the process to Dave.  And once the deed was done and the lobster cooked, it was still beautiful, only this time in glorious oranges and reds.  Quite a spectacular creature really.  As an aside, I saw a photo of a live blue lobster a couple of days ago.  That was really outstanding too.  A proper blue.  Nature is a wonderful thing.

So, onto the pancakes.  Unlike Dave and many others, I have never had a Findus Seafood Pancake frozen in a box.  So this was a first for me.  Dave spent all day making these.  First the stock for the sauce from all the shells and left-over bits.  Then the sauce (which I tasted before he added the cream and it nearly blew my head off it was so pungent somehow.  Nice, but alarmingly rich for a fish sauce).  It did all smell rather good and I would have loved a warm sunny evening to sit out with a glass of white wine and a sunset to herald the feast.  Sadly it was darn cold as usual.  I had to put the dining room heating on.

So, what were the pancakes like?  I’m a bit on the fence to be honest.  I didn’t think they were that great because everything was mixed together and somewhat drowned in sauce, which was still really powerful even with the cream added, only now it was rich too.  The pancakes themselves were soft of course because they were baked in the sauce.  I found it all a little too mushed together.  I would have loved to eat that lobster on it’s own with a dipping sauce and some nice light veggies.  It was lost in with everything else.  For me, a fish pie would have been more enjoyable.  It was not a fault of Dave’s cooking at all.  Every step of the way was prepared and created with care and skill, it’s just that our pallets and expectations of seafood have changed a lot in the years since a seafood pancake in a restaurant would have been the height of expectation.  We’ve moved on.  We actually like to taste the fish and shellfish rather than drown it all in a sauce together.  The recipe is now dated and probably doesn’t really warrant making anymore.

So as to how I rank it?  I could not fault the cooking of it.  And the ingredients were the best quality possible for a midlands based home.  Straight up from The Cornish Fishmonger on ice.  Lovely.  It’s the recipe I’m marking down for this one.  And I’m hoping for a repeat on the lobster front, with less fuss and bother.