Beef Wellington feels like one of those dishes that needs to be shared, so we arrange a date with some friends and invite them over. I’ve never made a Beef Wellington before, but it can’t be that hard – after all, it’s just a kind of free-standing meat pie, right?

We have six people for dinner, a couple of them with notoriously hearty appetites, so I buy a rather larger piece of beef than the recipe suggests – about twice the size. I figured a bigger beef fillet would just be longer, so it shouldn’t affect the construction or cooking significantly – I’d just need more pastry.

To make life easier, I spread the making of this over two days – it’s going to be a full-blown three-course meal, and spreading the load means I get two relaxed days pottering in the kitchen, rather than a single full-on stress-laden rushed day trying to get everything ready.

Day one starts with the making of a meat glaze. I’ve already documented making a meat glaze, but that batch has long gone, so I need to make more. It’s a lengthy, but straightforward process. There’s not a lot of hands-on time, just a lot of simmering. 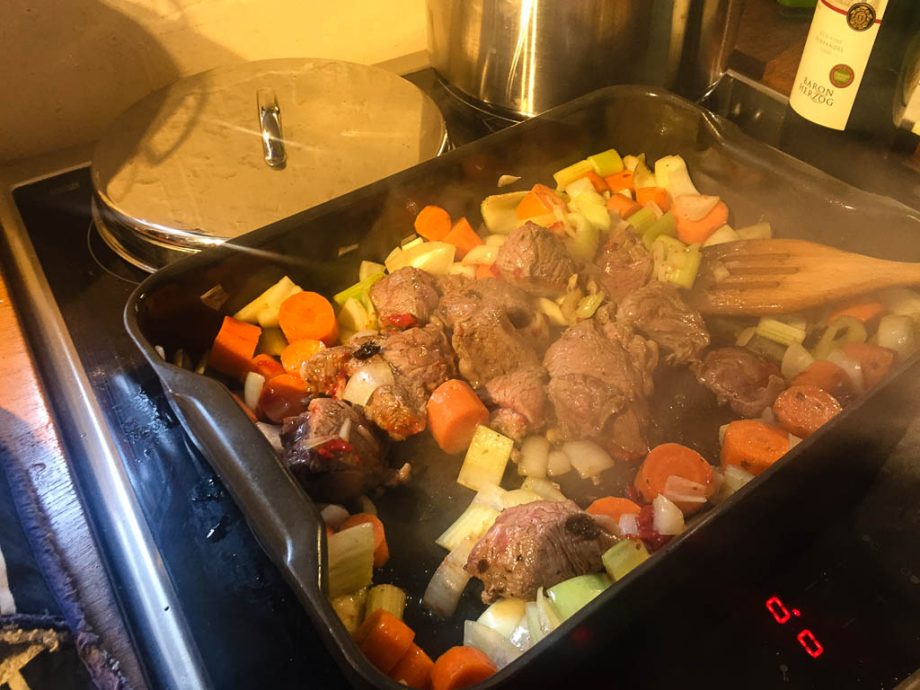 I roast the beef bones, chop some vegetables, add wine and water and simmer for about four hours. I then strain and leave that to cool. 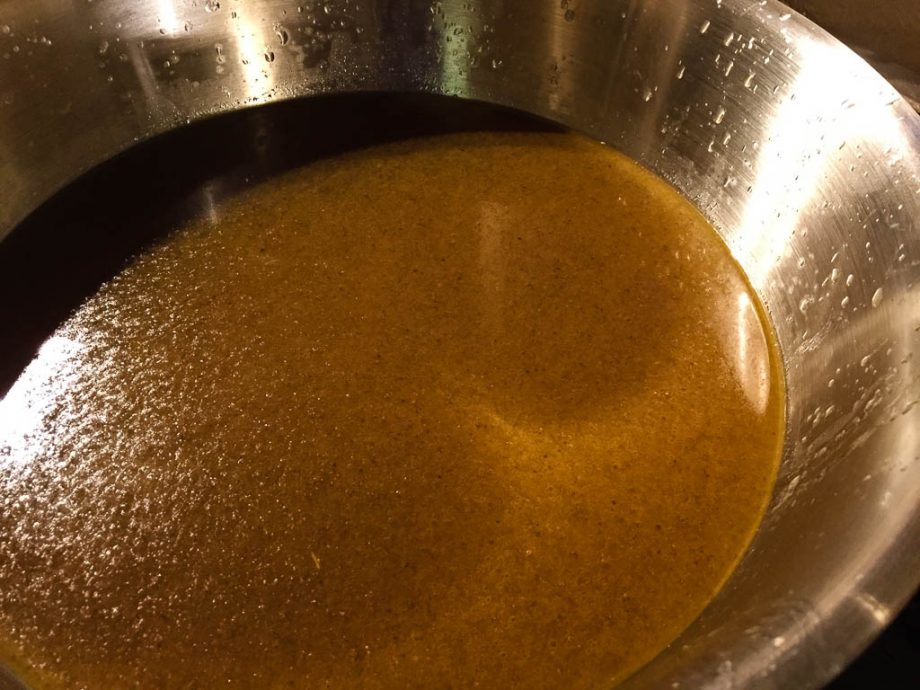 While I’m waiting for all that to happen, I get on with some other components of the dinner – I bake a loaf of bread, make a sponge cake, make a chicken liver pâté, chop some carrots and put them in the sous vide to cook, and finally sauté leeks, onions and red peppers ready to form the base of a gratin.

Once all that is out of the way, I start work on the duxelles – the mushroom-based filling that surrounds the beef fillet. I chop shallots, mushrooms and parsley, and cook the shallots in butter until soft and golden. 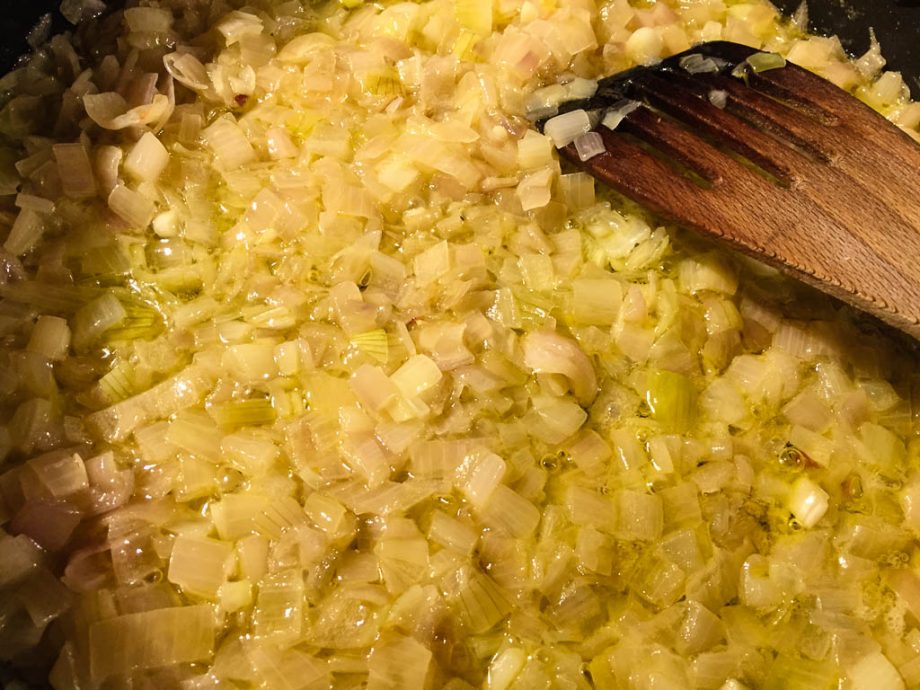 I add the mushrooms, and cook those until they collapse and reduce down. 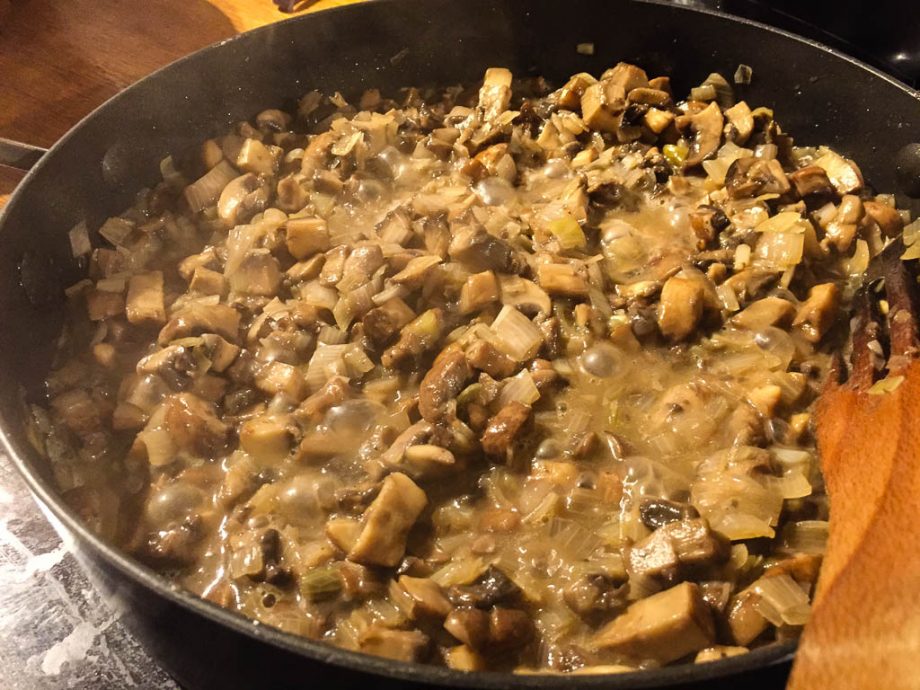 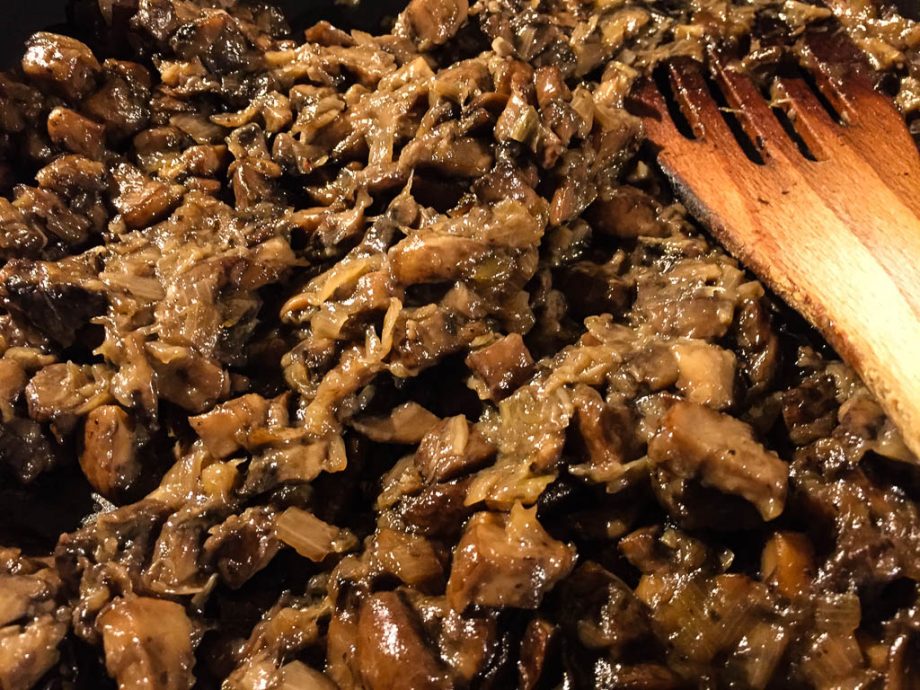 The mushroom mixture then goes into the food processor, along with the parsley, and blitzed until it forms a coarse paste. I let it cool and put it in the fridge overnight. 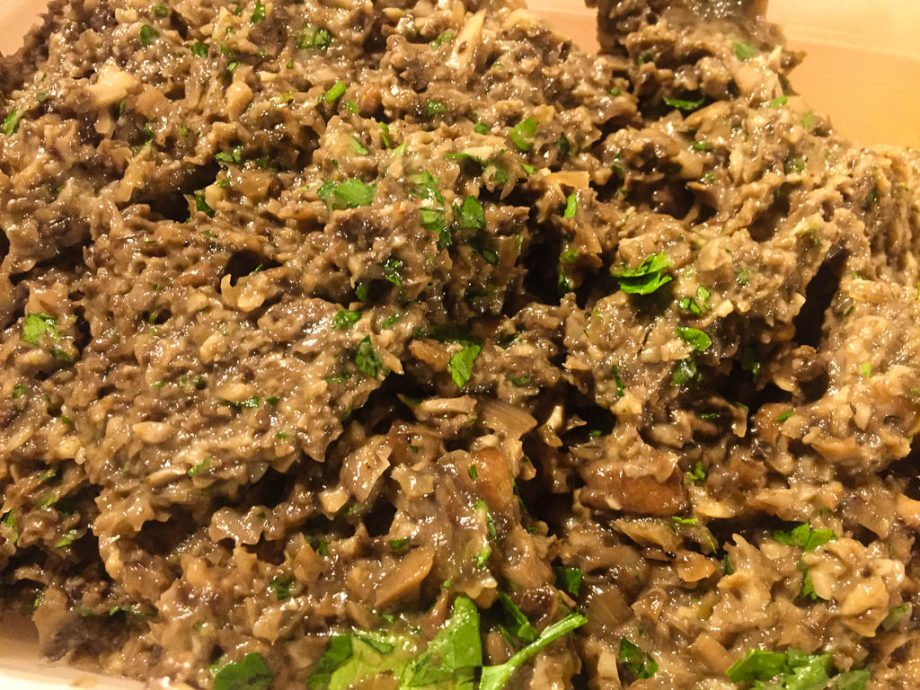 Day two kicks off with the meat glaze. I take it out of the fridge where it sat overnight, and removed the disk of fat now set on the surface, poured it into a pan and left it to simmer – it needs to reduce to a fraction of its current volume. 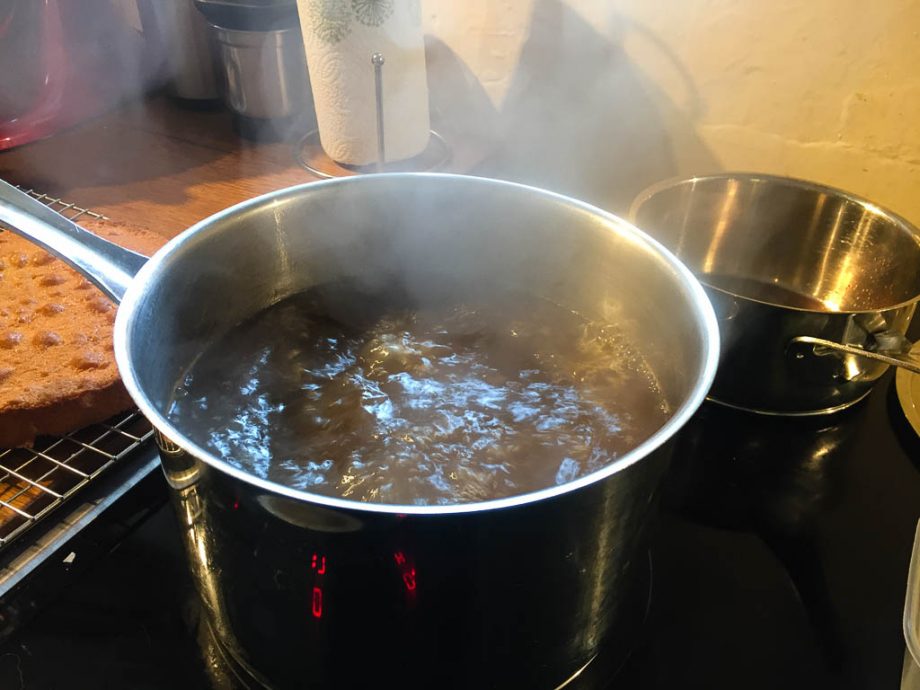 Some little while later, the vat of glaze now fits easily into a small jug. 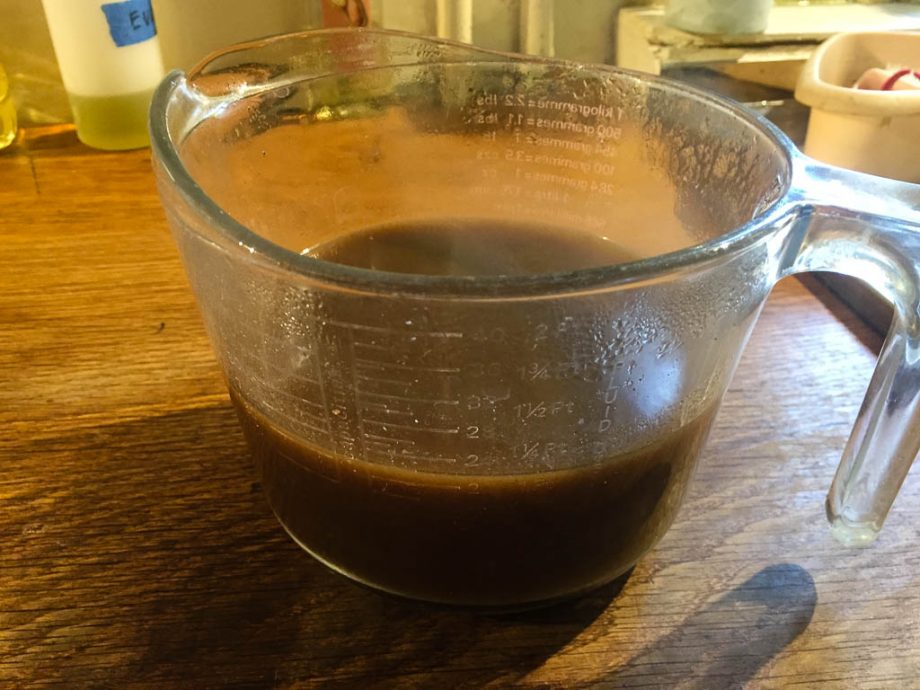 Next, I prepared the sauce – this was just some of the meat glaze and a large amount of Madeira, reduced, with a little arrowroot stirred in at the end to thicken.

So, now to move on to the Wellington itself. I grate some semi-frozen butter into a bowl of flour. 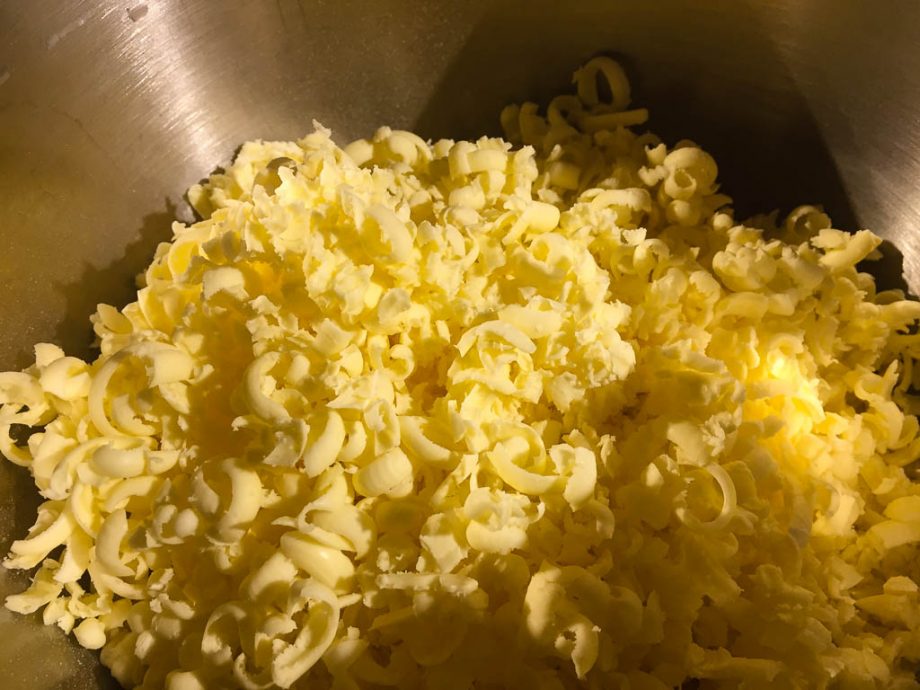 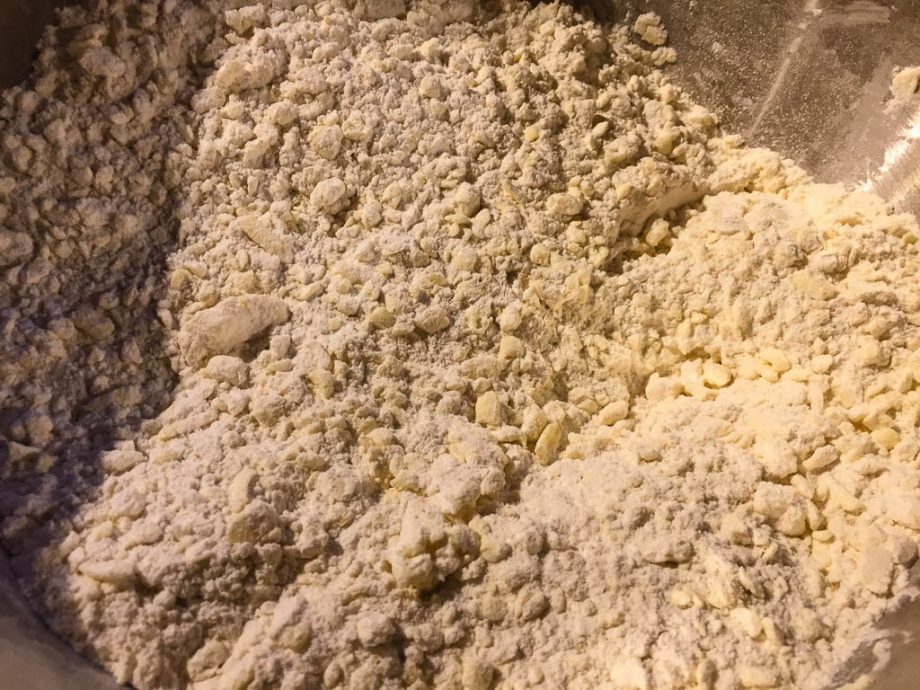 And then add water to bind it all together. 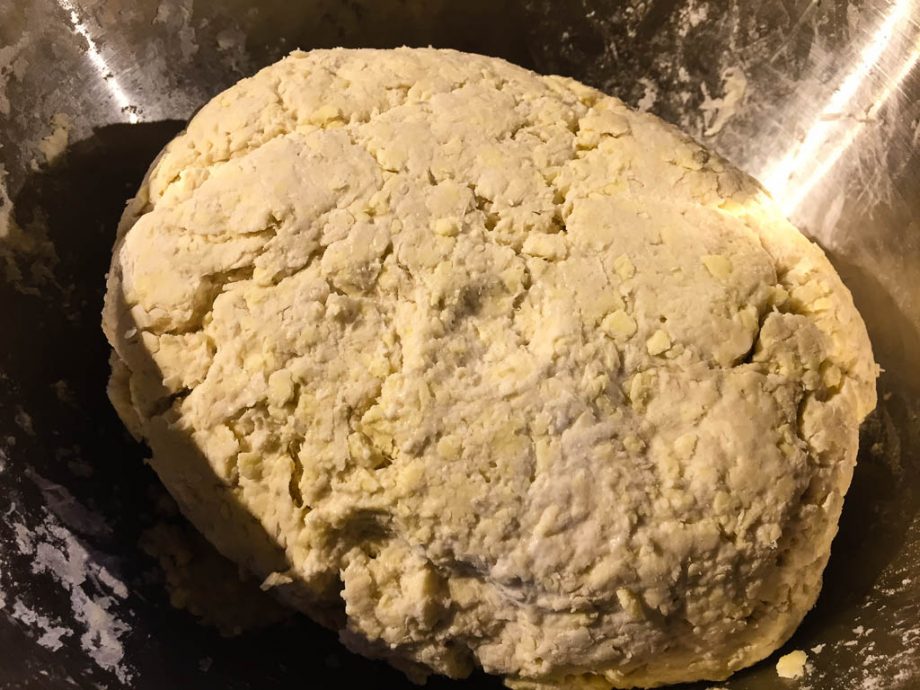 The pastry then goes into the fridge to chill.

Meanwhile, I take my beef fillet 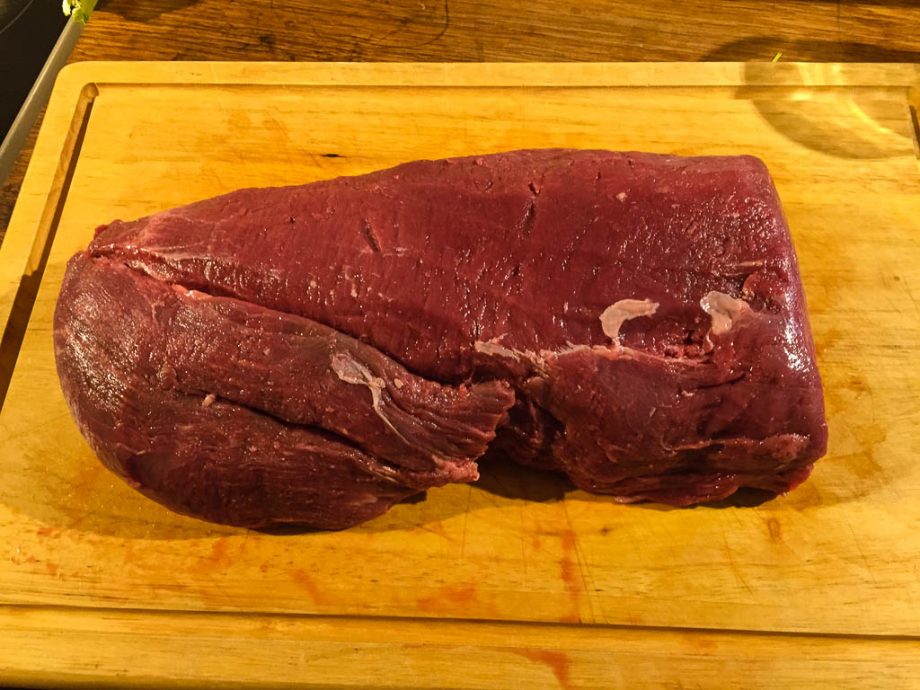 And sear it in a large frying pan. 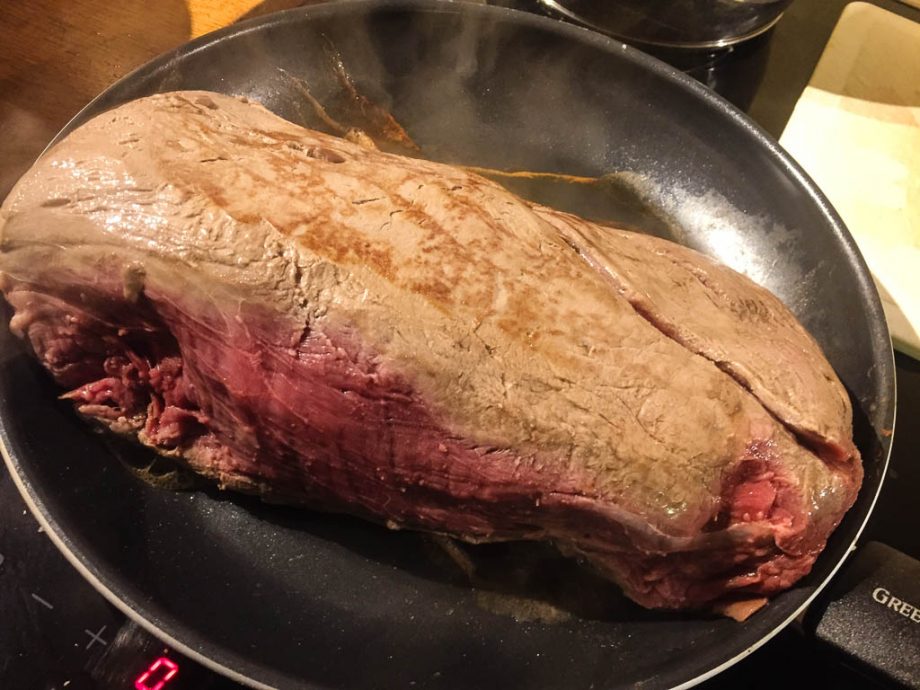 I roll out the pastry and brush with egg. 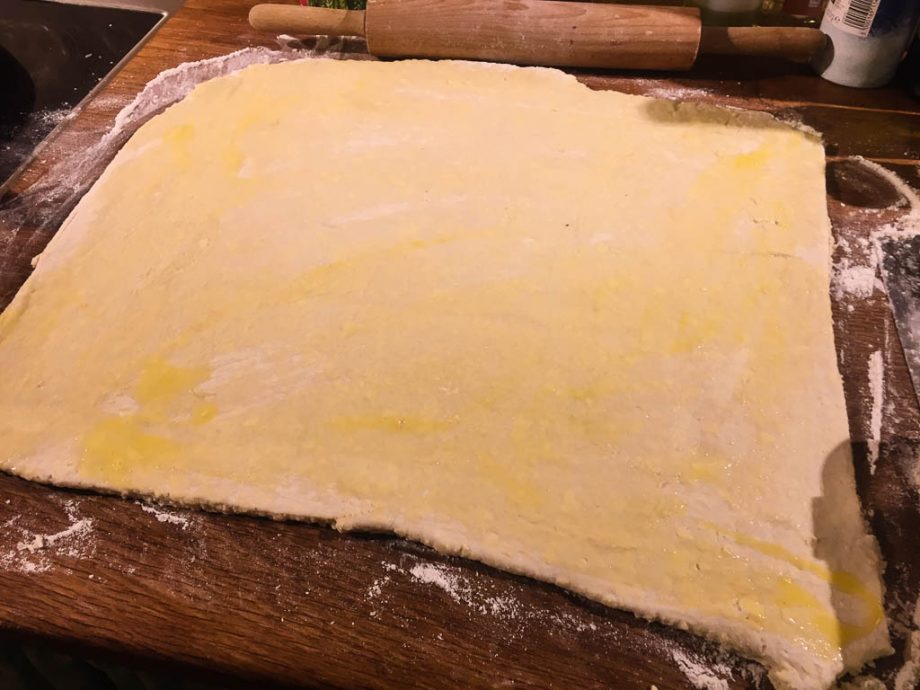 Spread the duxelles evenly over it. 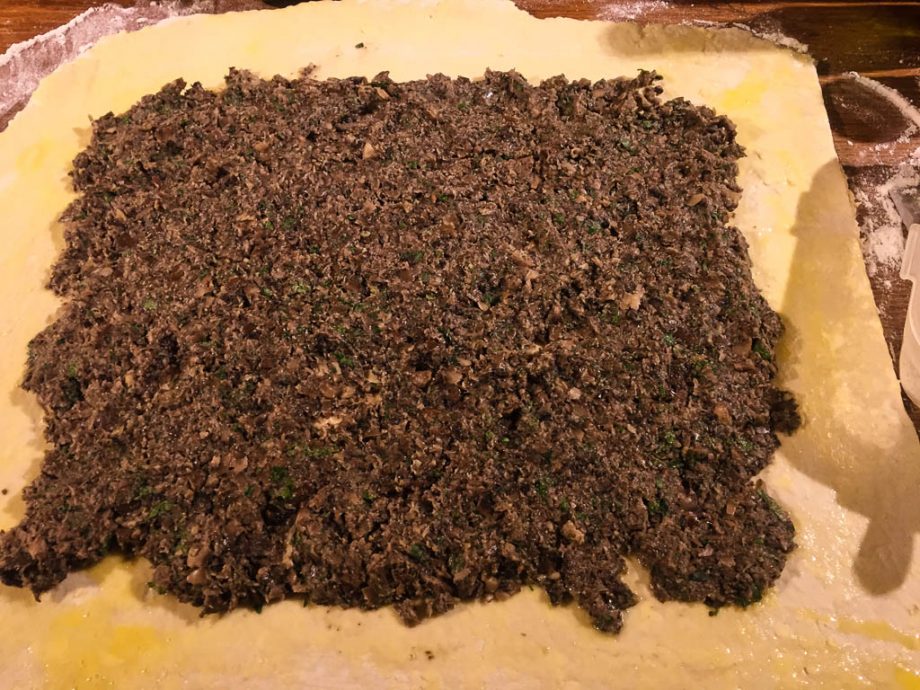 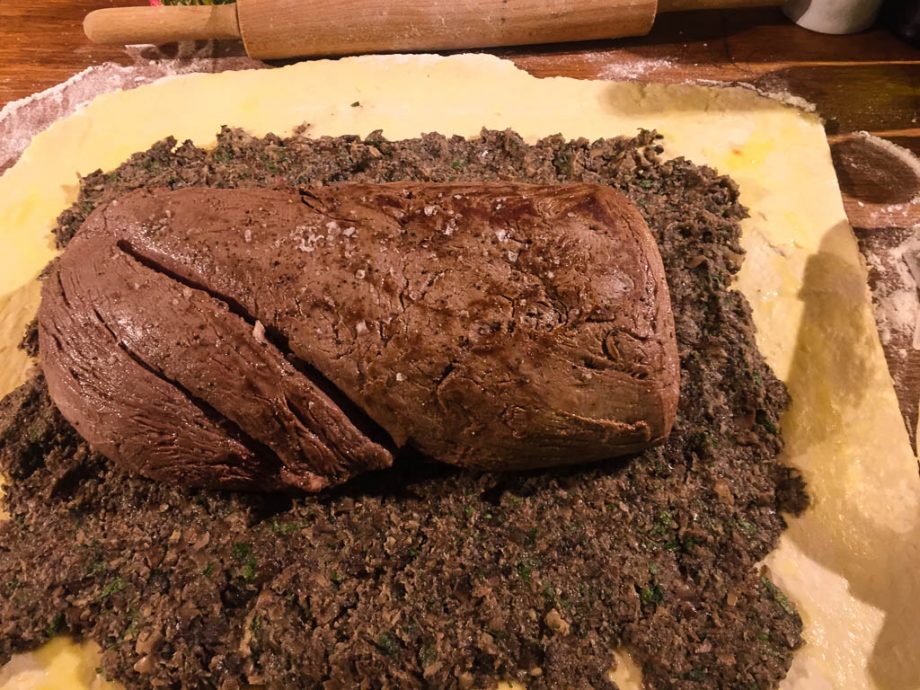 And roll up into a cylinder, carefully sealing all the edges. 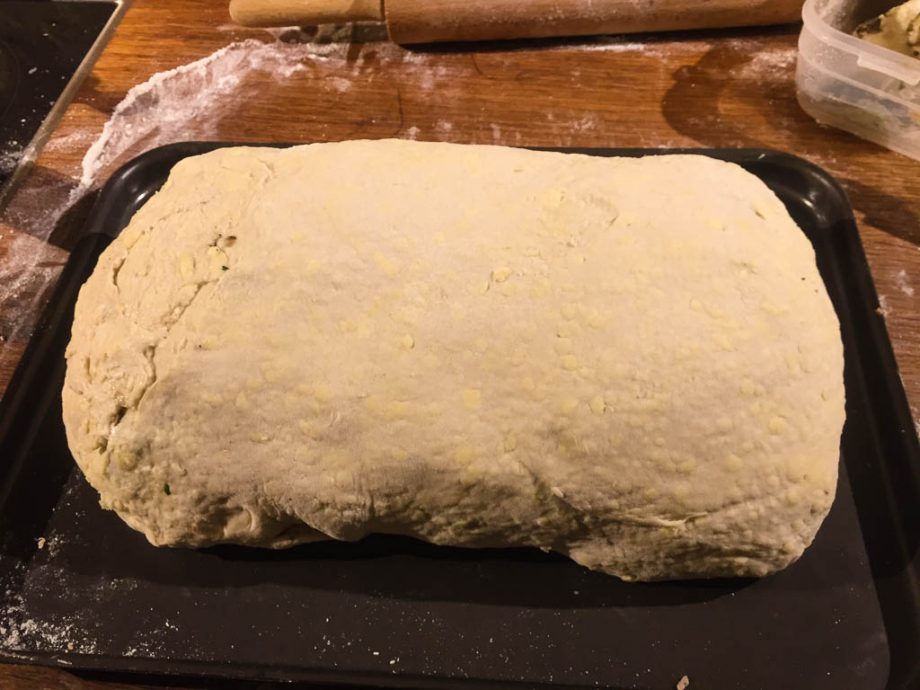 Finally, I lightly score a pattern into the pastry and brush with an egg wash, and we’re ready for the oven. 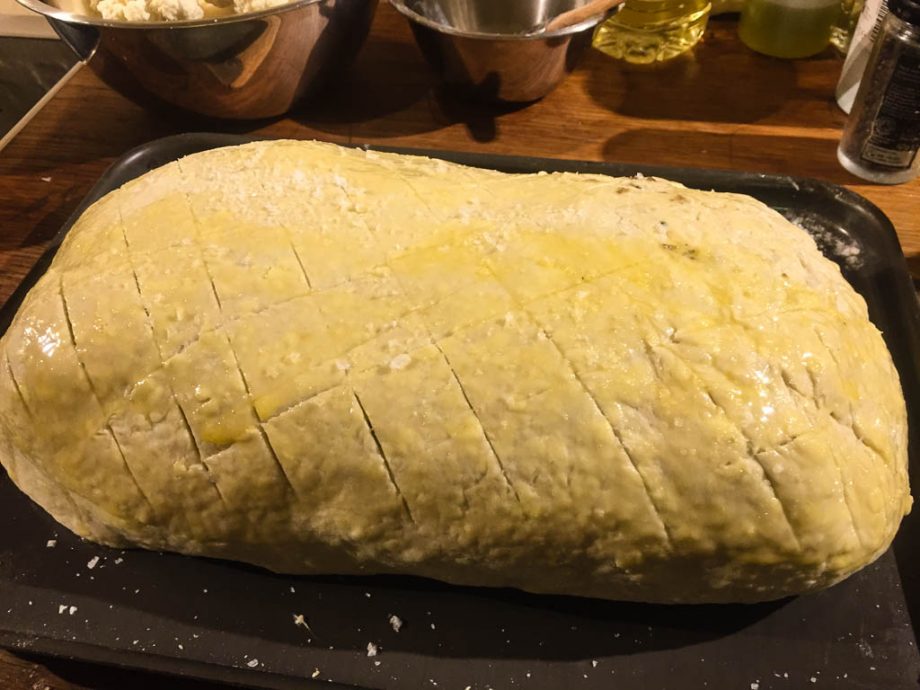 Now, the recipe said 30 – 40 minutes to cook, and I felt that sounded a little optimistic. Still, I’d check it at forty minutes and give it longer if needed.

After only ten minutes in the oven, however, it was clear that things were starting to go badly wrong. I could see that the pastry had split in several places and was slowly sliding down the sides of the beef. Huge chasms opened up before my eyes. Well, it was too late to do anything about it now. I could only sit and watch, hoping it would hold together at least a little.

Once the beef was out of the oven, I could survey the damage properly. This wasn’t really a beef wellington any more. It looked rather more like a roadkill wellington – it certainly looked like it had been in a very nasty accident. 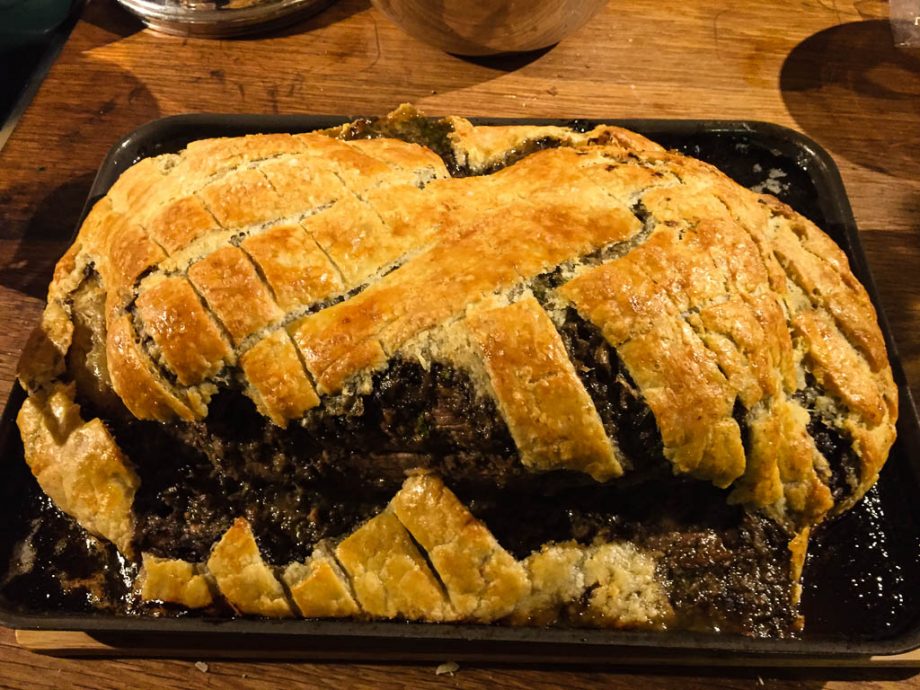 I cut it into slices the best I could, but it wasn’t easy, and there was clearly no way that pastry was going to stay attached. In the end, I just pronounced it a Deconstructed Beef Wellington and went with the flow. 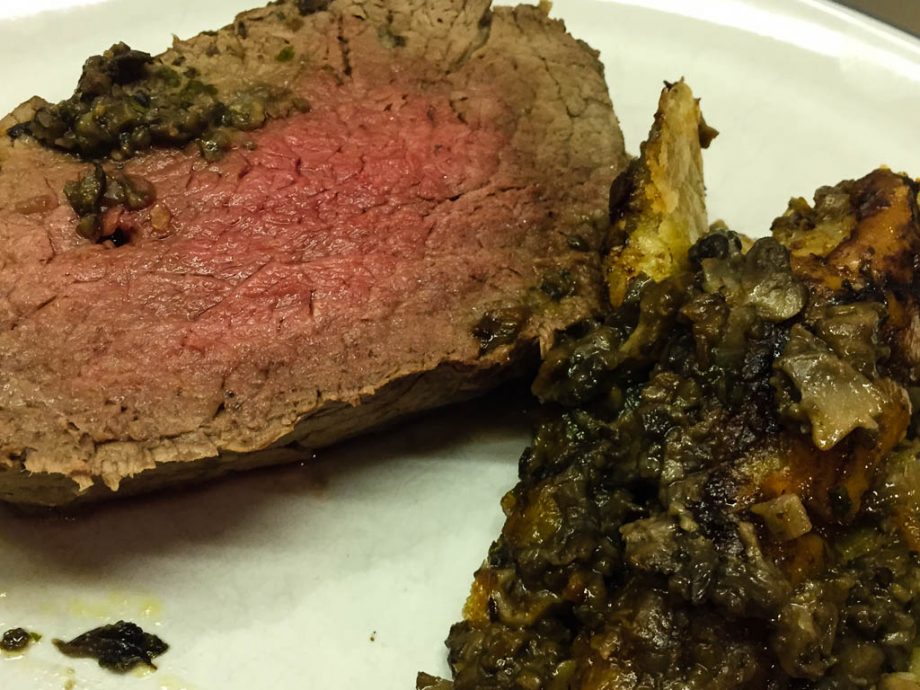 I served it with garlic roast potatoes, glazed carrots and cauliflower gratin. Now, whilst this certainly wasn’t the most elegant plate of food I had ever served, it really was rather tasty. The beef was beautifully soft and tender, the pastry crisp, and the duxelles delicious. It really didn’t matter that the Wellington itself was a disaster, the end result still tasted good. In the end, we all ate well, and we had a good time. That was all that mattered.

Well, this one was a long time coming. Mainly because Dave was a bit afraid of it I think, and because it’s a huge thing and needs organising in advance with a willing set of diners to help eat it.

The diners were sorted without too much problem.

The meat was ordered and the day came when it arrived. HUGE!

Dave took the Friday off work simply so that he could prepare this meal. There’s dedication. He also made a starter and pudding of course, but it took almost a whole day to prepare the stock and the duxelles mixture. The house smelt wonderful. The kitchen looked like a bomb had gone off.

On the day itself he was a bit stressed around the wrapping of the meat in the mushroom and pastry mix so I left him to it. But eventually it was ready for the oven and we all got to see it then. It looked like a feather pillow, it filled the large baking tray. It takes so little time to cook this beast that I was worried it would be underdone. But it wasn’t.

There was an issue with the pastry, and nobody really knew why, but it slipped off in places. So the end result was not worthy of a table parade and Dave served it in the kitchen. HOWEVER! Scrappy looking or not, this was a fine, fine dish. The meat was perfectly cooked, the pastry crisp and the mushroom duxelles was so full of flavour. Every mouthful was a delight from start to finish. It really is a delightful way to cook a big piece of beef.

There were no dissatisfied diners that I could see.

Dave has said he’s going to try mini individual ones for us to try to see if he can work out why the pastry slipped on the big one. I will look forward to that. But ultimately I suspect this is a dish that needs to go large for the beauty of the flavours and the perfect cooking of the meat.

Would I eat that again?

8/10 (only dropped 2 points because of the pastry issue.