I’m not really that into desserts, I much prefer the savoury courses, but there are a good few sweet things to make in The Prawn Cocktail Years, so I guess I’d better crack on with some of them.

I have made profiteroles before, but not in very many years, so it’s a long time since I’ve tried making choux pastry. Still, I seem to recall it was pretty easy, so this should be a doddle.

Choux pastry starts with heating water and butter together in a pan and bringing it to a boil. 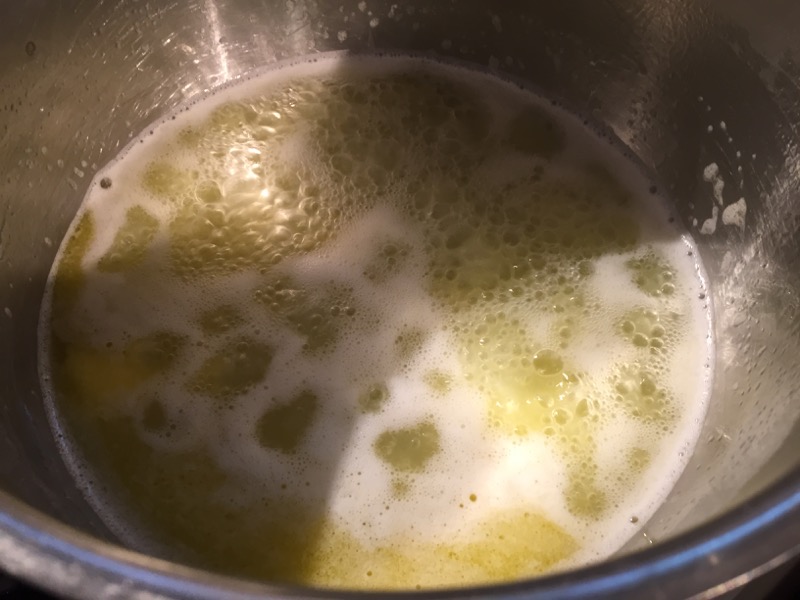 Next I add flour and stir vigorously until it’s well mixed. 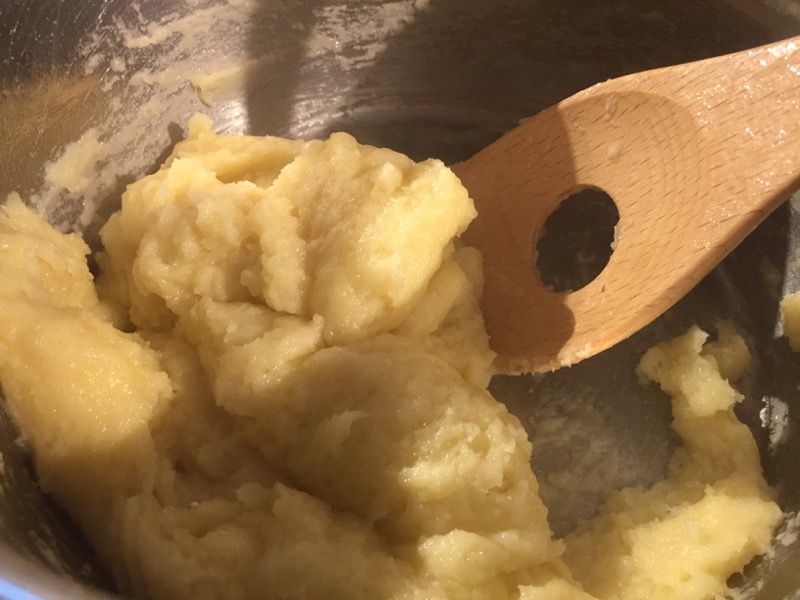 After it has then cooled a little, I beat in some eggs, until the mixture is thick and glossy. 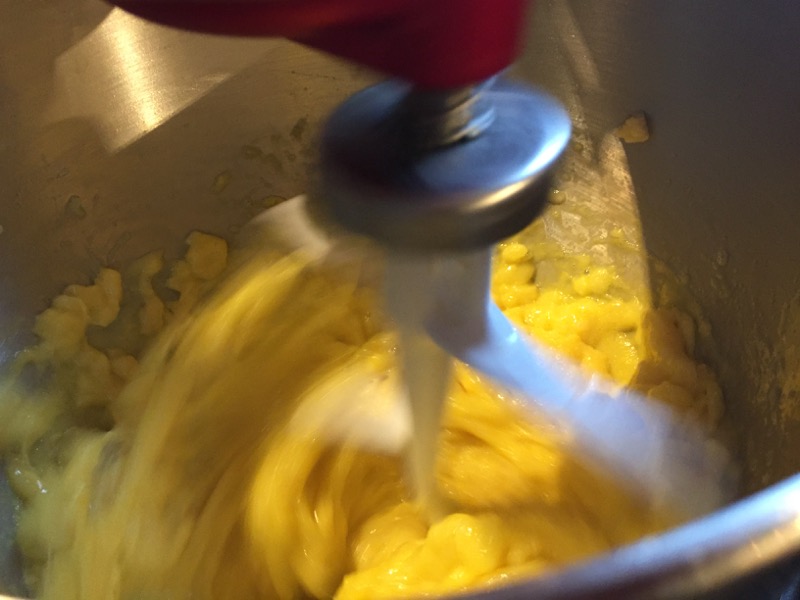 Then, I put the paste into a piping bag and leave it to cool a little more. 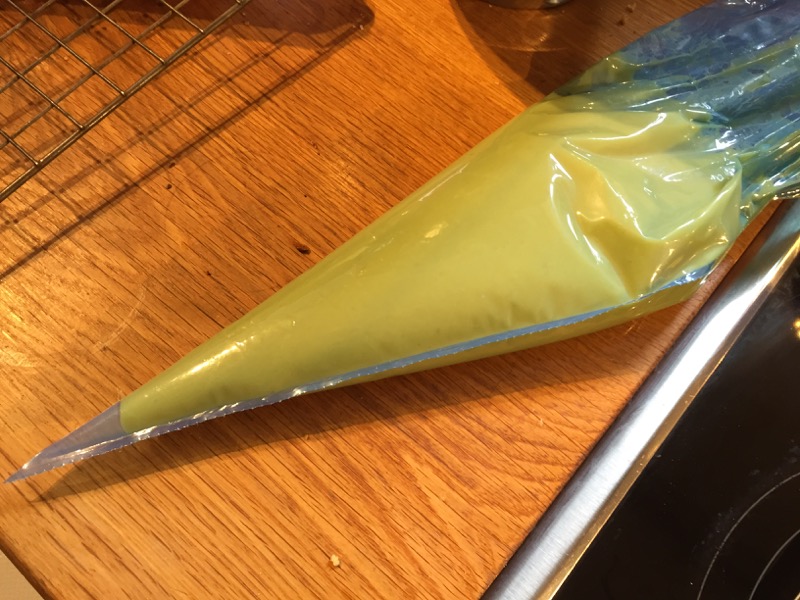 Next, I pipe out the little choux buns. Well, I can tell straight away that these don’t look good. The mixture is too runny, and it immediately pools into small flat circles. These aren’t going to work. 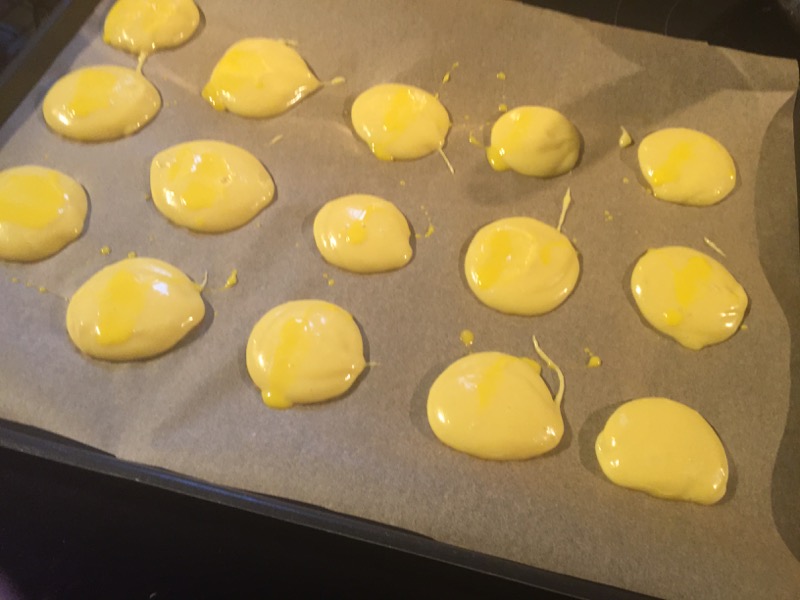 Still, I try baking them just to see. I was right, they come out too flat. They’re supposed to be puffy little balls, not flat disks. I was so disgusted with them that I forgot to take a photo – I’m afraid you’ll just have to believe me.

I set them to one side and decide I’ll just have to make them again. I think they probably had too much liquid. The recipe calls for “3 medium eggs”; the eggs from our local farm are actually pretty large, perhaps I should just use two of those.

So, I try again, this time with two eggs instead of three, and when I pipe the paste out onto a baking tray, it looks much more promising. These stand proud rather than immediately wilting into a flat circle. 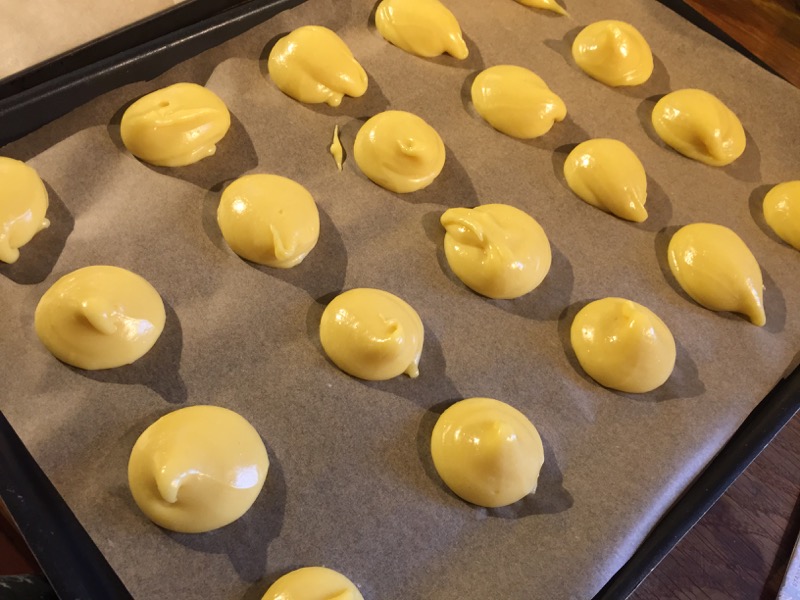 After baking, they look good. Now these are worth taking a photo of. 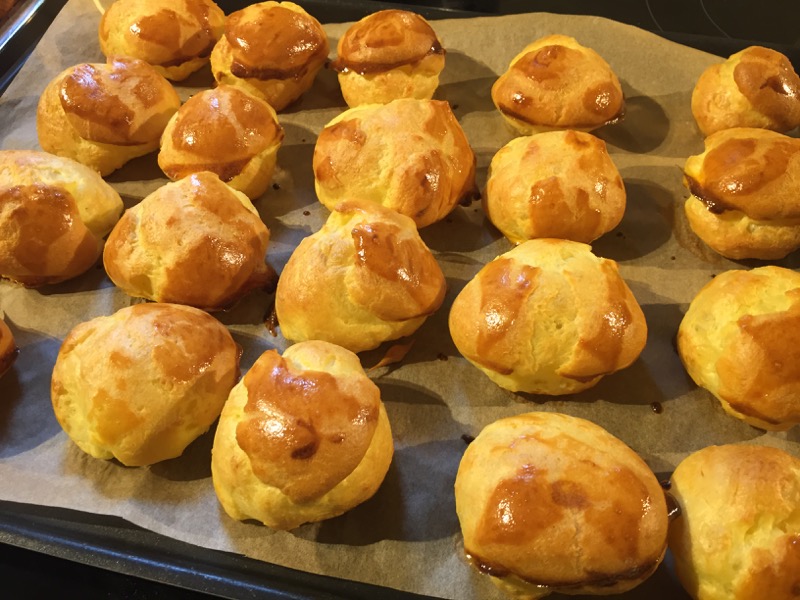 Now for the filling. Reading through the recipe, I see that this is essentially a chocolate custard. I cream egg yolks and sugar together, melt chocolate and milk together, and then combine the two, stirring over a low heat until the mixture thickens and starts to boil. Finally, I beat an egg white until stiff, stir it gently into the chocolate mix, and cook gently for a couple of minutes more before leaving it to cool. 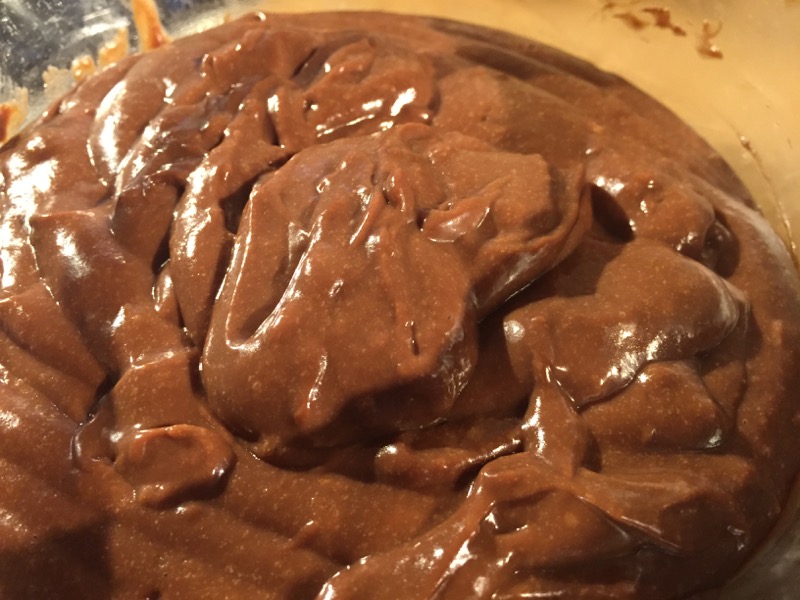 Once cool, I stuff some of the profiteroles with the cream. Having to make these twice must have been taking it’s toll at this point – all I seem to have to show for this stage is a rather blurry photograph. 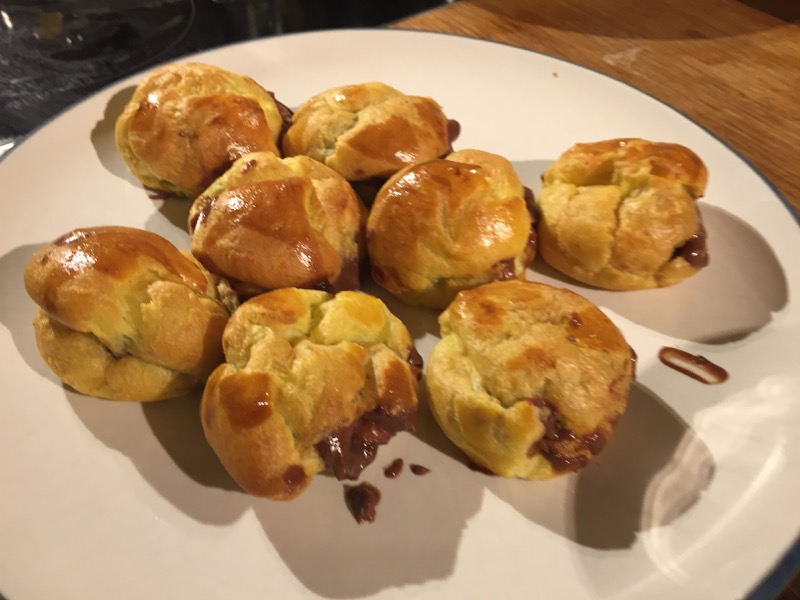 Lastly, the sauce. I melt chocolate and water together with some sugar, and then simmer gently until thick and syrupy. 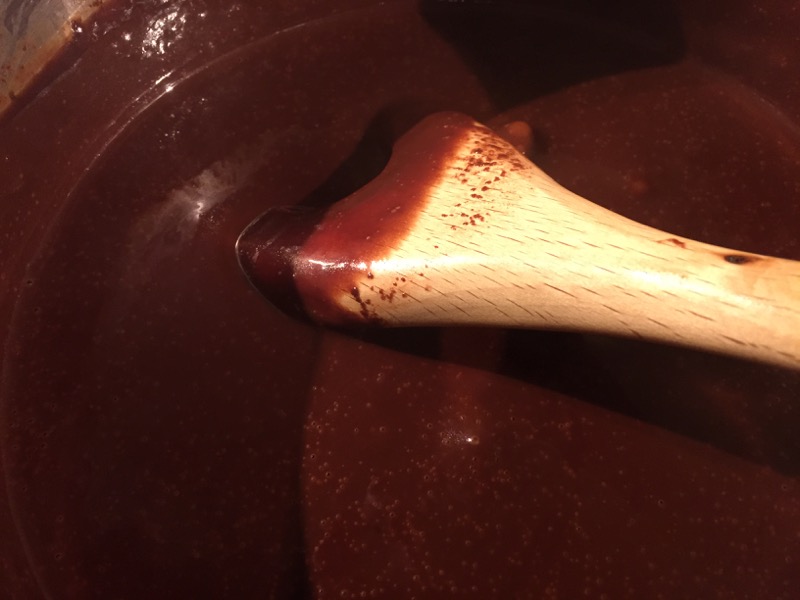 I serve the profiteroles in a bowl, and pour the chocolate sauce over them. 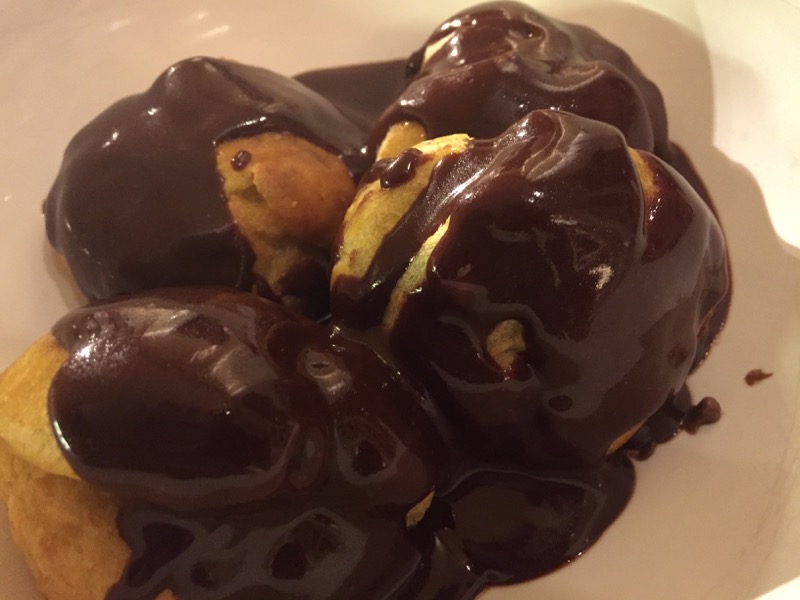 So, how were they? Well, they were fine I guess. The pastry was softer than I would have liked, and to be honest, I found the combination of hot sauce, poured over room-temperature soft pastry, filled with chilled chocolate cream to all be a bit weird. It wasn’t unpleasant, just odd, not something I’d normally choose to eat. But, then, as I said, I’m not really that into desserts.

I think Dave has realised that if he’s not careful he will finish all the savoury dishes in this book and be left with a pile of puddings! So we had a light dinner yesterday of Thai beef salad (absolutely delicious but of his own concoction so not from the book) and then we had pudding. This is described in the book as 1960’s Bistro.

I love profiteroles. And I can actually make them! Which is saying something these days.

His first batch looked glossy but didn’t rise enough so he did them again. We can have problems following recipes because the eggs we get from the organic egg farm down the road are HUGE! We think the eggs just made it too wet. So he left one out of the second batch.

They looked lovely and golden. But, if I dare say it, they should have been crisper. These were quite soft, even though he didn’t fill them until we were ready to eat them.

Then there was the filling. To my mind it was untraditional. It was a chocolate cream filling. Nice, but I would have preferred plain whipped cream to be honest.

Mind you, the above didn’t stop me having some this morning before leaving for work!

One Response to Profiteroles