By dopiaza on 2nd July, 2016 in The Fifties Hotel Dining Room

Peach Melba is another of those recipes in The Prawn Cocktail Years that I’ve just never bothered making. This time, not because it looks too complicated, but because it looks too simple. I mean, it’s peaches with ice cream, topped with raspberry sauce – not exactly fancy. In fact, it always sounded a bit boring. As I’ve said before, I’m not really a dessert kind of person anyway, so I’ve never bothered with this one. Still, I may as well try it now – shouldn’t take too long, it looks pretty easy.

Of course, it immediately gets more complex. First I have to make the ice cream. It’s a pretty standard vanilla ice cream recipe. I heat the milk and vanilla pod together and leave to infuse for a while. Meanwhile, I beat egg yolks and sugar together. 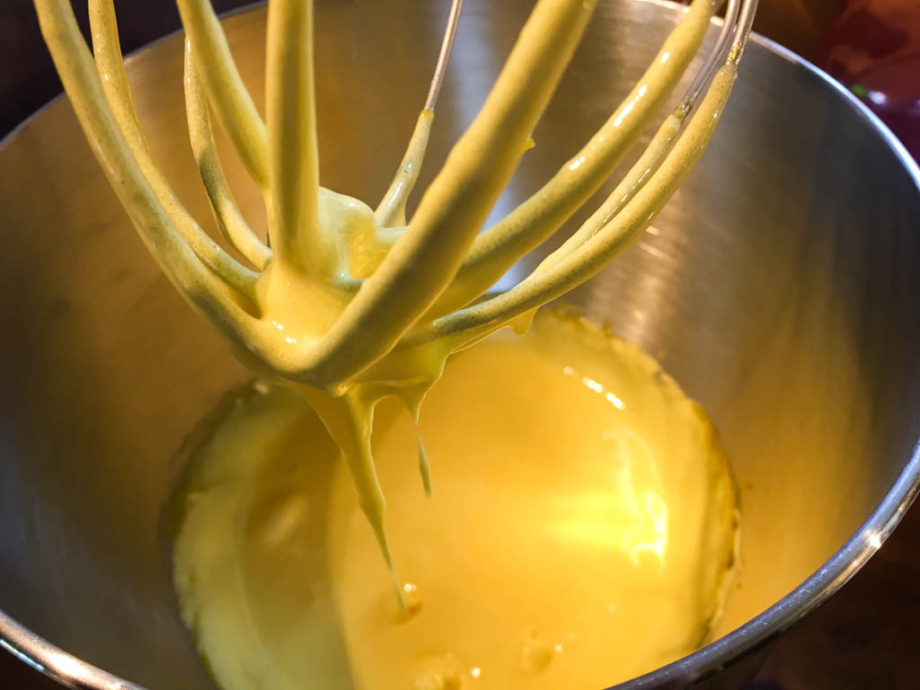 Then, beating all the time, I pour the vanilla milk into the mixture.

I return to the pan and heat gently whilst stirring until it thickens a little and then strain it into a bowl, whisk in the cream and leave it to cool. 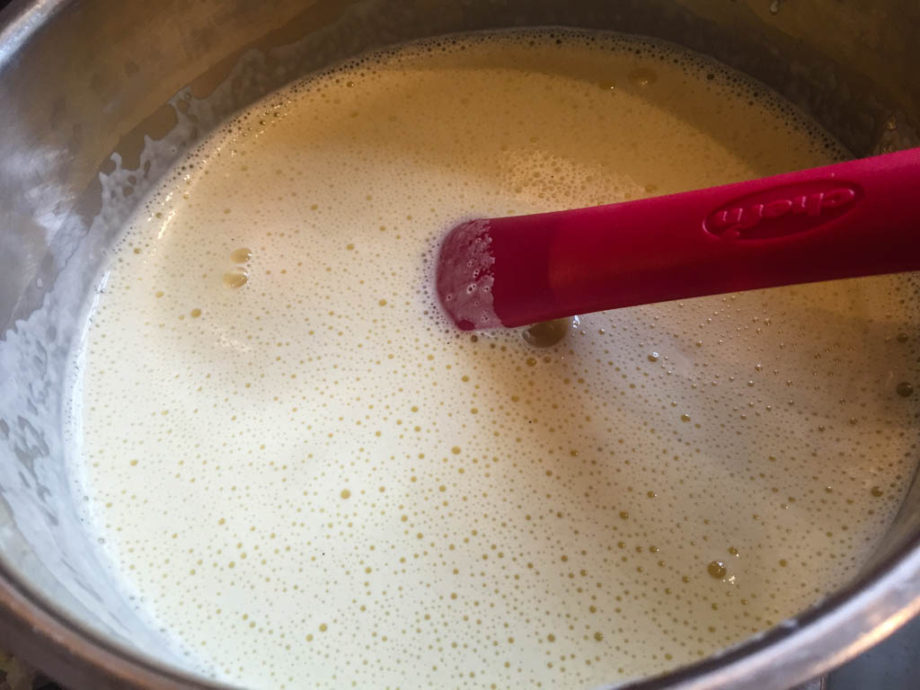 Once it’s cold, I get out the ice-cream maker and put it to work. Now, I hadn’t really paid too much attention to the quantities here – I just followed the recipe – but it suddenly became apparent that this recipe makes a lot of ice cream. I end up having to churn it in the ice-cream machine in two batches. I taste it. Well, at least it’s good ice cream. No, I take that back. This is really good ice cream. 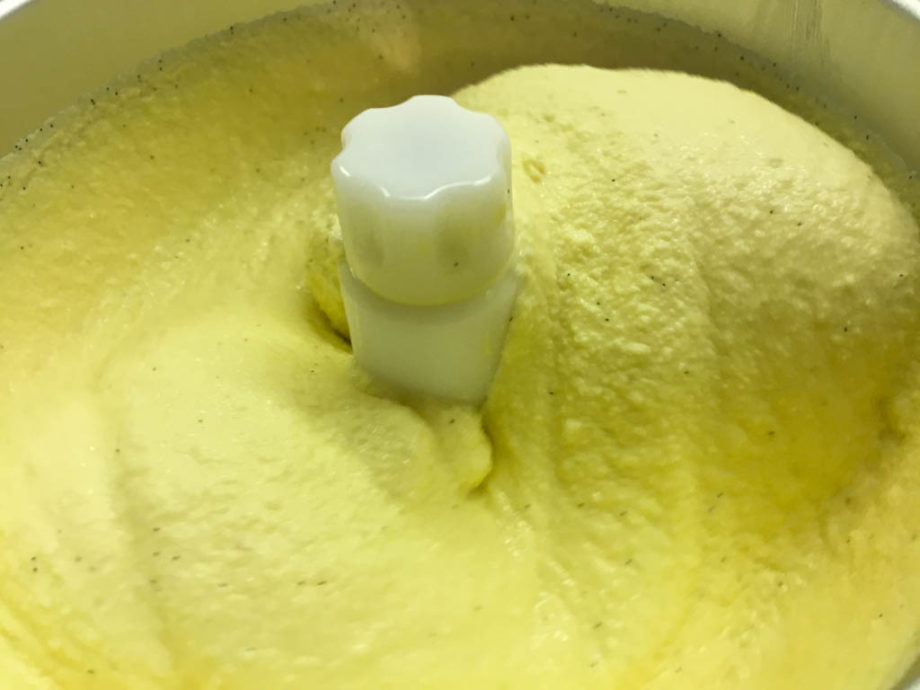 The ice cream goes into the freezer to finish freezing. 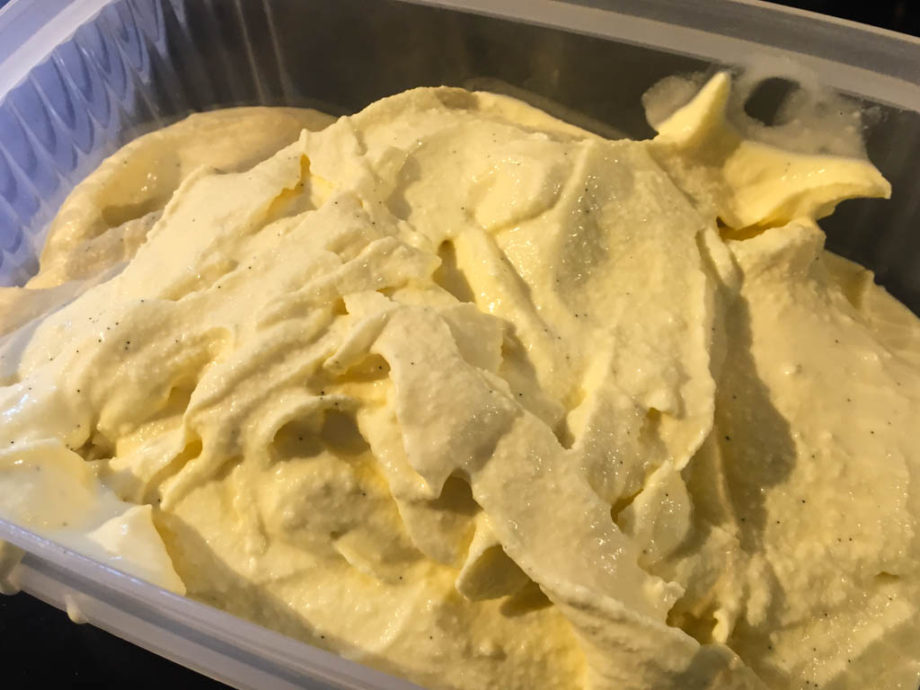 So, whilst that’s freezing, I attend to the peaches. The recipe calls for “2 fresh ripe peaches (preferably white ones).” Now, peaches in this country are unreliable at the best of times, they either have the consistency of small cannonballs, or if you’re really lucky, dry, flavourless cotton wool balls. I did, however, recently have some really nice peaches from Riverford – a variety I’d not come across before called doughnut peaches. They were delicious and I thought they’d be perfect for this recipe. They’re rather smaller than regular peaches, so I use four instead of the two suggested. 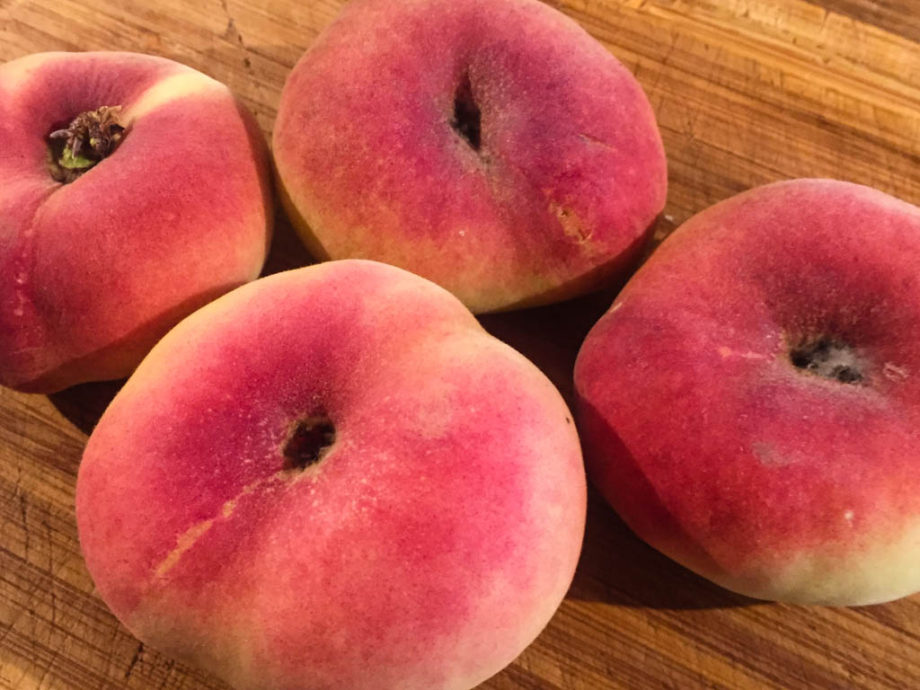 First, I have to blanch and peel the peaches. Regular readers here will recall just how tedious I find peeling tomatoes. This is equally tedious. These peaches aren’t quite as ripe as the previous ones I bought, so the skin sticks in places. I end up using a potato peeler on the more stubborn bits. 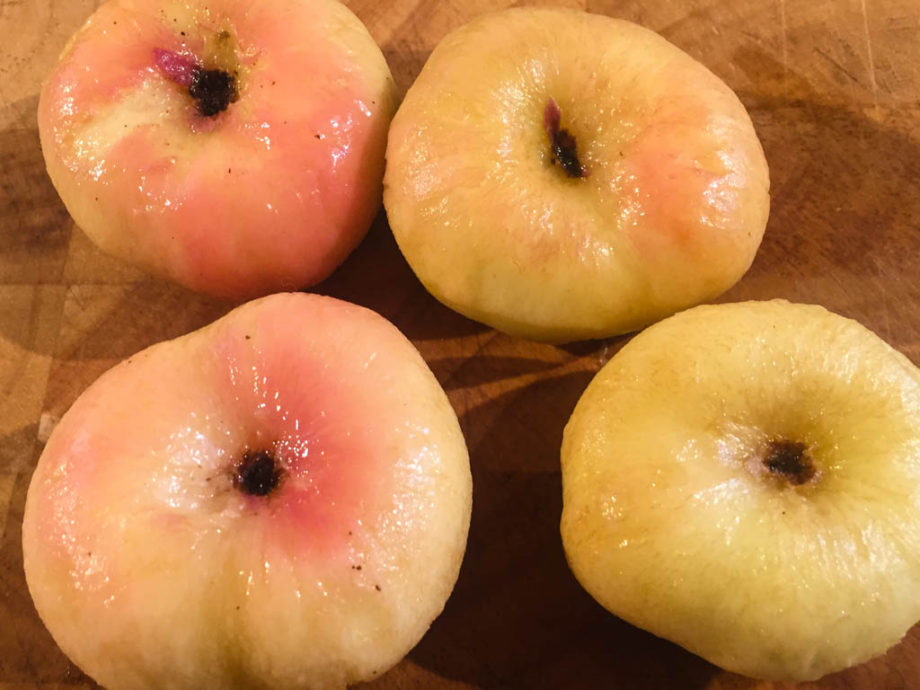 Next, I put some white wine and sugar in a saucepan and poach the peaches for a short while, and then leave them to cool in the syrup. 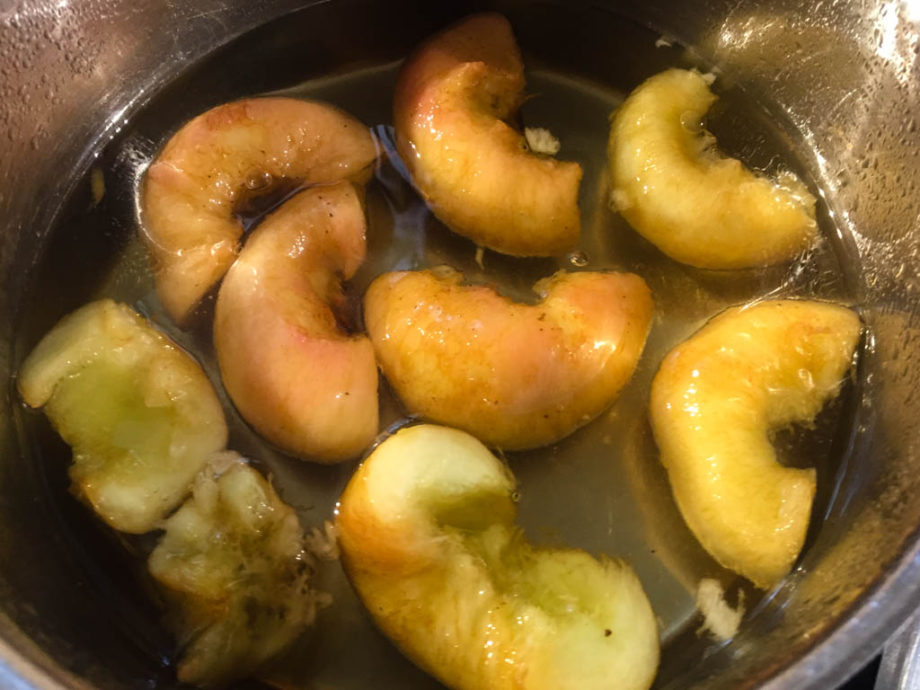 Once cool, I remove the peaches – perhaps doughnut peaches weren’t a good idea here – they are very flat and some of the thinner pieces are starting to break apart after the poaching. Oh well, they may not look as pretty, but I’m sure they’ll taste just fine. 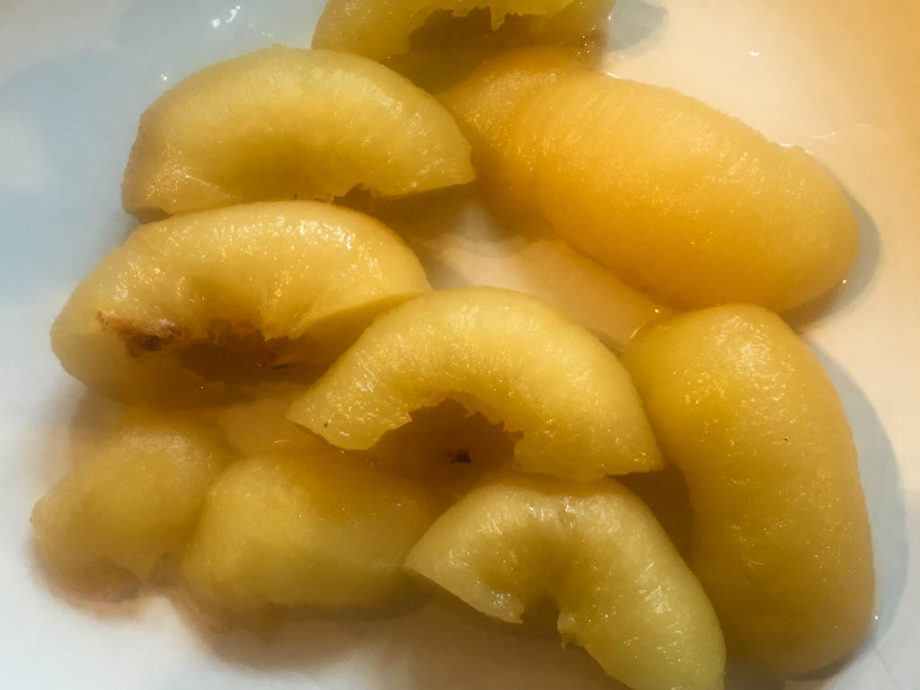 Finally, I add raspberries to the syrup, whizz together in a blender and then sieve to remove the seeds. The peaches and raspberry syrup go into the fridge to chill. 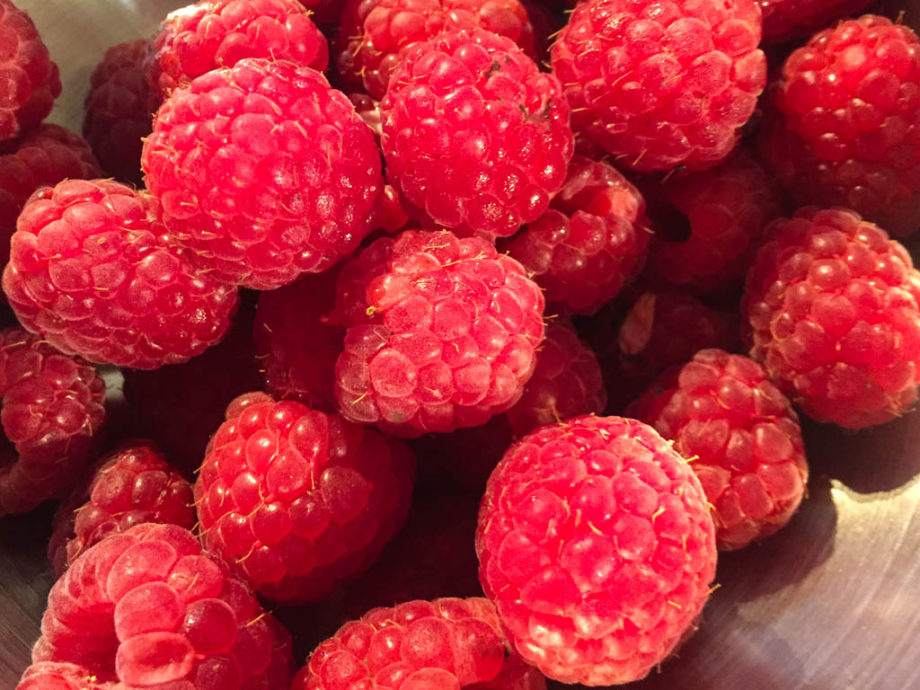 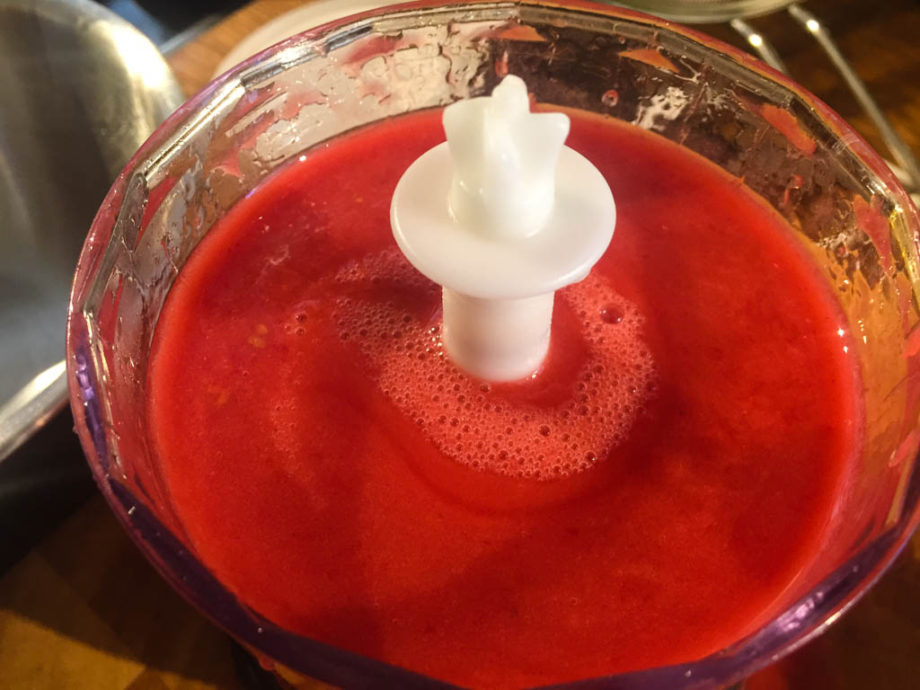 To serve, I put a scoop of vanilla ice cream in the bottom of bowl, top with a couple of pieces of peach and then spoon over a generous covering of the raspberry purée. Well, I may have been unsure when setting out on this recipe, but I was absolutely certain now. This recipe is absolutely delicious. To say I was blown away by how good it is would absolutely be understating things. This is one of the best desserts I’ve eaten in a very long time. It certainly is true that for deliciousness, you don’t need lots of elaborate complexity. Sometimes, just a few good quality ingredients, prepared simply and well, really are all you need. A very simple recipe to make – especially if you already have some decent ice cream in the freezer. Definitely one to recommend.

Wow!  What a popping flavourful dessert this was.  I had no idea something so old-fashioned sounding could be so nice.  It was just bursting with fruity flavours.  The raspberry sauce was delightful.  And a good homemade vanilla ice cream is always a wonder to the taste buds.  But the peaches themselves were also delicious.

Overall the flavour profile was strongly raspberry, with more than a hint of peach and then the cooling creaminess of the ice cream to round it off.

I was surprised by this dish.  It was so sophisticated and summery.  I have no idea why this has gone out of fashion.

Leave a Reply to Dawn Click here to cancel reply.